Twitter tough guy takes shot at Jon Stewart, gets run off with his tail between his legs.

Why does EVERYTHING have to be Trump with Kimmel? What do you suppose Freud have to say about such a fixation?

As you know, one keen-eyed observer on the internet noticed that some big hedge fund companies were heavily shorting Gamestop to drive down the price — with the plan of snapping it up again at a significant discount and pocketing the profit. (For anyone wondering what happened, this thread explains the Gamestop story from the first guy noticing the trend, to the role Wall Street bets played, to what followed next.)

A number of young, unorthodox, internet-savvy investors got wind of it and decided to throw a wrench in their plans. The play went viral, and there was enough crowd-funded excitement in this play to ruin the hedge fund investors’ plan to depress the stock price and snap up the profits.

It was one of those rare moments when the stars aligned and people on both sides of the aisle were cheering for the same people — the young Redditor investors — and against the Hedge Fund managers who got caught with their pants down losing big while getting beaten at their own game. (Reddit is a social media platform. Its users are dubbed ‘Redditors’.)

A key takeaway of what people objected to in the story is summed up in this tweet:

This wasn’t an example of honest trading based on value (Gamestop was actually in a pretty good position, cash-wise). This was an example of predatory betting on the failure of a viable company.

AOC and Ted Cruz were both condemning the hedge funds and cheering the retail investors. As were a lot of people across the political spectrum.

Jon Stewart and Rush Limbaugh were both on the same side of this issue.

Jon Stewart came to the defense of the young ‘Redditor’ investors, basically saying they just democratized the same rules the insiders have been exploiting for years. Then little Jimmy Kimmel felt the need to weigh in. 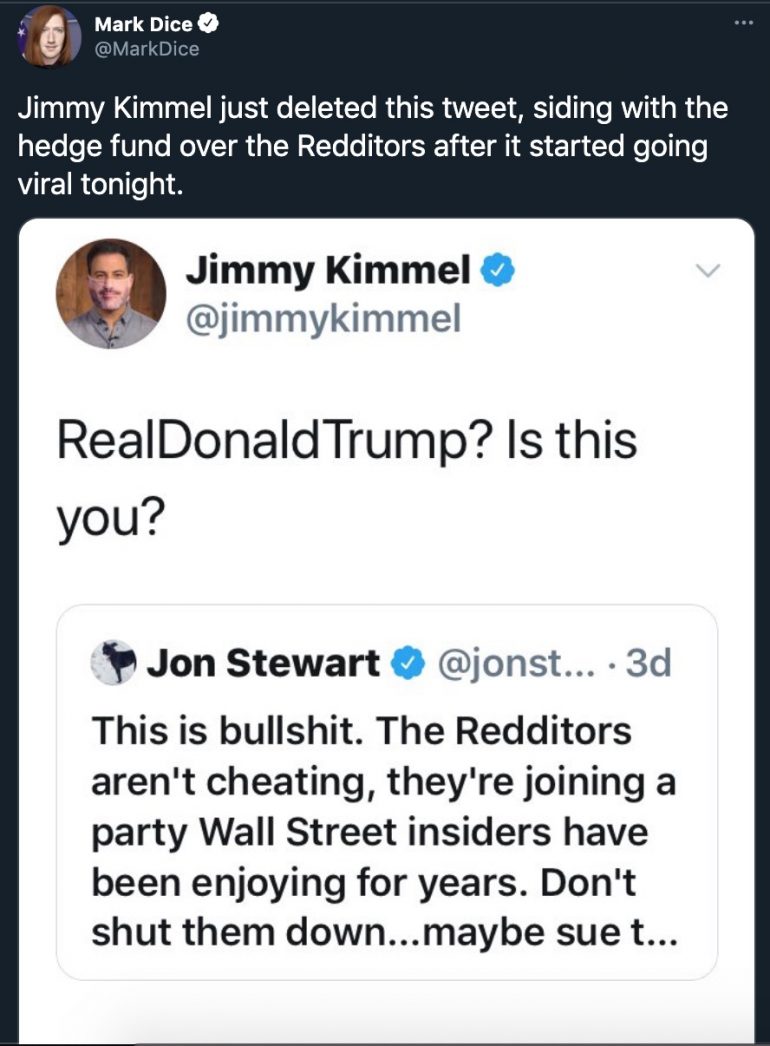 Kimmel got dragged for it badly enough that he deleted the tweet. He’s a comic, trying to drag a far more talented comic and he couldn’t at least be bothered to use a creative insult? That’s just weak. 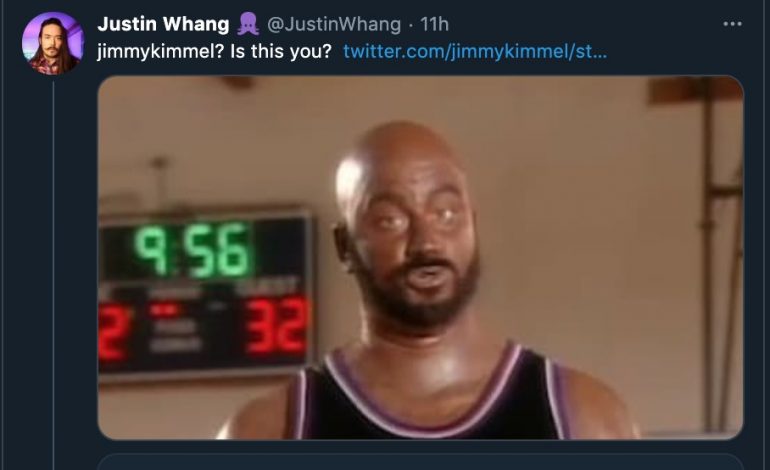 Also, why would he be the lone voice lashing out at the same Millenials who have been tuning in to watch his show when his only punchline has been ‘OrangeManBad’ for so long that we can’t remember why people used to tune into his show.

Maybe the losses hit HIM in the wallet. If so, then he’s been making his money off of predatory Wall Street Practices while pretending to be the great Woke defender of the little guy… awkward.

If Jimmy is such a twitter tough guy, at least he could be man enough to let an unpopular tweet stand. Instead, he yanked it to save face.

For a guy who once co-hosted something called ‘The Man Show’, that’s pretty gutless.