The left will declare this was a vindication of Biden’s election win, a repudiation of Republican objections, and have already denounced the dissenting opinions. That’s an overly simplistic understanding of what happened here.

Here is a sampling of the headlines masquerading as ‘news’ that followed Monday’s SCOTUS decision.

Here is Ted Lieu dunking on Thomas as a partisan… on the same day that he sets up his announcement about an upcoming hearing about the partisan packing of federal courts as a good and necessary thing. 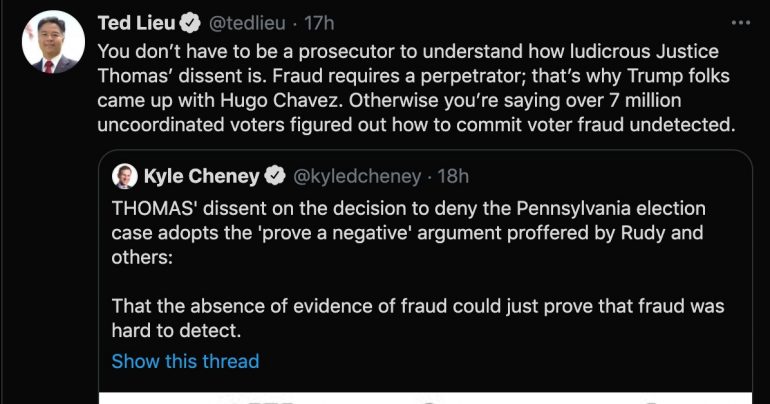 What else should we expect from a lockstep Dem talking point regurgitator who waited until a second body turned up at Ed Buck’s apartment before thinking it might be a good idea to redirect his donations to another cause.

None of this addresses what the real issue is here, something Thomas expressed with the words ‘our fellow citizens deserve better and expect more of us’.

Democrats will hold this vote up as a decision about the merits of Republican objections to certain conditions of the 2020 election. But they will be wrong to do so.

Three of the nine SCOTUS justices voted to hear the as-yet unheard cases concerning constitutional irregularities about 2020 election — Thomas, Alito, Gorsuch. One more vote would have been required to hear the relevant cases.

This was not a ruling about whether the election was or was not rightly decided, or the ballot process rightly, followed.

This was a decision on whether SCOTUS should finally get to hear the objections Republicans have been raising from the outset… some of them predating the election itself. This decision was a forgone conclusion by their decision NOT to rush the case and hear it while the question could still determine the outcome.

With Biden already sworn in, most issues of the question become ‘moot’ in the sense of being unable to enforce a remedy even if Trump’s supporters were proven to be correct.

So this decision doesn’t even have an opinion on whether the complainants from 2020 election have valid complaints. It decided not to hear the case at all.

As you can see from the headlines, that is not how this is being reported. Thomas is being blasted as being ‘biased’. But if you read his statement, (available in entirety here) that isn’t a fair description of his position.

“One wonders what the Court waits for. We failed to settle this dispute before the election, and thus provide clear rules. Now we again fail to provide clear rules for future elections. The decision to leave election law hidden beneath a shroud of doubt is baffling. By doing nothing, we invite further confusion and erosion of voter confidence. Our fellow citizens deserve better and expect more of us. I respectfully dissent,” Thomas wrote on Monday.

“That decision to rewrite the rules seems to have affected too few ballots to change the outcome of any federal election. But that may not be the case in the future,” Thomas wrote. “These cases provide us with an ideal opportunity to address just what authority nonlegislative officials have to set election rules, and to do so well before the next election cycle. The refusal to do so is inexplicable.” –WashingtonExaminer

Thomas understood that there were constitutional issues at play, that election laws written by the Constitutionally-granted authority of the State Legislatures have been changed after the fact by other entites who had no such constitutional authority, that there was a deliberate and concerted effort to bypass state legislation through the use of courts and decisions made by other government officials, and that this is likely to happen again in the future, potentially changing future elections whether or not the outcome of 2020 would have been any different had these changes not been made.

He makes no assumptions about what the result will be, only that there is an open question, and that this open question could cloud the results of future elections in controversy.

David Bernstein, a law professor, has a thread explaining this in straightforward terms: 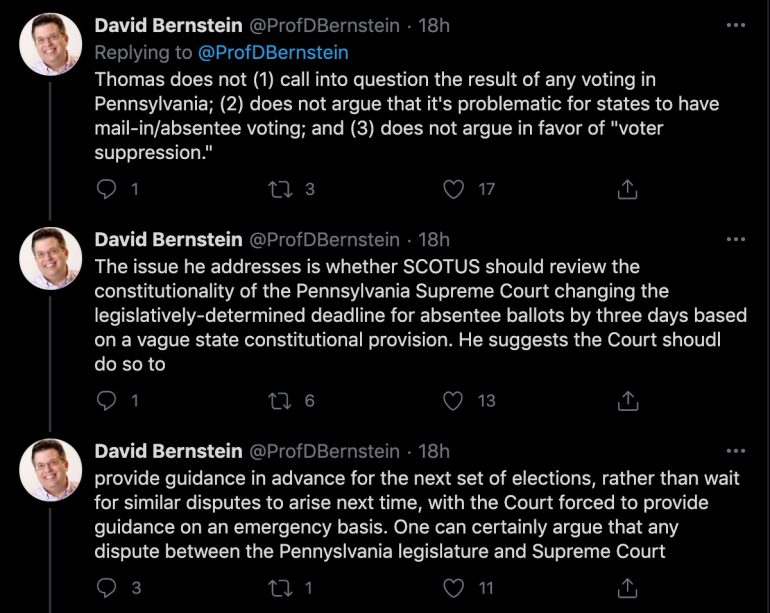 Having this question heard and resolved for future elections would benefit everybody in that there would be greater certainty in the rules we are all to play by. Judging by the specific electoral changes Democrats keep pushing for, clear rules of the game and a fair election seem to be the one thing they are most desperate to avoid.

It’s too bad the other judges weren’t thinking ahead to the impact of this decision on the next election because chances are — this won’t be the last we hear of this issue. But if past is precedent, they will twist themselves in knots looking for ways NOT to address the issue.