Is the honeymoon between moderate Dems, progressives, and the radical, democratic socialists in “The Squad” over?

It seems to be.

They’re going to try to push President Biden to the left, just as many on the right had predicted.

With the news that Joe Biden is now keeping unaccompanied migrant children in shipping containers and opening up detention facilities that were closed during the Trump administration, the opportunistic (and politically savvy) Congresswoman for New York’s 14th District is making hay while the sun shines.

Congresswoman Alexandria Ocasio-Cortez is using the left’s unfavorable view of the Department of Homeland Security as well as Immigration and Customs Enforcement in order to push for the complete abolition of border enforcement. The disdain for both DHS and ICE is largely due to the “kids in cages” narrative that was spread far and wide by Democrats and the media (but I repeat myself).

She’s not going to make her Democrat colleagues in purple districts too happy with this position, and she’s really going to anger them with her appeal that the United States should allow “climate refugees” into the country.

Alexandria Ocasio-Cortez wants to dissolve the Immigration and Customs Enforcement and Department of Homeland Security in a massive overhaul to the immigration system after it was revealed Joe Biden reopened facilities for housing unaccompanied minors arriving at the border.

‘It’s only 2 [months] into this admin & our fraught, unjust immigration system will not transform in that time,’ the New York progressive representative posted to Twitter Tuesday evening. ‘That’s why bold reimagination is so [important.]’

The far-left congresswoman is also pushing a proposal by fellow Democratic Representative Pramila Jayapal demanding the U.S. let in refugees fleeing an area due to climate change – known as ‘climate refugees’.

First, she’s definitely against “overflow migrant facilities” that she formerly referred to as “concentration camps.”

What the young Congresswoman fails to mention is that the situation with unaccompanied minors crossing the border illegally is rather complicated. Some are being used as an early ticket to the U.S., while others might be the victims of trafficking.

Perhaps a quick perusal of a 2018 ClashDaily article might help her understand the problems with housing children with adults.

She then goes on to explain the intricacies of the immigration system — except, she doesn’t at all. She just paints the entire immigration system with a broad brush, but really, she’s only concerned with the handling of illegal immigrants who have violated federal immigration law while other people entering the country are waiting and often paying thousands of dollars in legal fees to do so in accordance with the law. She makes no mention of legal immigrants — it’s as if they don’t exist to her. 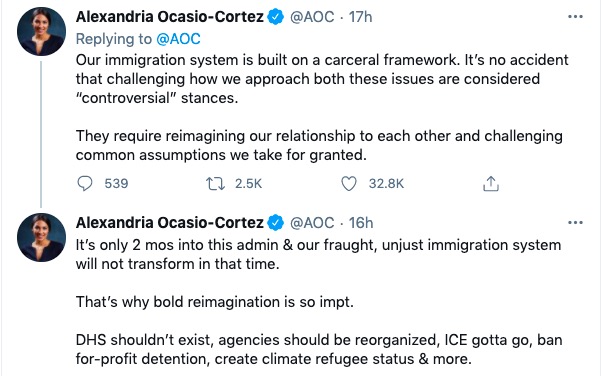 She continued in her Twitter appeal for open borders by endorsing the “Roadmap To Freedom Resolution” proposed by Squad Wanna-be, Rep. Pramila Jayapal (D-WA) which includes a pathway to citizenship for illegal border crossers. Again, no mention of the legal immigrants who are often waiting for years due to the backlog in the immigration system created by illegal immigrants and a bloated government bureaucracy. 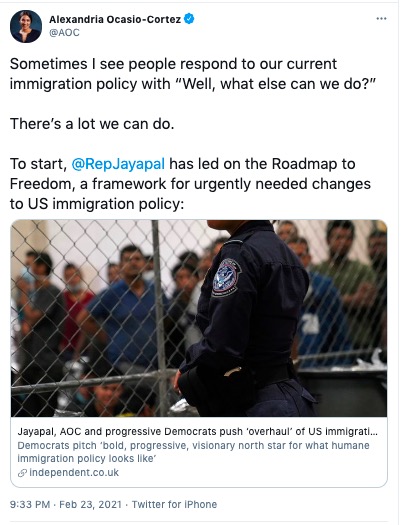 Isn’t it strange how these facilities were “concentration camps” under Trump, but they’re “influx facilities” under Biden? 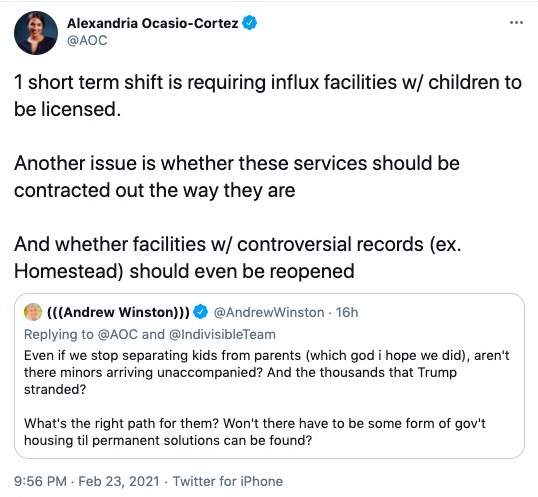 To a man with a hammer, everything looks like a nail. For open-borders leftists, the simple solution is to just abolish ICE and DHS and let anyone come in. Well, maybe not everyone, only the “right” people to come in from the “right” places. I’m pretty sure they’d not be so thrilled with conservative-minded Albertans who are oil riggers and pipefitters crossing the border because they oppose high taxation and the constant stifling of the oil and gas industry — the juggernaut of their economy — by the Trudeau government, for example.

But hey, you can’t say that because it’s allegedly racist against brown people or something. Even though I’m a “brown” person who has other “brown” family members who have been getting the run-around with their citizenship application for literally years now due to incompetence in the immigration system and the opportunism of immigration attorneys. The problem is, my family is apparently not the right sort of “brown” people and there’s no amnesty available despite decades of trying to do things legally. Democrats like Rep. AOC, however, only want to fix the one problem with immigration while ignoring the other problems because those issues don’t fit her narrative nor do they further her agenda. Typical.

You’ve gotta give the woman credit, she might not be so bright, but she’s got some pretty amazing political instincts.