Both travelers were flying into Canada from the United States and had taken a negative COVID test…but it was the wrong one. They were then hauled off in an unmarked van and their families have no idea where they are.

On Saturday, ClashDaily reported that Canadian Prime Minister Justin Trudeau announced some hefty new measures that were going to be implemented in the battle against the spread of COVID-19. Beginning on January 31, Canadian airlines have stopped all air travel to the Caribbean and Mexico until April 30 to discourage vacations to warmer climates during the winter.

Starting on February 3 at 11:59 pm, all air travel is going to be re-routed to just four airports in Canada — Montreal, Toronto, Calgary, and Vancouver — and travelers will be given a molecular (PCR) test for the coronavirus and then forced to quarantine at a “government-approved” hotel for 3 days at their own expense, which Trudeau estimated would be upwards of $2,000 per traveler. The high cost includes the rooms, food, the PCR test (what happened to all that universal healthcare y’all are so proud of up there?), private security, and the increased sanitary measures needed to keep hotel staff safe.

If a traveler, (who has already had to produce a negative COVID-19 PCR test before boarding the plane to Canada, by the way,) tests negative while in their $2,000 government-mandated, security-enforced hotel stay, tests negative, they are free to go home or to another place where they must continue to isolate for another 11 days. If they test positive, however, they are shunted off to a “federal isolation facility” at an undisclosed location.

You can read the ClashDaily report on the measures here:

It seems that the authorities at the Calgary airport didn’t get the memo that the hauling off of Canadians is to begin on Thursday.

Two Canadians have been taken away to undisclosed locations to quarantine at federal isolation facilities and their families have no idea where they are.

The wife of an Edmonton, Alberta Pastor had traveled to Dallas, Texas for work for a few days. She followed the government guidelines, but she apparently had been given the wrong COVID test in Texas and it wasn’t discovered until after she landed at her destination. She was confronted by security who refused to identify themselves and was taken in an unmarked, white van to an “undisclosed location” to isolate. Her husband doesn’t know where she is or when she will be let out.

Pastor Chris Martin posted the terrifying ordeal his wife, Nikki, went through on Facebook. He also posted an image of her negative COVID test. 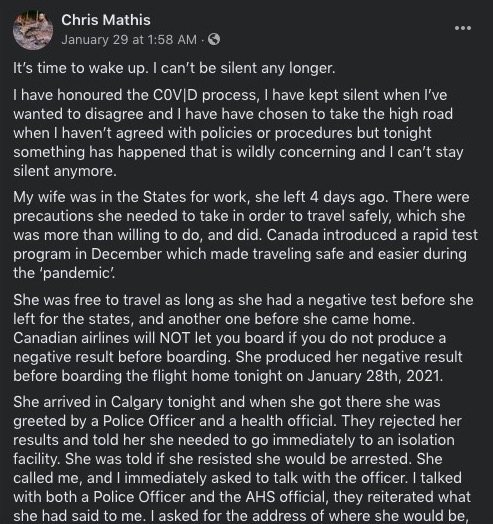 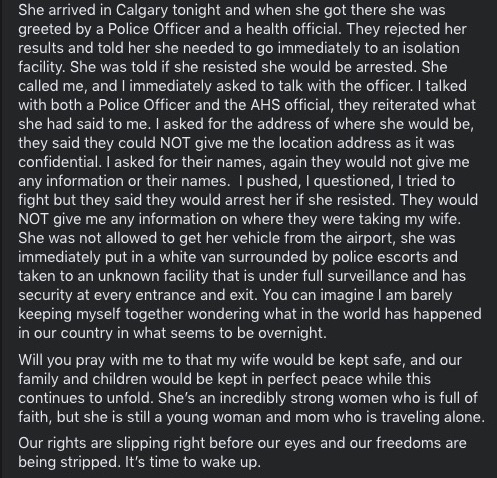 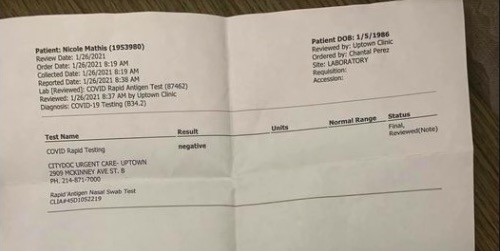 The second incident occurred late Saturday night when Rebekah McDonald, a mother from Red Deer, Alberta, went to the airport in Calgary to pick up her son, Ethan. They were trying to get him into Canada before the new restrictions took effect. The reunion wasn’t the one that the McDonalds expected, however.

Ethan also failed to obtain a molecular test for COVID-19, so he was shuttled off to a federal isolation center after disembarking the plane. Ethan and his family members were not permitted to see or speak to each other.

Rebekah McDonald chronicled her anguish and frustration in a couple of live-streamed videos. McDonald tearfully speaks about the lack of information and transparency from the Canadian officials that have detained her son. In a video following, she explains that she has to wait until business hours on Monday to try to get answers because these government officials take the weekends off.

Part two update from 2:30am pic.twitter.com/eP1M51Ioya

The province CANNOT merely say this is a federal issue. They MUST know what is going on within their province so deflecting responsibility isn’t going to work here. Enough with the blame game. We want answers and accountability NOW.

According to the Weekly Standard, the McDonalds haven’t seen Ethan in two years.

This is absolutely outrageous and a blatant assault on individual liberty. This doesn’t seem like something that could happen in Canada.

The Canadian Charter of Rights & Freedoms is basically the Canuck verson of the Bill of Rights, and these new mandates encroach on several of the rights of Canadians under the Charter. For example, the right to leave and return to Canada, the right to not be unlawfully detained, and the right to retain counsel once detained.

The Justice Center for Constitutional Freedoms has already said that it will file immediate court challenges to the forcible quarantine orders announced on January 29.

Jay Cameron, Litigation Director for the Justice Centre, said: “We are deeply concerned with the federal government’s increasing disregard of the constitutional rights of Canadians. Citizens are being arrested at the airport and transported to federal isolation sites without recourse to a lawyer or the review of the courts even though these travellers are in possession of a negative PCR test. Families are telling us that their loved ones are being held at these sites and that government agents are refusing to say where those sites are. These travellers are perfectly capable of isolating at home instead of being imprisoned by the federal government.”

Justice Centre President John Carpay said: “There is no rational reason to incarcerate Canadians simply because they exercised their constitutional right to leave the country as protected by section 6 of the Charter. It is not rational to impose a 14-day quarantine upon asymptomatic individuals who are able to provide negative test results confirming their lack of infection. Moreover, the federal government has admitted it is well-aware that international air travel results in a negligible number of active cases.”

“The federal government is on notice that if it does not immediately rescind these measures, and release the Canadians being held under illegal arrest in federal facilities, we will imminently commence legal proceedings.”
Source: Western Standard

It’s astounding how quickly governments in Western democracies have imposed measures that were used in more authoritarian regimes early on in the pandemic.

The question is…will the court challenges stop the governmental overreach or will it continue unabated, or will the government-enforced quarantines that violate the Charter continue until the virus is eradicated? Kinda reminds me of that joke you sometimes see on signs in offices, “The beatings will continue until morale improves.”

So much for the Nice Neighbors Up North, eh?