Kudos to the guy for packing so much stupid into such a small tweet. Buckle up kids, this one is gonna get a little rough.

Sean Penn will not be remembered in history for his keen philosophical mind, or his rapier wit. He’s that has-been actor who enjoys the company of cartel kingpins and Venezuelan dictators. His marriage to Madonna also drew its share of scandalous rumors.

Considering the tweet that brought him back into the public eye, his marriage to ‘Madonna’ is particularly ironic.

It’s a classic case of ‘better to remain silent and be thought a fool, than to open your mouth [or twitter app] and remove all doubt.’

Here’s the tweet we’ll be referencing throughout the article. 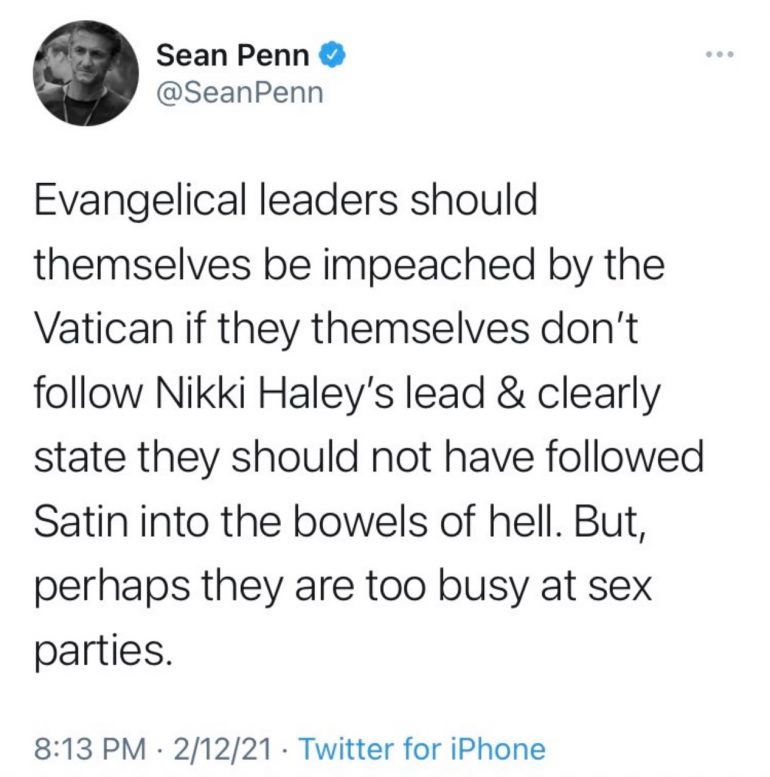 Was Sean sober when he wrote this?

There is SO much going on in this tweet it’s hard to pick an entry point.

For one thing, maybe ‘sex parties’ isn’t a stone this guy should be throwing. After all, a Newsweek piece wrote of him, in a list of ‘Directors who have profited from Weinstein’, “Penn, who has been accused of abuse himself, has not commented on Weinstein’s allegations.”  (Oops. He didn’t think we were going to let him off the hook for that, did he?)

If you missed the whole ‘Nikki Haley’ thing, here’s the context.

“We need to acknowledge he let us down,” Haley, whose ambassadorship was served under the Trump administration, told Politico, after saying that she believes Trump will never run for reelection as he faces further isolation, a “suffering” business and a social media ban.

So, she’s thrown Trump under the bus. Like every other ‘Useful’ Republican, that’s a sure way to earn ‘strange new respect’ from the activist left. Such Republicans become useful because they become a ‘bipartisan’ denunciation of Republicans. Notice how voices like Tusli Gabbard are not afforded the same respect for being an objective critic of their own party.

So Sean Penn is holding up Nikki’s denunciation of Trump as the righteous path all other Republicans should follow, even though Democrats are on record with the intent of discrediting as ‘illegitimate’ the Trump presidency from the time he was still President-Elect. But this time, you see, it’s serious.

If he doesn’t know the difference between ‘Satan’ and ‘Satin’, let’s just say you don’t want him buying the sheets for your wedding registry.

Now we’re getting to the weird part.  This is what happens when your entire worldview revolves around politics. The lines between government and everything else get blurred. No wonder Sean is so sympathetic to secular socialist governments in which the state also fills the role of religious devotion. In his heart of hearts, he’s a good little soviet.

For one thing, ‘impeachment’ has an actual meaning. It is a tool used explicitly by elected governments (not religious organizations) as a check against certain behaviors of other public servants.

For another, while Catholics and Evangelicals have a lot in common, it takes a profound ignorance of history to not realize that Catholic and Protestant branches of Christianity are entirely separate and distinct.

Hey Sean, have you heard of the Reformation…? The Ninety-Five Theses… Martin Luther?

It was kind of a big deal.

Let’s put this in terms even Sean could understand. As his former mother-in-law, Madonna’s mom (if she’s still around) has a stronger claim to authority over Sean and his life than the Vatican has EVER had over Evangelical churches.

Next time you want to impress us all by weighing in on life’s big questions, Sean… don’t.

Could somebody please put this book in his hands before he embarrasses himself even further?