Predictably, Joe Biden used the anniversary of the COVID pandemic declaration as an opportunity to make a presidential address that was nothing more than a thinly-veiled attempt at credit-grabbing and blame-shifting.

For a guy who worked so hard to claim that the massive boom-times of Trump’s first 3 years were nothing more than the legacy of the Obama/Biden years, Joe could stand to be more appreciative of the role Trump’s administration played in handling the pandemic.

But that would be taking the high road, and painting his hated enemy as human. If you think a guy who’s literally borrowing a page out of Goebbels in trying to destroy Trump, after running on the discredited Charlotteville ‘Very Fine People’ hoax, would be looking for UNITY or taking the high road, We’ve got a bridge to sell you.

He painted everything done by the previous administration as an abject failure whose mistakes should be held directly responsible for the deaths of half a million people, but he himself, Joe Biden, rode in on his white horse to save the day.

He was making announcements like the success of Johnson and Johnson partnering with Merk — we’ve already looked at why it’s a lot harder for him to claim credit on that than he thinks.

Here’s the problem with that brag: 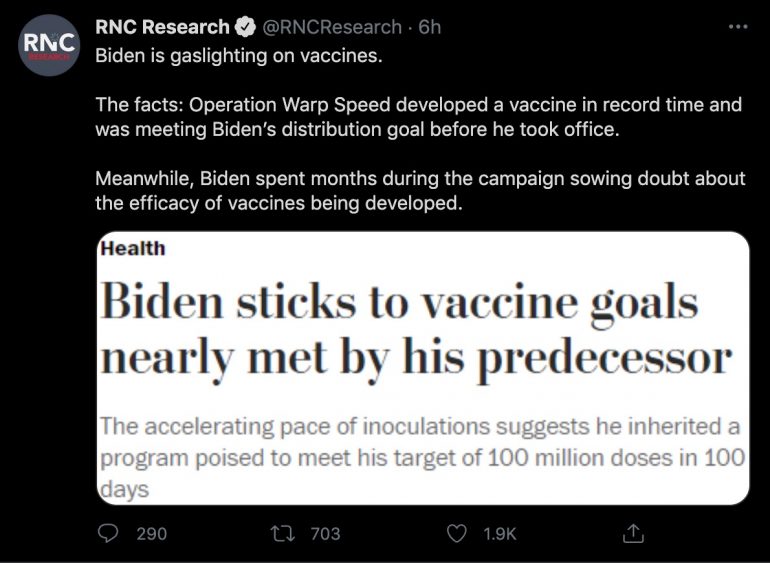 There was a boast about just how widely available those vaccines are going to be — did you know that as soon as May first, all adults 18 and older will be eligible to receive the vaccine? He thinks that we might — just might, maybe — start taking baby steps back to normalcy around oh, Independence Day.

Joe’s plan has vaccines START hitting adult arms in the beginning of May. What results did Project Warp Speed — you know, the plan that even some of Biden’s own advisors had to reluctantly acknowledge had set a great foundation — project?

Before he reversed his opinion (again) to come into better alignment with the official Democrat talking points, Fauci said:

“We certainly are not starting from scratch because there is activity going on in the distribution,” he said then, in response to a CNN report the previous day quoting unnamed White House officials who said Trump left no plan for nationwide vaccine distribution. —BPR

Of course, if Joe Biden REALLY believed the Trump administrtion had dropped the ball as badly as he claims, he’d have no choice but to fire the most expensive failure on the American payroll — Fauci himself.

How could someoene so central to such a failed COVID response be permitted to remain in his a trusted role of oversight? Especially with all the flip-flops he’s been accused of in the last year and a bit?

If they were all being honest about the situation? They’d have something very different to say.