Biden’s dogs got a little too carried away with Joe’s version of the spirit of unity. They were forced to leave the White House for reasons of safety. . . they had become a danger to White House Staff.

CNN reported that the dogs were shipped home last week after what the network described as one of “two sources with knowledge” described a “biting incident.”

The exact condition of the victim is unknown.

According to CNN, even before the bite, Major “has been known to display agitated behavior on multiple occasions, including jumping, barking, and ‘charging’ at staff and security.”

The Biden family adopted Major in November 2018 from a Delaware animal shelter.

At about 13, old for a dog, Champ has considerably slowed down and is less ornery than Major, but is also being sent to Wilmington. — WashingtonTimes

For anyone keeping score at home, this is actually yet another Backfired Biden promise and yet another example of a fawning press with egg on its face.

Flashback to November, this is but one of many puff pieces representative of a slavish media slobbering over all things Joe Biden.

This is from the Washingtonian. Even the headline and subhead were a swing and a miss…

In the body copy, we got this poke at Trump dressed up as praise of Biden:

After four years without a White House pet, the pending arrival of canine residents feels like yet another return to normalcy. In fact, Donald Trump is one of the rare presidents to not have a four-legged, feathered, or furry friend while in office, joined only by James K. Polk. Trump’s lack of pets was even rolled into a Biden campaign message: 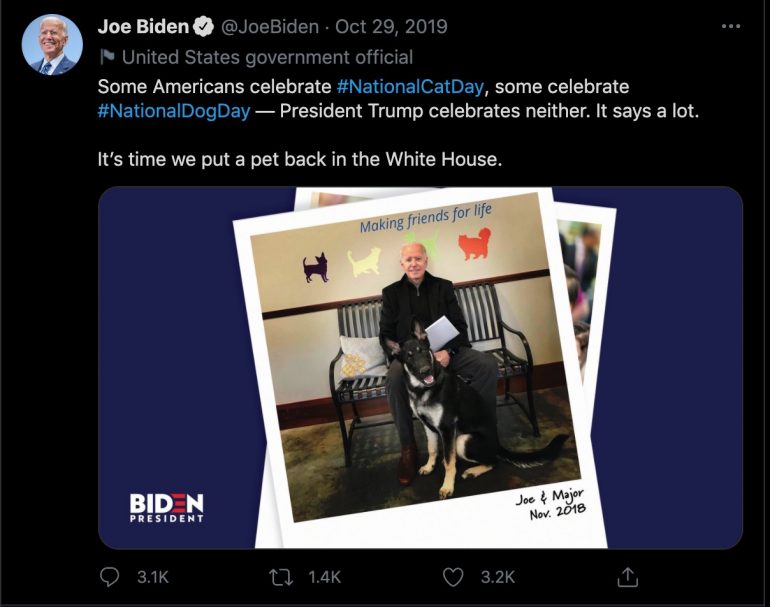 Great job, Joe. That held up almost as well as that claim in the debate that you were NOT anti-fracking!

We are often assured that no dog is ever born with violent tendencies — they are learned. What could possibly have predisposed this dog to violence?

Honestly, one point stands out in this story more than the others, and it may not be the one you think.

“Champ has considerably slowed down and has been sent to Wilmington…’

With Kamala already taking calls with foreign leaders, Dr. FLOTUS running your PR on the border, and staffers quickly cutting the feed before you can make good on your offer to take questions. . . we’re wondering if ‘being sent to Wilmington’ might actually be foreshadowing for their owner to take a similar quiet exit.

After all, he couldn’t even remember what the Pentagon was called for pity’s sake.