Have you heard the one about leftists holding the line while the political right gets more and more extreme? Do you know it’s bogus but can’t quite articulate why? We’ve got you covered.

If you’ve got leftist relatives or coworkers who are absolutely convinced that the Right is becoming more extreme every day while Democrats like Joe Biden are solidly in the ‘moderate’ category, these two debunkers have the receipts for exactly why that idea is a steaming pile of cow flop, no matter HOW many CNN talking heads devoutly believe it.

If you aren’t familiar with Freedom Toons (give their channel a follow if you enjoy their work) their methods are pretty easy to explain if you are familiar with either Mystery Science Theatre 3000 or Beavis and Butthead, when a video would be playing, while those watching it would give commentary as it plays through. 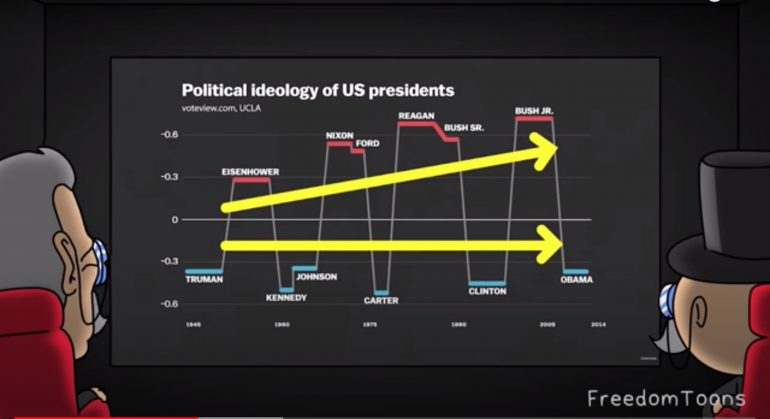 But rather than relying on (just) the sarcastic quips in the other two, this is cartoonified with fun voices and spiffy personas. . . and some actual useful facts making fun of outrageous liberal claims.

Humor and ridicule is a vastly underrated tool of persuasion that our side would do well to get better at using.

Even Jesus used it sometimes. (Hint: stop and think about the absurdity of someone straining out a gnat and swallowing a camel for a moment. Both were unclean, and the two words in Aramaic sounded very similar. He was using ridicule to shock people into rethinking their assumptions.)

As for the guy whose ideas they are exploding?

That self-admitted soyboy may be too far gone. But if you know anyone trending in that direction, you might want to put a copy of this in his hands, before it’s too late.