Had any of this been happening during a Republican government, the coverage would wall to wall, and the coverup would BE the story. Evidence of guilt, and all of that.

But when there’s a (D) after the name of the guy in office, our Praetorian Press plays by a different set of rules. With their complicit help that comes from trading favors with Big Tech, they throw up a wall of defense around them from all criticism that might make the Secret Service itself marvel at how thoroughly protected he was.

Ted Cruz led a contingent of Senators to see for themselves just how jacked up the situation is, and whether the conditions there match how the AP would officially define a ‘crisis’. (Spoiler alert, it does.)

How far is Joe Biden going to stop the American people from seeing inside the Donna CBP facility?

Biden sent a political operative from DC to block our cameras and even threatened another senator to obstruct legitimate congressional oversight. pic.twitter.com/vHT2U7Nh1z

Ted Cruz, after his border visit, spoke on Sunday Morning Futures about what’s really going on.

In this clip he talked about what’s gone wrong…

Joe Biden’s transition team was warned that if they ended the Remain in Mexico policy, there would be a massive influx of illegal aliens.

In this one, he explains just how inhumane the supposedly nicer Democrat approach really is, in fact, inhumane, and is in fact being widely exploited by people with ill intent.

Democrats like to pretend their open-borders policies are somehow humane.

There’s nothing humane about what Joe Biden and Kamala Harris are doing at the border. This is a humanitarian, health, and national security crisis. pic.twitter.com/MdtsUUugL0

More images of what we’re not supposed to see.

<blockquote class=”twitter-tweet”><p lang=”en” dir=”ltr”>These are the pictures the Biden administration doesn’t want the American people to see. This is why they won’t allow the press. <br><br>This is the CBP facility in Donna, Texas. <br><br>This is a humanitarian and a public health crisis. <a href=”https://t.co/UlibmvAeGN”>pic.twitter.com/UlibmvAeGN</a></p>&mdash; Ted Cruz (@tedcruz) <a href=”https://twitter.com/tedcruz/status/1375523168044134406?ref_src=twsrc%5Etfw”>March 26, 2021</a></blockquote> <script async src=”https://platform.twitter.com/widgets.js” charset=”utf-8″></script>

He penned a letter to Biden registering his outrage that Senators and the media are BOTH being hampered from exercising their respective roles in seeing what is actually happening there and holding his administration to account. The whole letter is included, but we will bring special attention to the people being ‘housed’ under a bridge (with small children) for want of any better shelter.

Here is his entire letter: 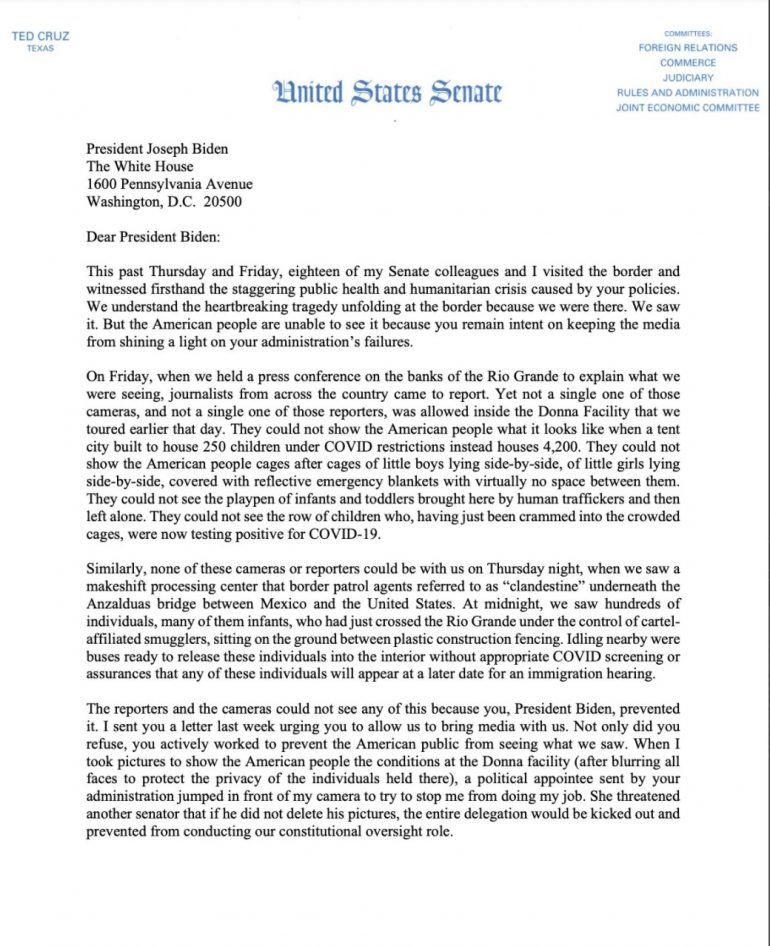 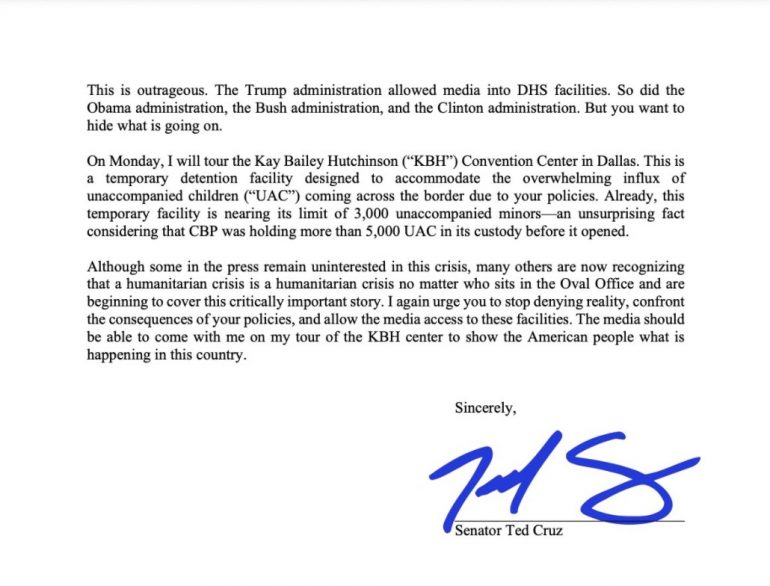