David French has, for some reason, been considered one of those ‘prominent conservative voices’ for quite some time. But he’s never quite recovered from the rise of Donald J Trump.

David French was one of those ‘stalwarts’ who held tight to their ‘principles’ in denouncing Trump from the beginning.

The ‘why’ (rooted in Christian faith, ironically) hardly matters at this point. What does matter is that he held that position right through the Presidency, and never got around to revisiting it — even after the actual POLICIES Trump put forward were more conservative and friendly to faith, liberty and pro-life positions than, well, anybody he could have suggested as a preferable candidate.

He’s all over the map when it comes to consistency in policy.

Big Tech censoring conservative voices is a good thing falling perfectly within the natural rights of a business. But let Amazon pull the plug on the book of a friend of his and suddenly he’s screaming about censorship. Why isn’t he telling his buddy to ‘build his own Amazon’?

Now he’s got opinions about Texas cutting restrictions against mask use. Forget the data showing that the government getting out of the way and letting Florida open for business again has not resulted in the sky falling. It is even based on the SAME free-market logic French used to defend Big Tech.

But he’s clutching his pearls anyway.

Agreeing with Bill Kristol about pretty much anything should have been his first clue that he was a bubble off level.

Bill is right. Anti-masking further exposed the darkness in parts of the right. It’s such a small thing to show love of neighbor, but that small thing was and is too much for all too many who claim to be pro-life. https://t.co/uv78PRfSId

The single best slap down I’ve encountered in response is probably this one: 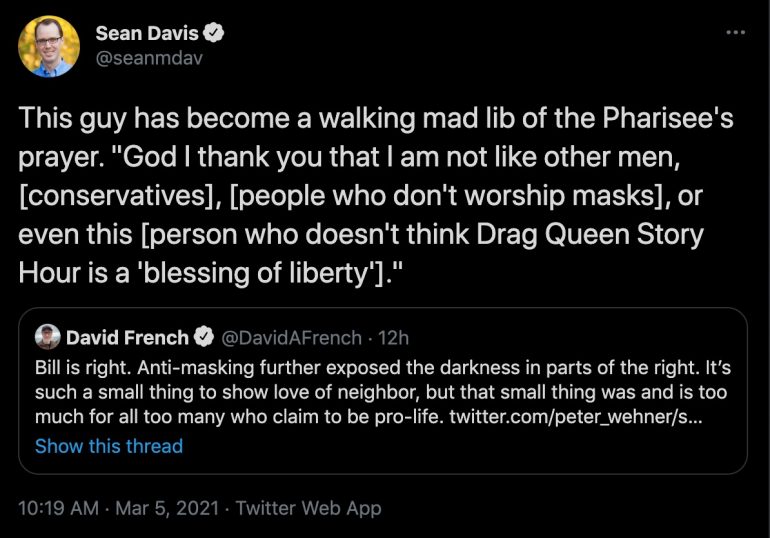 Why can’t you just wear the mask?

We oppose the government having the right to use force against us if we fail to comply with dubious demands. None of these mask laws ever went through the legislative process. People we elected never put them into law… so there was no reason there should EVER have been a mandate to wear them.

Who does it hurt?

These mandates hurt everyone, ultimately.

Not just in the price we are paying in the pandemic shutdown, lost business, bankruptcies, disruption, people dying alone without loved ones able to stand with them, loss of a school year etc, etc, etc.

Any time we condition the government to use powers beyond what they were constitutionally granted, and the public obeys those same powers for … ‘reasons’… we have set a precedent that has served as training wheels both for the public and their leaders in the normalizing of authoritarian practices.

But you can’t criticize David French. He is sincere and he cares about saving lives.

He does not, and I can prove it.

He, and a great many of the other COVID pretenders who demand that the government hold the threat of punishment against unbelievers who refuse to wear the mask upon command, has a problem.

The lie behind his bogus compassion is literally written all over his face. 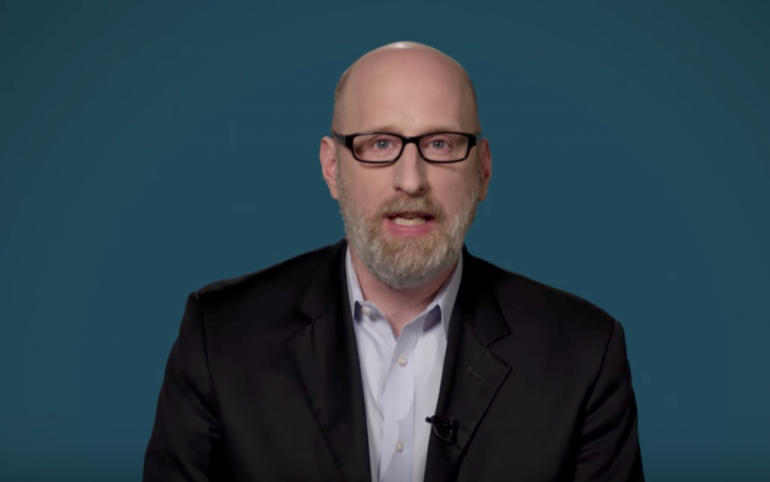 Do you see it?

The man wears a beard.

Any mask he wears CANNOT, by definition, get a good seal.

Which means he doesn’t care about the mask efficacy enough to shave it off.

Which means every criticism he has made against anyone for prioritizing THEIR freedoms above the government mandate is ALSO true of him.

Every quip about being ‘selfish’. Every snipe about a mask-denier’s pro-life positions being self-refuting…

To quote an elegant quip from the late philosophy prof Ronald Nash, his position is “self-referentially absurd”.

And like any other self-defeating argument, it will be promptly ignored as the BullS**t it is.

You’d hope someone who has as much to say about Jesus as French does would have had some of Jesus’ intestinal fortitude rub off on him.

Watch: Colorado Police Officers Save 3-Year-Old After She Gets Stuck in Bars
September 24th, 2021 Flag And Cross