Biden may be taking all of Mexico’s population. But that’s ok, he’s giving them something in return… manufacturing jobs.

He made Obama eat his own words by doing something Obama said could never be done. . . he brought manufacturing jobs back. 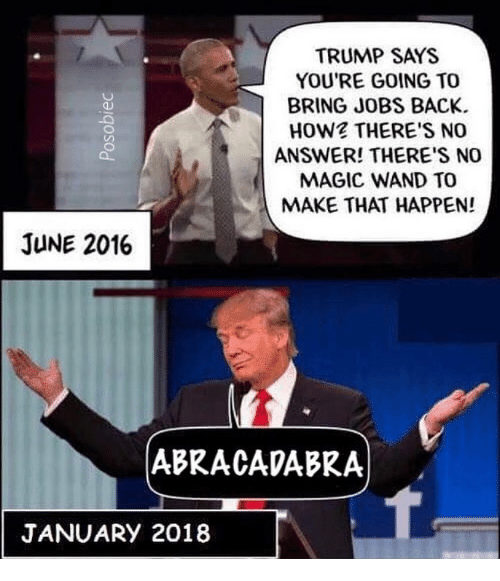 Repatriating our manufacturing when we had been bleeding jobs for decades is kind of a big effing deal, right? It was YUGE!

And what was Biden telling us he would do?

Biden is also promising to sign executive orders, if he wins the presidency, in his first week in office next January to ensure the purchase of American goods in the federal government procurement process.

Biden’s campaign said he also plans to create a tax credit for companies that invest in the U.S., such as by reopening closed manufacturing plants or returning production from overseas.

Polls show Biden narrowly ahead of Trump in Michigan, the hub of U.S. auto manufacturing. –VOA

He’s also cranking up corporate tax and the taxes on ‘the rich’, a term which is almost guaranteed to keep growing through his administration.

The United Auto Workers Union informed workers this week that Ford Motor intends to move a major project, worth $900 million, out of Ohio, to its plant in Mexico.

In a letter to members on Friday, UAW Vice President Gerald Kariem said the company told the union that it was relocating the manufacturing of a next-generation vehicle to a plant in Mexico. The UAW said the union was not given a clear explanation and that, in making this move, Ford was not living up to the commitment made the[sic] the factory in its last contract talks.

…According the the UAW, as part of a four-year contract agreement, Ford committed $900 million for a plant in Avon Lake, Ohio, including the next generation product that was to be added in 2023.

Although Ford has not yet directly addressed the issue the company did say in a letter to employees earlier in the week that conditions had changed since 2019. Meanwhile, Ford told Reuters that it has invested more than $185 million since 2019 at its Ohio Assembly Plant. –TrishIntel

If you were convinced that Trump is a clown, and tried to pin credit for his successes on Obama, surely you can solve this problem, right?

After all, you’re the tough guy aren’t you? What could Trump possibly know about leadership and the economy that you don’t?

If you can’t bring the jobs back, you will have to look even MORE union members in the eye and explain why it is that you screwed THEM over like you did the union folks from the Keystone pipeline.

After Seeing Kids Playing Basketball with Milk Crate, Officers Go Above and Beyond to Get Them Real Hoop
June 23rd, 2021 Flag And Cross