The fake “find the fraud” quote was parroted by major media outlets, many of whom said that the quote had been “independently verified.”

How do you verify a quote that is fake? You’d have to be a corporate media journalist to know the answer to that mystery.

The Washington Post has issued a correction on a major story that was driving the news cycle for weeks earlier this year. In an article covering the phone call that President Trump made to a Georgia elections investigator in December, the Washington Post said that Trump had urged her to “find the fraud” and that she would be a “national hero” if she did.

Here is the link to the original WaPo article:

It now has a lengthy correction at the top: 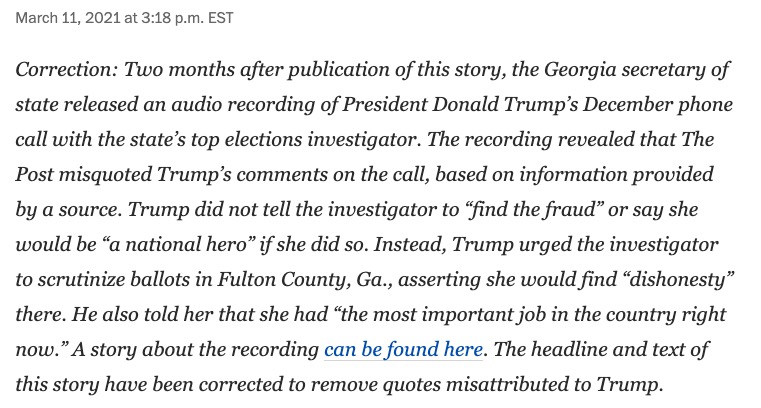 Correction: Two months after publication of this story, the Georgia secretary of state released an audio recording of President Donald Trump’s December phone call with the state’s top elections investigator. The recording revealed that The Post misquoted Trump’s comments on the call, based on information provided by a source. Trump did not tell the investigator to “find the fraud” or say she would be “a national hero” if she did so. Instead, Trump urged the investigator to scrutinize ballots in Fulton County, Ga., asserting she would find “dishonesty” there. He also told her that she had “the most important job in the country right now.” A story about the recording can be found here. The headline and text of this story have been corrected to remove quotes misattributed to Trump.

The Wall Street Journal posted audio of the call which wasn’t believed to have been recorded at the time. That seems to have been what prompted the Washington Post to issue the correction. You can listen to the audio here.

It’s very, very bad when a media organization becomes the story. But WaPo totally deserves whatever they get for this.

Our colleague, Jeff Dunetz, published an article on January 4, 2021, with the full audio of another phone call that President Trump made to Georgia Attorney General Brad Raffensperger which was published with permission here on ClashDaily:

In that article, Dunetz explains how WaPo selectively edited the news release and framed the story in a way that was harmful to Trump. The Raffensperger call shows that Trump simply wanted an honest count of the ballots, which he believed would give him the votes he needed to win the state.

It’s bad enough that the Washington Post — whose masthead states “Democracy Dies in Darkness” — engaged in clear media malfeasance by relying on an unnamed “source” who clearly lied, but the rest of the media picked it up and spread it everywhere.

That is the real story here.

Here is how much of the media characterized the original reporting by WaPo:

Now that the audio has been released, these reports just don’t age well.

NEW: According to new reports, President Trump placed a second call to a Georgia official in December, urging the state’s lead elections investigator to “find the fraud” in the presidential election results, @JulesJester reports. pic.twitter.com/LJYP2rMv1T

The “find the fraud” quote was tweeted out by multiple news outlets. 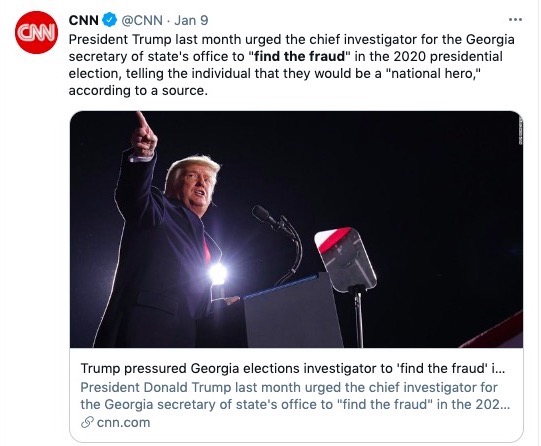 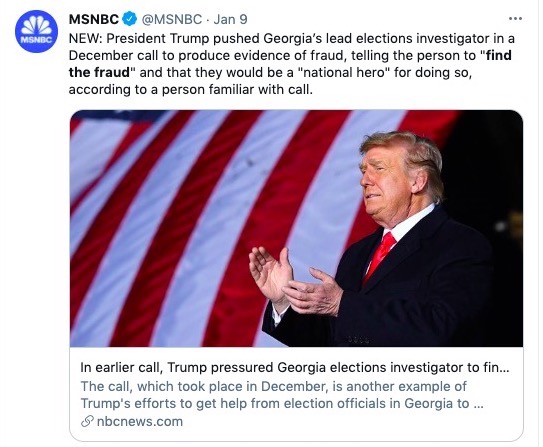 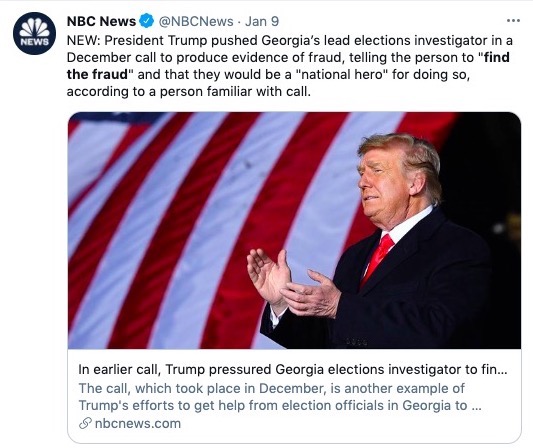 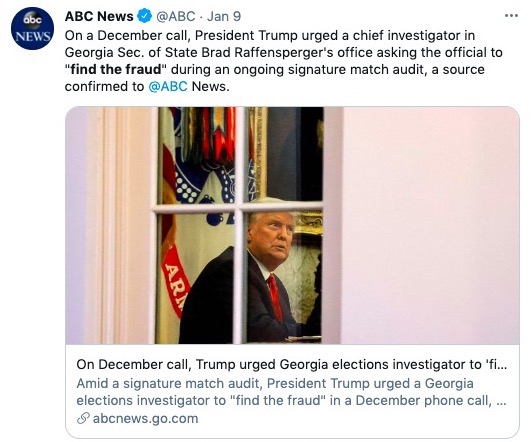 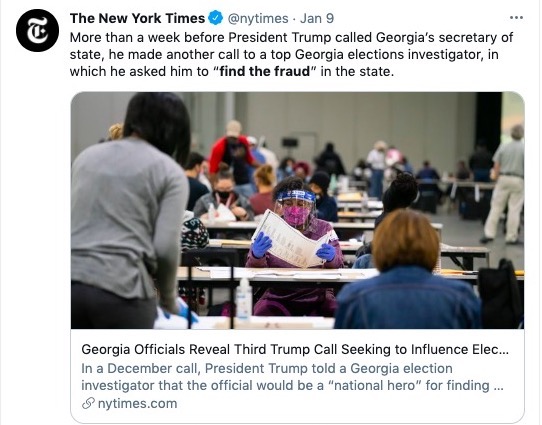 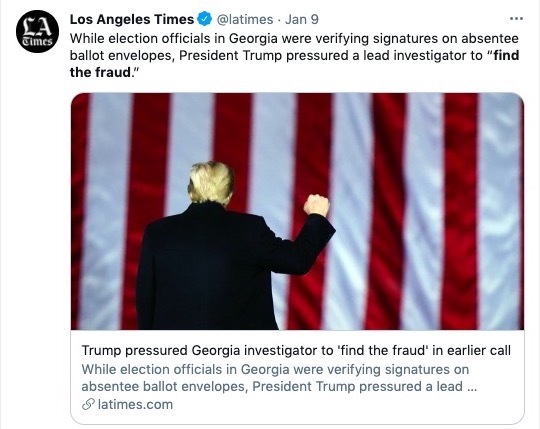 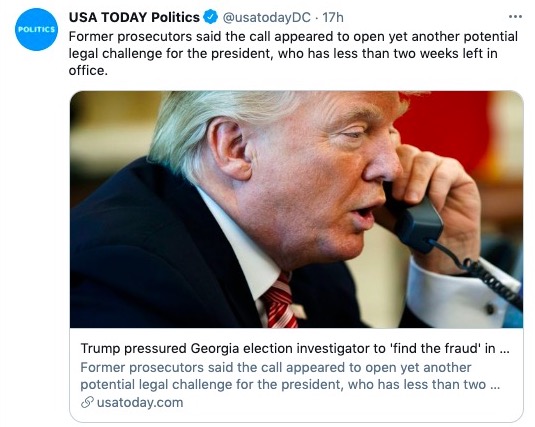 What is outrageous is that many of these outlets claimed that they had “independently verified” the quote. CNN, NBC News, ABC News, USA Today, and PBS NewsHour all said that they had confirmed the accuracy of the quote.

ABC News reported “an individual familiar with the matter confirmed” Trump urged the chief investigator to “find the fraud,” telling this person they would be a “national hero” for it.

It was a complete lie.

And this lie had consequences.

The “find the fraud” quote was cited in the second Articles of Impeachment against President Trump in January 2021.

The question is, did they actually all use the same lying source to confirm the misquote, or did they just say that they confirmed the quote? Both look bad for the corporate media — either they were easily duped or they are corrupt and work in collusion with one another. Is this what we get? Confirmation bias as the driving force in media?

This sort of media malfeasance is nothing new. Any anonymous source saying anything negative about Trump will do.

The Atlantic did the same damned thing when they said that Trump called fallen soldiers “suckers and losers” last fall.

WATCH: Trump Is FURIOUS With Article In The Atlantic Saying He Called Fallen Soldiers ‘Losers’ And ‘Suckers’ Citing Unnamed Sources

Then there was that whole promotion of an anonymous “Resistance” essay published in the New York Times from an “official” in the Trump administration. The D.C. media was frantically questioning high-ranking Republicans to sniff out the author — from Vice President Mike Pence and Secretary of State Mike Pompeo to U.N. Ambassador Nikki Haley. It turns out that it was just a low-level staffer, Miles Taylor, who eventually became a contributor on CNN and worked to elect Joe Biden.

While members of the media lament that they are being called “enemies of the people” as they continue to exhibit overt bias and peddle false claims that conveniently fit their narrative but don’t seem to get flagged by so-called “fact-checkers”, there is a push to eliminate right-wing media. The left-wing corporate media doesn’t just want a monopoly, they want to punish anyone who opposes them. And they’re not alone. They get help from their Big Tech buddies in suppressing stories they don’t like. Just look at what happened with the way Twitter and Facebook handled the New York Post story about Hunter Biden’s laptop.

Even now, we have a press that is ignoring the real scandal involving the New York Governor sending COVID-positive patients into nursing homes along with a supply of body bags, and fixating on claims of sexual harassment, which, although serious, don’t amount to 15,000 dead seniors that his administration cooked the books to hide.

Our corporate media is broken, and worse than that, it’s in denial that it’s broken.

That’s why they get triggered when Trump calls them “fake news” and the “enemy of the people.”

The minute it’s confirmed that doddering, old Joe Biden who slurs his words, can’t remember the names of his appointees, and won’t meet with the press or give a State of the Union address has been elected, well, it’s all sunshine and lollipops again.

We’ve seen how they’ve acted for four years and it’s pretty clear that Trump is right.