If you haven’t noticed yet, the list of names feeling the weight of the cultural ax is suspiciously selective.

The shorthand may be ‘cancel culture’, but a more accurate description is the enforcement of woke orthodoxy and punishment of ‘heresy’.

Readers of Orwell would both recognize and understand the dynamics of why some books are doomed for destruction while far worse offenders remain untouched. Why was Dr. Seuss stricken from places like Amazon? (Even Thomas Sowell is now under review!).

For unclear reasons, Amazon/Kindle have taken down the eBook of Thomas Sowell’s textbook Vision of the Anointed out of digital circulation. As of the time of of writing, the Kindle copy is listed with the title “Item Under Review” and isn’t available for purchase as a digital copy.
CulturalRevue

… Meanwhile, much more obviously ‘problematic’ pieces are still availale. Birth Of A Nation is still available, as are Hitler’s Mein Kampf, Communist Manifesto and even Mao’s Little Red Book.

Imagine if we cared about actual wrongdoing and cultural harm of corrosive ideas as much as we cared about a cartoon skunk? So why is this cartoon skunk being sent to the chopping block, while books authored by people who led the world into the wholesale slavery and slaughter of millions are still selling?

Because this process has nothing to do with removing bad things from the world. It’s about creating conformity to a new value system.

They tell us that Pepe Le Pew has got to go because his behavior is intolerable. That character is being held up as a transgressive example of ‘rape culture’ who is unfit for society. 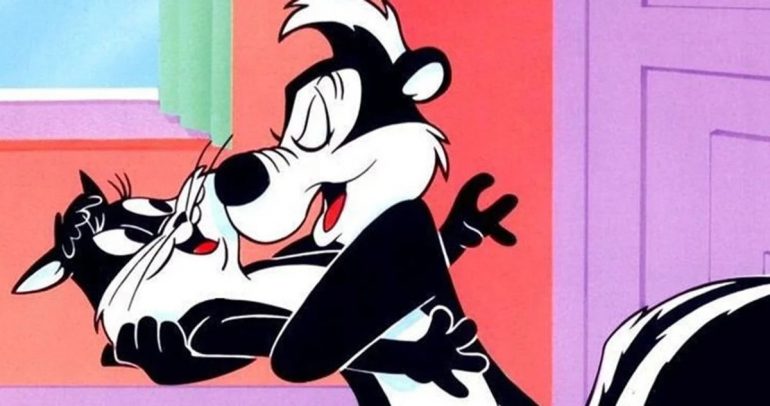 Is that how they REALLY feel?

Tell that to Roman Polanski. He’s STILL hailed as a hero to Hollywood, despite being convicted of raping a thirteen-year-old girl.

If the ‘woke’ genuinely cared about this issue, we wouldn’t waste energy on jettisoning a French cartoon skunk who won’t take no for an answer (Pepe would seem like an innocent babe-in-arms compared to some of the dogs in modern pick-up culture), we would turn our attention to celebrities who have abused their power and wealth to coerce people into doing things they wouldn’t otherwise do.

You know, the sort of sexual abuses that left the once-celebrated Lincoln Project in tatters.

The list of real-life candidates is a long one. Billionaire Democrat rainmaker Ed Buck literally got away with murder until the bodies started piling up, Epstein and Weinstein are almost too obvious examples. We are well familiar with other names like Anthony Weiner, Eliot Spicer, and a conga line of other disgraced public figures.

Curiously, once Hillary no longer had a path to the White House, Bill Clinton’s accusers were finally believed. This cam YEARS too late, but had no consequences. Slick Willy is still welcome in polite society.

As for the Tara Reade debacle?

Even the current Vice President believed that the President under whom she now serves was credibly accused of digitally raping his staffer, but that story was swept under the rug by a complicit media.

But the skunk is a problem?

Yes. And from their perspective, it makes sense.

If this writer’s assessment of the left’sreal end-game is correct, we can expect complaints to start pouring in, sweeping away a whole litany of shared American cultural touchpoints that had once brought us all together.

The reason is as simple as it is diabolical.

Before history can be rewritten, it must first be erased.

This is not the first time cultural Marxists have tried to hijack a nation and culture. They have years of practice in fomenting cultural revolutions.

The corrupting of patriotism and of the confidence in American history has been under siege for generations, and it is only accelerating with the rise of the 1619 Project and the introduction of new ‘norms’ which come with the accusation that old norms were evil. Anyone who doesn’t share those values is to be denigrated and sneered at.

Even Lincoln has had his name stripped from schools for not being sufficiently aligned with the new ideology. And this process will continue.

They’ve already taken aim at the national anthem and the flag. Expect them to take a slow march through all of our great books, our literature, or favorite songs, films, shows and cultural touchpoints.

Anything that serves as a unifying rallying point or that makes us forget our differences will be targeted. Even mom and apple pie will eventually be targeted by groups who have openly opposed the traditional nuclear family.

I’m ready to put down a marker saying that before our next Presidential election, some of our more beloved Superheroes — Superman, for instance — will somehow be singled out for harsh criticism.

If they can sever our roots and erase our history, they will have accomplished a genuine revolution. They will have created an empty vessel into which they can pour . . . whichever poison they would offer us to drink.

With our history gone, what benchmark shall we measure it against, that we might even know we are being poisoned?

Do you still really think this is about a cartoon skunk?

For the rest of us, we’ve got work to do.

Grab yourself some inspiration and ready yourself for the fight ahead.