What were those Grammies people really expecting? If you called in an abrasive comic as a presenter, expect some people to get offended. Deal with it.

Did people not learn anything from having Ricky Gervais stand up and roast all the woke celebrities at whichever awards show it was that he was invited to host? It’s like that old parable of the frog and the scorpion — don’t get angry, and don’t be surprised … it’s in their nature.

Bill Burr was invited to the Grammies — it may surprise some of our readers, but it is still ‘a thing’, despite their cratering ratings — and the professional comic made some cracks about the show.

Here are a couple of quotes that tweaked the fragile egos of the 8 million or so benighted souls still watching that shlock. (For a reference point, the viewership is roughly half of what it was last year.)

“Was I the only one that wanted to kill himself during that piano solo? I bought a suit for this,” he joked. “I thought I was going to be on TV. I’m such a moron. I’m losing so much money.”

…”The feminists are going nuts. Why is the cis-white male doing all this Latino stuff?” he joked in a mocking tone.

While presenting the award for best regional Mexican music, he mispronounced the name of the winner, Natalia Lafourcade.

“I can’t say the name. The Grammy goes to Natalia Lafourcade. I will accept on behalf of her. If I butchered her name, I’m sorry. Natalia, you won.” — FoxNews

Social media lit up with outrage. All the usual lines were invoked… including hitting him with their favorite all-purpose career-destroying slander:

It didn’t work quite as well as they had hoped.

One of his fans defended him in a pretty reasonable way: 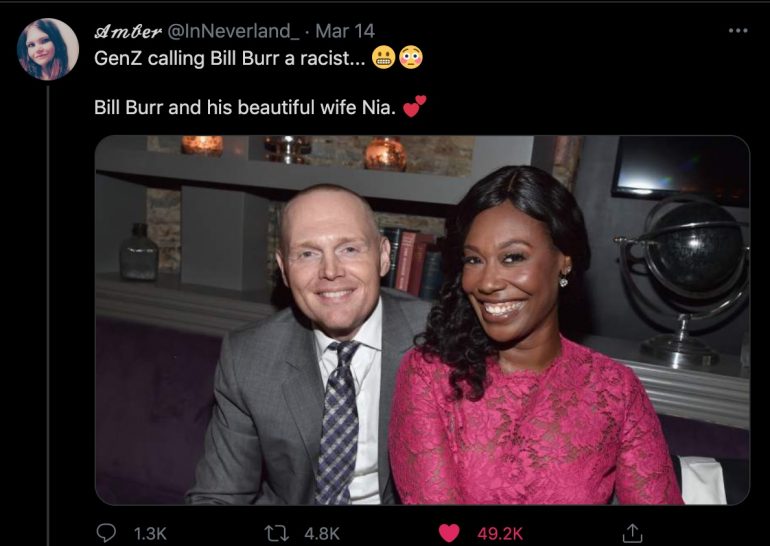 Here’s what happened in response to that defense.

A ‘but ackshually‘ guy piped up and tried to ‘educate’ us on how being married to someone who isn’t white is NOT evidence that you aren’t a ‘white supremacist’.

Since my own marriage has a similar dynamic to Bill Burr’s, this particular rant is (as you might imagine) a personal pet peeve. Here’s how he tried to ‘educate’ us.

Burr’s wife wasn’t having any of it.

She wasn’t the only one to dunk on him.

He tried to backpedal, but the damage was done.

Our own Mrs Walker dunked on him, too:

He tried to take the coward’s way out. 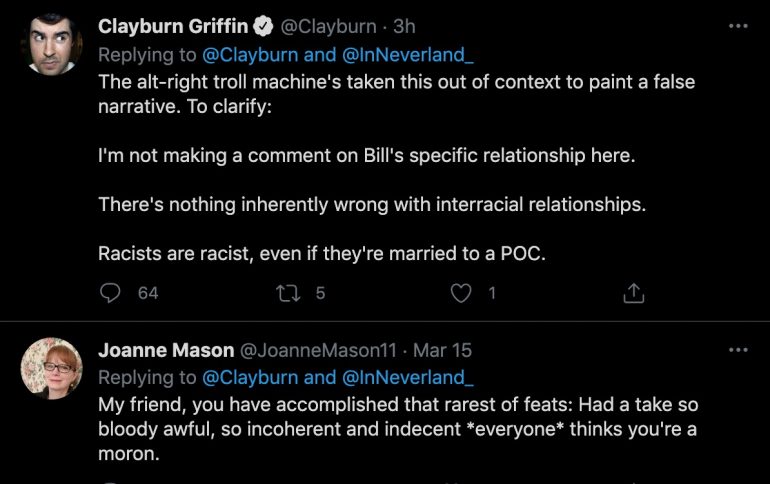 He got spanked AGAIN. 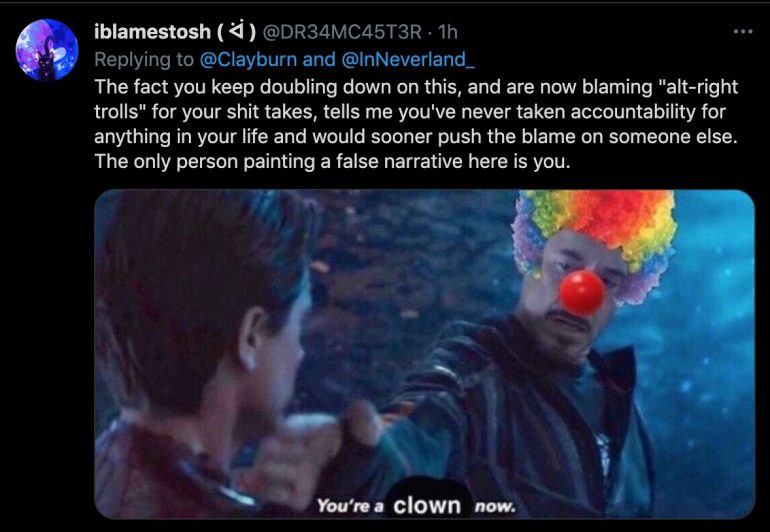 Picking a fight with someone AND their spouse – over a stupid unrelated issue – is a dangerous game.

Especially when you are busy trying to defend the indefensible in the process.