Ted Cruz is good at kicking a hornets’ nest of Democrats by blowing up their talking points. He did it again yesterday.

To fully appreciate this beat-down, we need quickly set up the context.

In carrying on with Obama’s ‘never let a crisis go to waste’ strategy, we can see the difference in how Biden used two consecutive tragedies to push Democrat talking points.

Last week, when some yahoo got it into his head to start killing off people at ‘massage parlors’ that would more properly be likened to brothels, Joe and Kamala went out of their way to single this out as racist attacks.

Neither the guy who did the killing, nor the FBI, give us any reason to believe this crime to have been racially motivated, but that didn’t stop Kamala and Joe from turning this into a lecture about racist attacks against Asian people, with the implication being that MAGA people (presumably white) are bigots and threatening serious harm to Asians because of something-something Wuhan virus.

Without unpacking the dumpster fire of stupid in that, let’s move ahead to how they handled the NEXT tragedy. Ten people get murdered in cold blood by someone sympathetic to Democrats and who was openly critical of Trump. Here are photos of the victims THIS killer left behind… 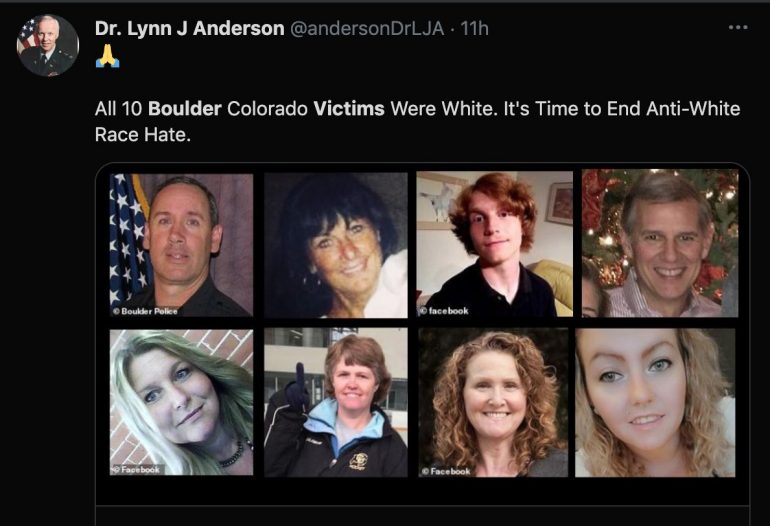 But never truly letting a crisis go to waste? That requires flexibility and plenty of cognitive dissonance. But for lifetime swamp rat and effortless liar, Joe and Kamala were ready.

These victims didn’t help push any of their narratives. The Oppressor checked all the wrong identity boxes. So they (and the other Democrats) seamlessly changed gears to their well-worn Gun Control narratives.

In the first instance, the MOTIVATION (racism) was the problem in the second instance the TOOL (a gun) was the problem. This brings us up to speed for the smackdown Cruz delivered on the Left.

Ted Cruz saw right through this tactic and ripped Dems a new one in the Senate. He talked about it afterward on Hannity.

The Democrat proposal is to take away guns from law-abiding citizens.

Instead, we should lock up those who try to buy firearms illegally. pic.twitter.com/aw1JTu8JVi

Here’s what he said in the Senate that riled up the left and had him trending on social media … again.

Democrats say Republicans are not offering any solutions to this problem. Not only is that a lie, but the solutions they offered that COULD have stopped shootings like this one and the massacre in Sutherland Springs were filibustered by Democrats.

Don’t let their talking points distract from the REAL issues of whether any of their policies actually IMPROVE anyone’s life in a meaningful way, or if this is just kabuki theatre in the service of their long-cherished goal of disarming all law-abiding citizens.

(It’s a policy perscription that the good citizens of Venezuela would surely love a do-over on.)