Historians, Bible scholars, Christians, and Jews are all geeking out over the discovery of new Dead Sea Scroll fragments. But maybe we’re missing something much bigger.

Not far from the Dead Sea, Archeologists have been systematically sifting through the rubble of some caves in the desert, hoping to discover any important historical artifacts before they get discovered and sold onto the antiquites black market.

While sifting through the rubble of a cave dubbed the ‘cave of horror’ because of the forty skeletons that were discovered there in the 1960s.

Here’s a look at where those discoveries were found on the map. The larger map of Israel on the left pinpoints (blue dot in the red circle) where the zoomed-in satellite picture on the right is taken from. 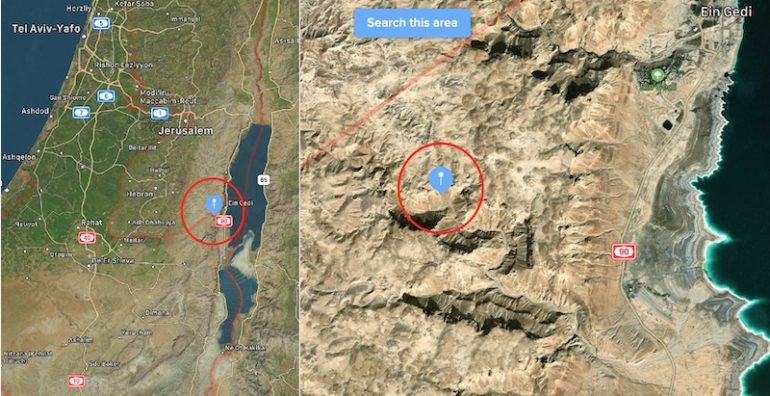 This cave is reportedly located in what is referred to by some as ‘the West Bank’.

“A group of refugees from the war—men, women, and children—fled to the desert and hid in caves on what is now the West Bank.” —Yahoo

The fact that this region was used as a refuge by Jews during the second century seems to lend at least some basic credence to claims of the area being ‘historically Jewish’. But that’s more a point of interest we can let others wrangle over as we move to more important points.

These Dead Sea Scrolls were a rare find in that they were a copy of the Greek translation of the Hebrew scriptures.

Unlike most of the Dead Sea Scrolls, which were written in Hebrew and Aramaic, the fragments from the Cave of Horror contain Greek letters. Scholars determined they came from a Greek translation of the Book of the Twelve in Hebrew, what many Christians call the Minor Prophets.

The job of reconstructing the original document is akin to trying to assemble a thousand-piece jigsaw puzzle with only a handful of pieces. The largest fragment contains portions of Zechariah 8:16–17, and some smaller bits are identified as Nahum 1:5–6. These pieces appear to be connected to other previously discovered fragments from the same cave along the ancient gorge of Nahal Hever and were part of a single large scroll including all of the minor prophets.
Source: Christianity Today

How old are the scrolls?

The rebels that were carrying them fled the Romans as part of a revolt in the time that Hadrian was the Emporer of Rome. The scrolls themselves are radio carbon dated to the second century.

The new pieces are believed to belong to a larger set of parchment fragments that include a Greek rendition of the Twelve Minor Prophets.

It is thought the newly found fragments are the missing parts of those scrolls, which were first found in 1952. They include Micah’s prophecy about the End of Days.

The IAA explained that while it is written in Greek, the new scroll fragments include the name of God in ancient Hebrew letters from the First Temple Period.

The scrolls themselves come from a time before the modern ‘Old Testament’ was finalised in the form we know it today, experts explained. —DailyMail

Our friends at the NOQ Report wrote an article that first brought our attention to which passages had been discovered.

Zechariah 8:16-17 in the ESV reads, “These are the things that you shall do: Speak the truth to one another; render in your gates judgments that are true and make for peace; do not devise evil in your hearts against one another, and love no false oath, for all these things I hate, declares the Lord.”

And Nahum 1:5-6 reads, “The mountains quake before him; the hills melt; the earth heaves before him, the world and all who dwell in it. Who can stand before his indignation? Who can endure the heat of his anger? His wrath is poured out like fire, and the rocks are broken into pieces by him.”

With everything else about the world in some kind of flux or turmoil, it’s a timely reminder to put first things first.

The fact that we have yet another early copy of scripture in a parallel language is one more piece of evidence weighing against the already-laughable ‘telephone game’ theory about scripture changing and evolving over time.

Even if there were a way to produce massive changes in one language over time, you would have to destroy older texts in the process, or else get mixed up with the differences. But beyond that you run into other problems, internal citations of one biblical author making reference to another biblical author, sometimes across time gaps of hundreds of years or, in the case of anything in the New Testament looking to King David’s time or earlier, more than 1000 years.

Critics of scripture who like to cite scriptural variances love to tell you about the ‘innumerable’ variances in scripture. What they are less keen on sharing is the degree to which these ‘innumerable’ errors are the self-correcting kind.

Imagine, for example, you had read the words: “The sun will set in hte eWst.”

You could see that sentence and call it unintelligible gibberish. A good English teacher might scrawl ‘see me after class’ on a paper in which such a sentence appeared. That would be a fair and honest assessment of it. But that is only ONE way to assess it. What if you were looking for meaning and authorial intent?

Can the reader understand what the writer was TRYING to say? Of course he can! The sun will set in the West.

Most of the ‘errors’ touted by critics are no more harmful to the understanding than having letters in the word ‘the’ transposed.

As it is, we have massive swaths of scripture in several languages going back to antiquity. What’s notable is how faithful our modern texts have remained to those ancient copies in the second centures, and how similar the texts in the Dead Sea scrolls, or other ancient citations of scripture match so neatly to words written about events in the Old testament.

What is the main reason this find is so important?

To answer that question with scripture…

“The grass withers, the flower fades, but the word of our God will stand forever.” –Isaiah 40:8