CHAZ/CHOP isn’t the only ‘no-go zone’ that sprang up from the aftermath of last summer’s race riots. There’s one in Minneapolis, too.

It just so happens to be the scene where a ‘juvenile’, whose age and identity have not been released, was fatally shot, and another individual injured with non-life-threatening gunshot wounds.

According to a preliminary investigation, police stated two groups of people were shooting at each other and that the groups had left the scene prior to officers’ arrival. — KSTP

Where did it occur? Within sight of the George Floyd memorial, where Floyd’s infamous last moments were captured on film. You will see people gathered around someone on the sidewalk in front of the very same restaurant that Floyd died

One person has died in a shooting at the George Floyd memorial in Minneapolis. Police say the shooting was the result of a 'verbal disagreement.' pic.twitter.com/y2UHF0teIn

Minneapolis Police say when they arrived on the scene officers were met with interference as they attempted to assess the situation. The area has been a so-called “no-go zone” for police since shortly after the death of George Floyd last year, complete with barricades to prevent access to first responders. 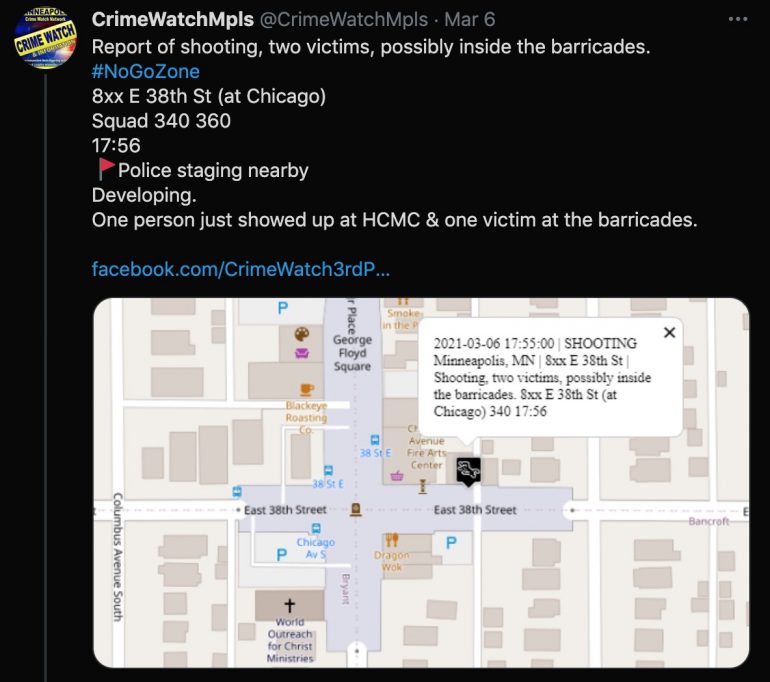 As tragic as the loss of any life might be, those on scene are fortunate it wasn’t far worse, if eyewitness accounts can be taken at face value. Five hundred is a LOT of gunshots. Even if that’s hyperbole, it tells us something about what she thinks she saw.

Now a manhunt is underway in Minneapolis following the fatal shooting of a black man nearby. A BLM activist who calls herself a medic for the ‘autonomous zone’ told the Washington Times that she heard what sounded like “500 gunshots” Saturday night during her shift.

According to the Times, as of Sunday night, no white people were allowed access to the area by local activists. The description mirrored Seattle’s autonomous zone established last summer. Pedestrians were asked to leave, with activist guards manning the gates. The zone has been plagued by crime since last year.

Neighbors told the Times, that they tried working with protesters, and asked that traffic not be disrupted. Activists allegedly responded with threats. Residents blame gang violence, BLM activists and protests as the primary cause of the unrest and crime. They added that safety concerns have caused people to move out of the neighborhood and pointed to multiple for-sale signs and empty houses nearby. Social justice-themed yard signs are common in the area with residents struggling to reconcile their beliefs with the rise in violence and decline in quality of life. Businesses have also left the area. —PostMillenial

That’s upsetting to the neighbors who actually live there, like Teresa Stiller, who lives a block away.

“We live here. We want to live here. This isn’t their neighborhood. I’ve had bullets whiz by me right here,” Stiller said on the sidewalk outside her home Sunday afternoon. “I have post-traumatic stress disorder now. Whenever I hear a loud noise, I either start crying, or I duck.”

Her neighbor Steve who says he’s a liberal has also had enough.

“We’re sick of it. I’ve got guys at the store telling me the Bloods [gang] were helping protect the place because others wanted to come and burn the place down altogether,” Steve, a self-identified liberal, said. “Check the [city council] out, with the rookie Mayor [Jacob Frey] and all these people who are comfortable [with what’s going on].”

Both primarily blame the BLM for the rise in lawlessness and the intimidation of the people who actually live there. Because of the moves to curtail the police by government officials, homicides and other crimes have surged and Teresa and Steve’s neighbors are selling and fleeing the area.

This does not bode well as the trial of the cop accused of killing George Floyd is now in the jury selection phase.

We note with interest the venom and outrage with which the events of January 6th were denounced as violent insurrection with participants and an entire political party broad-brushed as domestic terrorists, but since last summer, we have seen murders, intimidation, and heaven alone knows what other lawless acts within several barricaded blocks in different cities across America that an armed ‘protest group’ decides to claim as its own, and that’s chalked up as acceptable protest?

If they were Republicans or had rallied around non-racial causes, the Feds would have stormed the place by now. DC has been encircled with razor wire for far less.

Power without responsibility? That’s the playground of fake tough guys. The real deal takes a much bigger man and looks something like this.