In case you missed it, Tucker Carlson kicked off a helluva controversy when he dared to question the wisdom of Biden celebrating ‘Maternity flight suits’.

So much for them being ‘non-partisan’. But then again, should we have expected any less? Did the military ever recover from the ‘Purge of 197 Officers In Five Years‘ under Obama’? (Note: that number was given in 2013, long before the end of his second term.)

Nine senior commanding generals have been fired by the Obama administration this year, leading to speculation by active and retired members of the military that a purge of its commanders is under way. —InvestorsBusinessDaily

Between Obama’s purge, and President Asterisk swinging for the fences of ‘woke-ness’ none of this should surprise us. But Tucker Carlson blasted Biden for celebrating ‘maternity flight suits’ in a public speech. As more than one person observed, this outrage came at an interesting time: 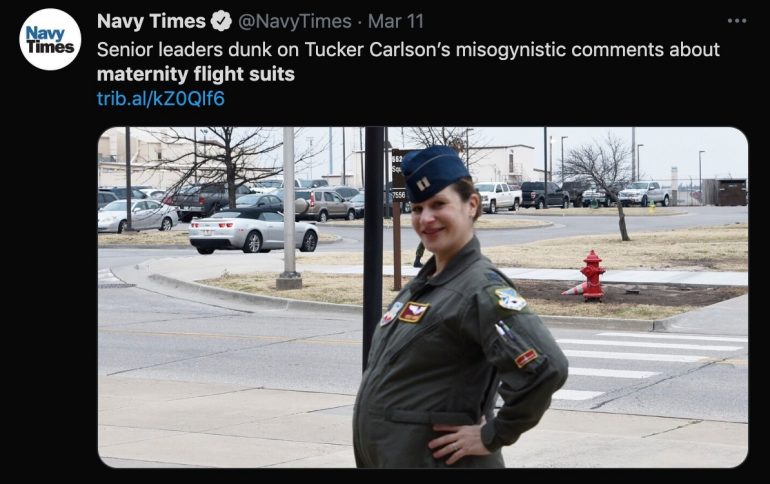 … no less distinguised a person than Army Col Kurt Schlicter has been putting them all in their place.

He wrote a scathing thread on social media on the topic: 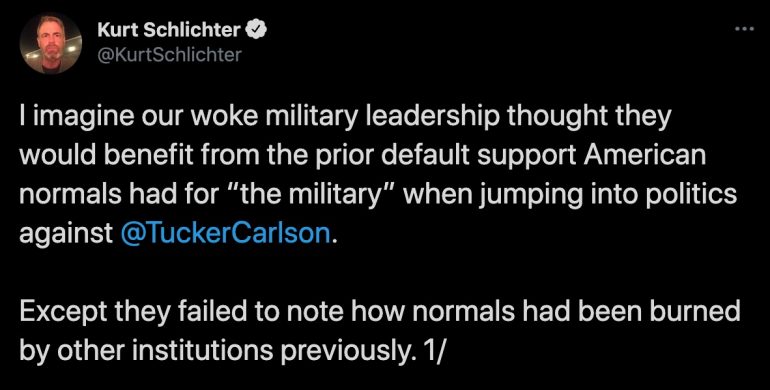 We owe it to our troops & our country to demand nothing less than a military that is focused solely on deterring and winning wars, that is totally outside of politics, and that is dedicated not to one party or some alien faculty lounge ideology, but to the Constitution.

When Obama said he was aiming to ‘fundamentally transform’ America, he really meant it. Just look at us now.

It was one thing when people enlisted in exchange for having Uncle Sam pick up the tab for a college education. But making the taxpayer pick up the tab for gender reassignment surgery? How much of the budget will be tied up in elective surgery costs?

Show me in the Constitution where federal commitment to ‘the common defense’ was intended to include reassignment for any Tom, Dick, or Mary who wanted to radically change their bodies?

Take as long as you need. We’ll wait…