Biden’s official policy is just like Obama’s. Give no credit and take no blame. But Grenell has dropped the gauntlet in his reply.

They are hard at work getting the talking points out for reporters to spin their revisionist histories — Everything done in the last 4 years was TheWorst™ and isn’t America lucky that Old Joe rode in on his white horse to save the day?

It should surprise exactly nobody then, that Joe’s Secretary of State would be singing from exactly that same songsheet.

Blinken seems to have it in his head that there was no diplomacy done over the past 4 years in a tweet saying:

Diplomacy is back at the center of U.S. foreign policy. Today, I’m en route to Tokyo and Seoul to discuss how the United States will strengthen our cooperation in the #IndoPacific and across the globe with two of our closest allies.

To underscore his intended point, photos were attached…

Diplomacy is back at the center of U.S. foreign policy. Today, I’m en route to Tokyo and Seoul to discuss how the United States will strengthen our cooperation in the #IndoPacific and across the globe with two of our closest allies. pic.twitter.com/m9s0VBeNiD

Unfortunately for him, someone who was actually DOING diplomacy under Trump — including ending hostilities that had been unresolved between Serbia and Kosovo since what, the Clinton administration?

That deal was followed up with a string of peace deals throughout the Middle East, with several signed, and others making good-faith gestures toward a more permanent solution.

No fewer than five different groups have nominated President Trump for the Nobel Peace prize as a result… and he went about it exactly the way that Democrat ‘experts’ told him was doomed to failure.

Had dirty politics and a bulls**t Russian Collusion narrative not helped flip the 2018 midterms so that bad-faith Democrats like Pelosi and Schiff could use it to weaken the President’s capacity on the World Stage with endless investigations and a couple of bogus imeachment trials, (not to mention the massive detour the Chinavirus crisis imposed on the entire world) there is no telling what an unencumbered President Trump might have accomplished with respect to Iran, North Korea or others.

Even the ‘diplomats’ working under Trump included one who said something under oath (in Impeachment 1.0) that was later shown to be false, and another person who testified in impeachment 1.0 was found to have played a role with the Crossfire Hurricane plotting. If that’s ‘normal’ diplomacy, we should really scrap the old way and start over.

What did Richard Grenell have to say about Blinken’s self-congratulatory tweet? 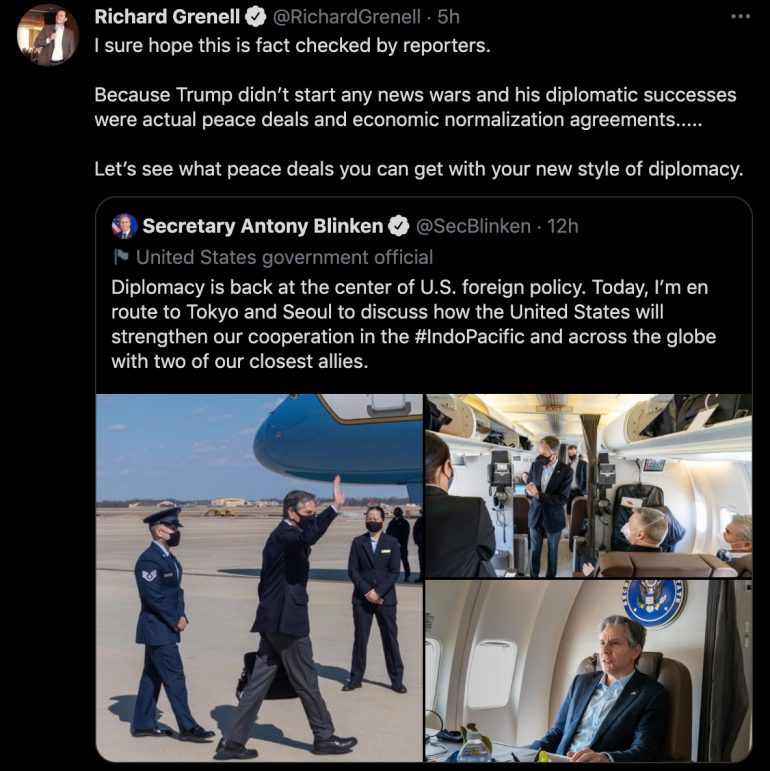 There’s an under-appreciated line in the Old Testament that fits this situation from I Kings 20:

Then the king of Israel replied, “Tell him, ‘He who straps on his weapons had better not boast like one who takes them off.’”

In other words, any fool can talk smack after a couple of weeks on the job, but can you deliver the goods?

If his job is to push Biden’s policies … well, we’ve already seen how well things are going on that Southern border, haven’t we?