Kudos to this teacher who is saying what so many people are thinking. This is what we all need to see more of.

This teacher from Loudoun County, Virginia decided that she’s had enough of the overt racism of Critical Race Theory (CRT) that is being pushed on educators and makes its way into classrooms either through the inevitable trickling-down or the deliberate insertion into the curriculum.

She lays it all out — the focus on how bad white people are is a toxic practice that sucks the life out and joy of teaching. She basically says that the board’s fixation on Critical Race Theory is why they’re losing families who are increasingly dissatisfied with the education that their children are getting.

The Loudoun County school board is one of the top boards in the state, but has embraced the toxic CRT ideology, was one of the first to denounce Dr. Seuss, and is now demanding that teachers embrace Critical Race Theory or be fired.

Here is one teacher’s response to that.

God bless her. Public School teacher goes nuclear on the Critical Race Theory insanity— and calls it what it is… straight-up racism. pic.twitter.com/wm0JU2xewp

In normal times, this is not something that would need to be lauded since it’s just the thing that normal non-racist people would do, but in the cancel culture era, this teacher is potentially putting her job, reputation, and even her safety on the line by stating this publicly.

This teacher says that the Board is privileged. She’s absolutely right. They can just embrace what is now the fashionable position, Critical Race Theory, and impose it on teachers without question. There is no nuance in CRT, it’s quite literally black or white, and if you don’t call their overt racism “anti-racism” then you’re on the chopping block.

Eric Weinstein, a cultural commentator, podcaster, and the man who coined the term “Intellectual Dark Web” is one of the (far too few) public intellectuals who want to have open and honest discussions and is a vocal critic of “cancel culture.”

They will throttle your account. They will tell you that you are the far right. They may get you fired.

But if you deplore racism, you have to fight racists who have switched all the labels in the medicine cabinet. Otherwise you can’t really fight racism if a label confuses you.

Why is Critical Race Theory so toxic? Because it insists that everyone is racist because we are all part of a racist system. Anyone who accepts this “racist system” no matter what race they belong to is perpetuating the racism. The only way to change things is to dismantle the system by rejecting things that are “systemically racist” ie. anything that can be categorized as “white.” We’ve seen what they are attributing to “whiteness” — things like objectivity, hard work, correct answers in math, and the nuclear family. Do you believe that any of those things have value? Then, according to the CRT experts, congrats, you’re racist!

First, Critical Race Theory views race and racism this way: race is a political construction that was invented by white people to give themselves power while excluding all other races from it, and racism is the ordinary state of affairs in society, present in all interactions, institutions, and phenomena, and effectively permanent in society (short of a full sociocultural revolution that puts them in charge). That is, Critical Race Theory assumes that racism is present in everything under a doctrine known as “systemic racism.” …

…Second, Critical Race Theory does not continue the legacy of the Civil Rights Movement, as many incorrectly believe. It is against liberalism and the liberal order upon which Western societies are founded, and it rejects both equality and neutral principles of constitutional law (these were the backbone of both the abolitionist movement that ended slavery and the Civil Rights Movement). It also rejects legal reasoning and Enlightenment rationalism. This makes Critical Race Theory unreasonable, illiberal, against equality, and anti-American, by definition.

This is what is being taught in schools with works by grifters like Robin D’Angelo and Ibram X. Kendi promoted despite their clearly stated struggles with their own racism. It’s all projection.

Kendi, who had advocated for establishing a “Department of Antiracism” which would be able to strike down local laws if they were deemed to be “inequitable” — let the cat out of the bag when he used this circular reasoning known as a Kafkatrap.

“There’s no hope,” says Kendi and the other CRT grifters, “but hey, keep handing over your money, you evil, white racists!”

This is Critical Race Theory summed up in one image: 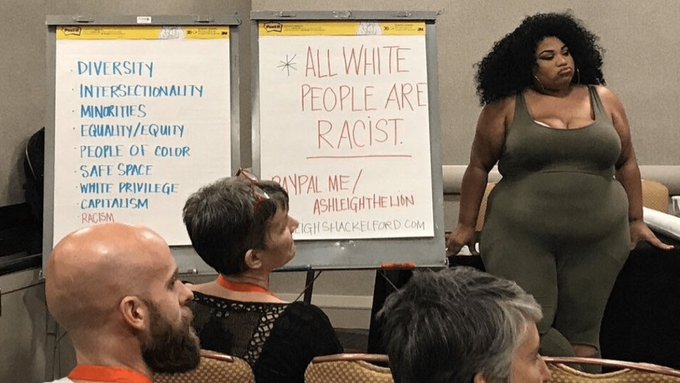 We all need to speak out against it like that brave teacher in Virginia.