In our current race-obsessed news media, there hasn’t been much mention of the race of the victims in Boulder. Why is that?

Black Lives Matter quickly jumps on every single shooting that involves a police officer and a black man who may or may not be armed and disregard the facts in each individual case to show that there is “systemic racism” in police forces. The media pushed a racial narrative in the tragic Atlanta shooting when the shooter himself says he was motivated by sex addiction. The race of the victims is almost always the headliner…except when doesn’t help fuel the narrative of “systemic racism” or “white supremacy.”

On March 21, a man opened fire in a Boulder, Colorado grocery store and many people were quick to assume that this was just “one more” mass shooting by a “white man” who hates minorities.

There was an initial fixation on the “whiteness” of the shooter right up until he was identified.

Activist Amy Siskind before the shooter was identified:

Even Co-President Kamala Harris’s niece got in on the blame white men action: 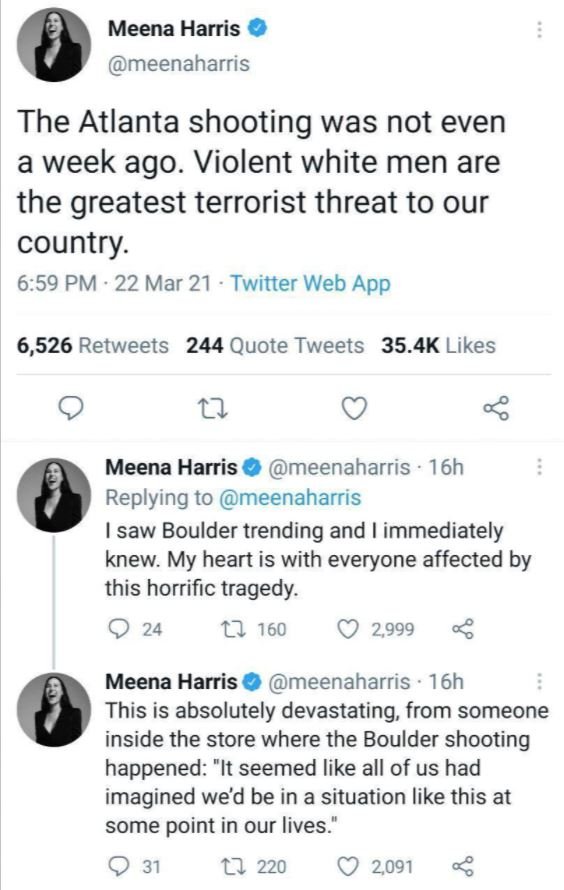 She later deleted the tweet saying that she just assumed his race was white because he was brought in alive.

It turns out that the shooter wasn’t exactly that “white supremacist Christian” that the media wanted him to be — Ahmad Al Aliwi Alissa is a 21-year-old Muslim and a refugee from Syria.

Here’s What We Know About The Boulder, Colorado Shooter So Far…

Bizarrely, some are still trying to cling to this “white” narrative. 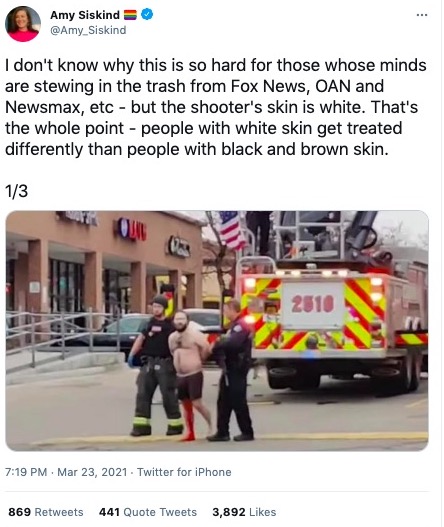 Once it was revealed that he was Muslim, Rep. Ilhan Omar (D-MN) dropped this spectacular load of BS… 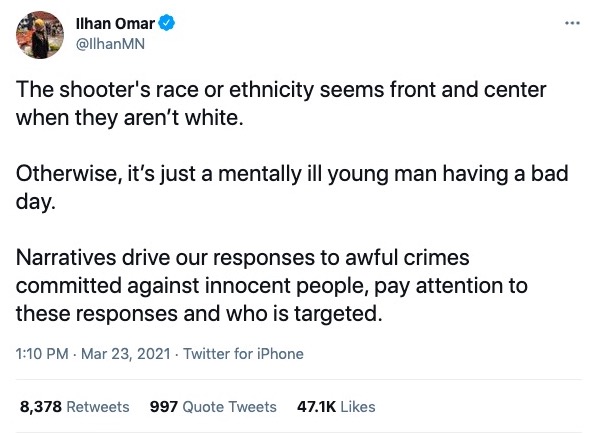 As stupid as her take is, her point about narrative driving responses is actually pretty true, especially her point that there are awful crimes committed against innocent people and we should pay attention to who is targeted and the media response.

Still, there hasn’t been much ink spilled on the race of his victims.

Photographs of the 10 people killed by suspect Ahmad al-Issa in #Boulder, Colo. I was told a few days ago that the race of victims in shootings matter even if there is no evidence of race playing a role in the attack. pic.twitter.com/fxiG4jGbdM

…all of the victims are white.

While it’s important to remember the victims here, that’s not what this post is about. I encourage you to read the NPR profile of the victims. These are all people who had their life cut short because of a senseless act of violence.

The race of his victims is pretty interesting since Ahmad Al Aliwi Alissa could be described as one of those “anti-racist” activists. His social media was definitely anti-Trump, pro-refugee, and showed that he identified as Muslim.

Ahmad al-Issa, the suspect in the #Boulder, Colo. mass shooting, has had his social media removed. What posts some manage to see & screenshot show he identified as a Muslim & had grievances against Trump, US refugee settlement & Islamophobia. https://t.co/Xa5omrbRY2

So, why not note that all 10 people that Alissa shot were white?

Maybe because it happened in Boulder, which is predominantly white. Or perhaps it’s because it was initially believed to be a white-on-white crime.

We’ve been told for years that mass shooters are generally white men.

Going back to Rep. Omar’s point about narrative, Mr. Andy Ngo posted another set of collages that are just as illustrative as his one about the victims of the Boulder shooting:

The suspects in American mass shootings (defined as four or more shot in a single incident) also look diverse for the 2020 data set. #Boulder #Atlanta pic.twitter.com/A9OgqaYpJH

Narrative matters, and to portray this as a Muslim-on-white crime is not something that the media is willing to do, even though they deliberately shaped the narrative of the Atlanta shooting as “anti-Asian” despite non-Asians also killed in that attack. (The media is missing a larger story there, by the way. The one about why Asian immigrant women are often working at the “rub-and-tug” places in the first place.)

It all comes down to this — the media didn’t focus on the race of the Boulder victims because they didn’t want to.  It didn’t work for them.

They don’t seem to particularly care about white people shot by a Muslim or a white person or a “white Syrian” or whatever because it doesn’t further their narrative that we have a problem of violence against one particular racial group and the other lives in no fear for their lives as they go about their daily lives. LeBron James said on Twitter that black people are “literally hunted EVERYDAY/EVERYTIME we step foot outside the comfort of our homes!” in the wake of the truly awful death of Ahmaud Arbery. That’s an absurdly extreme reaction to a tragedy, but that’s what the media has done. They shape the narrative. Do you think that LeBron James will say the same about white people fearing going to the grocery store now? I doubt it.

The neo-Marxists that are using race as the tool to divide us have the media on their side.

It’s time for those of us that truly believe that racism is evil to push back against this dehumanizing nonsense and call them out for it.

This is my opening salvo calling out the overtly racist corporate media’s coverage in an op-ed. How are you going to hold them accountable for their race-baiting? Consider letters to the editor, calling them on it in social media, canceling subscriptions, opinion pieces like this one, and supporting financially the outlets that refuse to racialize everything and push back on it. Just rolling your eyes and lamenting it isn’t good enough anymore.

“The only thing necessary for the triumph of evil is for good men to do nothing.”