In case there was any doubt as to whether Iran sees Joe as Obama’s defacto third term, wonder no longer. Their ships are picking up where they left off under Obama’s presidency. 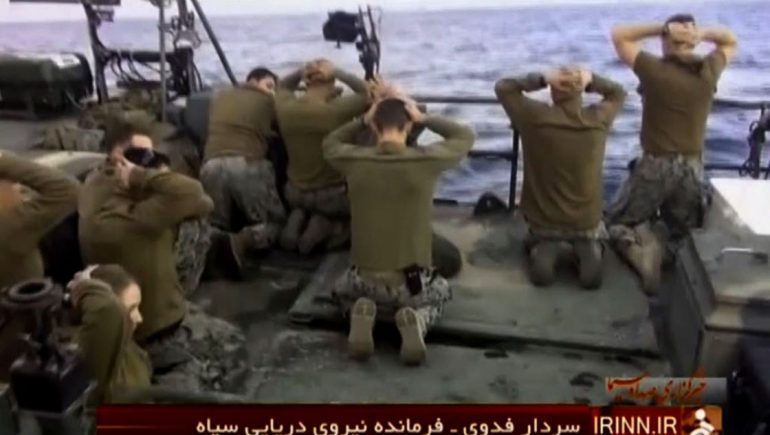 Well, we’re not QUITE back to that point… but we’re well on our way.

The Navy released black-and-white footage of the encounter Monday night in international waters of the northern reaches of the Persian Gulf. In it, lights can be seen in the distance and what appears to be a single gunshot can be heard, with a tracer round racing across the top of the water.

Iran did not immediately acknowledge the incident.

The Navy said the USS Firebolt fired the warning shots after three fast-attack Guard vessels came within 68 yards (62 meters) of it and the U.S. Coast Guard patrol boat USCGC Baranoff.

“The U.S. crews issued multiple warnings via bridge-to-bridge radio and loud-hailer devices, but the (Guard) vessels continued their close range maneuvers,” said Cmdr. Rebecca Rebarich, a spokeswoman for the Mideast-based 5th Fleet. “The crew of Firebolt then fired warning shots, and the (Guard) vessels moved away to a safe distance from the U.S. vessels.”

She called on the Guard to “operate with due regard for the safety of all vessels as required by international law.”

“U.S. naval forces continue to remain vigilant and are trained to act in a professional manner, while our commanding officers retain the inherent right to act in self-defense,” she said.

Iran did something similar on April 2, causing the Coast Guard ship to abruptly stop, leaving its engine smoking.

The explanation the news people are offering is that hardliners are determined to derail the nuclear talks.

There is another possibility. Biden’s pre-emptive surrender in his nuclear negotiations might have signaled to Iran that he’s easily pushed around by bullies.

If IAEA Found Prohibited Uranium In Iran Why Is Biden Trying To Revive The Nuke Deal?

After all, do you remember what Iran was doing the last time he was in the White House?

Bluster about push-up contests or taking someone behind the gym might impress your media flunkies, but that won’t cut it on the world stage.