At about one in the afternoon, a quiet day turned to chaos in the Capitol when a blue sedan was turned into a lethal weapon in a series of events that left 2 dead.

A security barrier installed after 9/11 was activated and is the reason the assailant was unable to force his way deeper into the Capitol.

The suspect who rammed two U.S. Capitol Police officers at a barricade appeared to have a knife and was shot by police.

That’s according to two law enforcement officials who spoke to The Associated Press on Friday. The officials could not discuss an ongoing investigation and spoke to the AP on condition of anonymity.

The officials say the suspect was critically wounded and was taken into custody.

The incident happened at a checkpoint near the Capitol. The Capitol complex was locked down after the shooting.

The U.S. Capitol remained on lockdown Friday afternoon after a car rammed a barricade outside the Senate, though the building was largely empty due to a two-week recess.

Alerts sent out by police said that people in the Capitol were not allowed to exit the building while the police were responding to the incident, in which the driver got out of the vehicle while appearing to brandish a knife before being shot by authorities. But the hallways were mostly empty despite the chaos outside.

The Capitol complex has been on high alert since the Jan. 6 attack by former President Donald Trump’s supporters, which left five people dead. National Guard troops who have guarded the building since then were seen mobilizing around the area of the incident.

The car hit a barricade just outside the Senate, on a street that had recently been reopened after the Jan. 6 insurrection. –AP

After hitting those cops and crashing his car, the assailant left his car with a knife in his hand and was moving ‘aggressively’ toward the police when he was shot dead.

Fox News Congressional Correspondent Jacqui Heinrich was live-Tweeting along with video what was going on at Capitol Hill.

We are on lockdown. Loudspeaker announcing in Russell Senate Office external security threat, stay away from windows, do not enter or exit. Can hear sirens.

Large police presence and two stretchers being brought out pic.twitter.com/EmidoLP0PT

Here is video of the assailant being wheeled away on a stretcher before he was declared dead.

The Capitol suspect that hit and stabbed 2 officers, killing one: pic.twitter.com/I0UoWDxFxu

The investigation is still in its preliminary steps, and we cannot yet say what this individual’s motives are.

Blue checks gave us the same old song and dance… 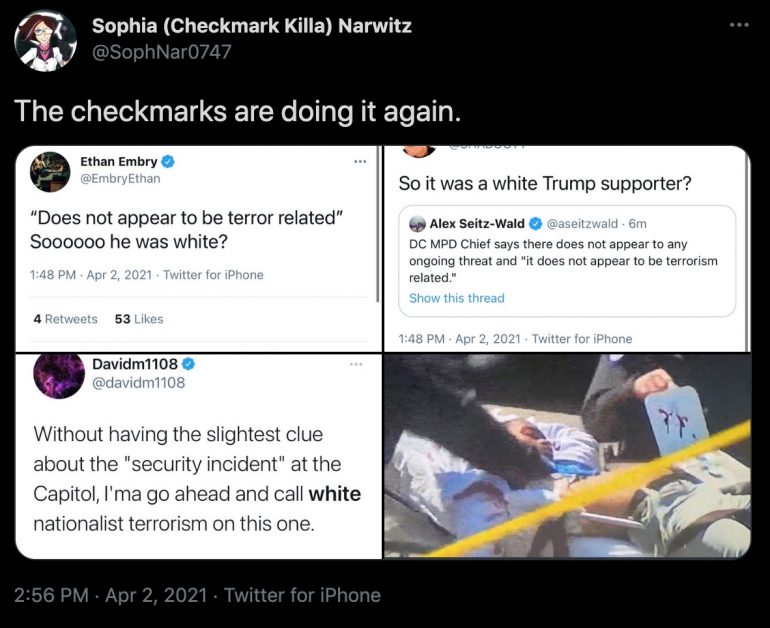 We have his name now. 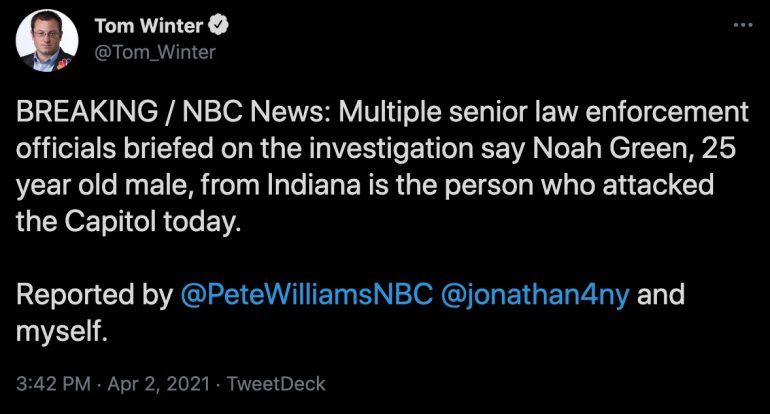 Preliminary looks at what is believed to be his social media blow a whole in that whole ‘white supremacist’ angle. 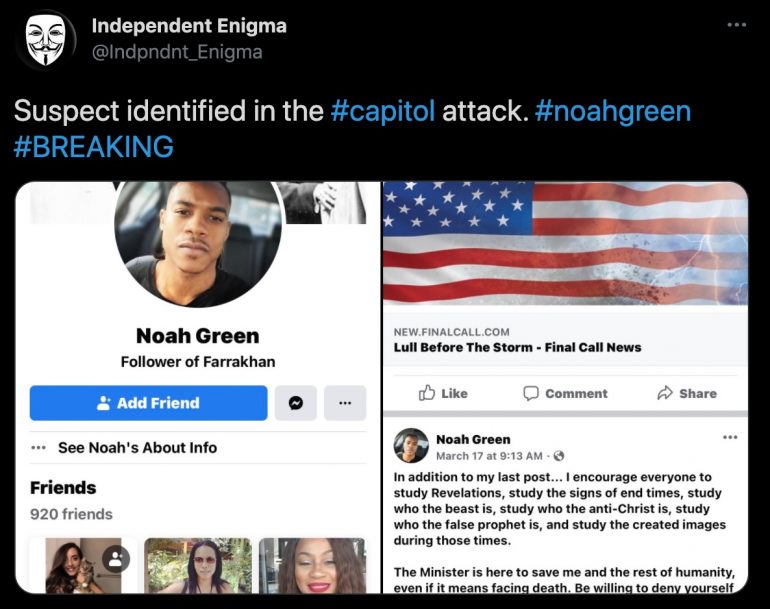 This is apparently his last FB post. He was a devotee of @LouisFarrakhan and the #NationofIslam. pic.twitter.com/AlLDiwVUpf