In case you were wondering if Big Tech was interested in ‘facts’ or in ‘narrative’ in their selective editing… here is your answer.

Many of you will already be familiar with the internet handle ‘An0maly’. Since the story centers on him being censored, let’s bring the rest of us up to speed.

In case you were wondering if he’s a rando or a ‘big fish’, here’s a screenshot of his Twitter bio, in which we circled a relevant number: 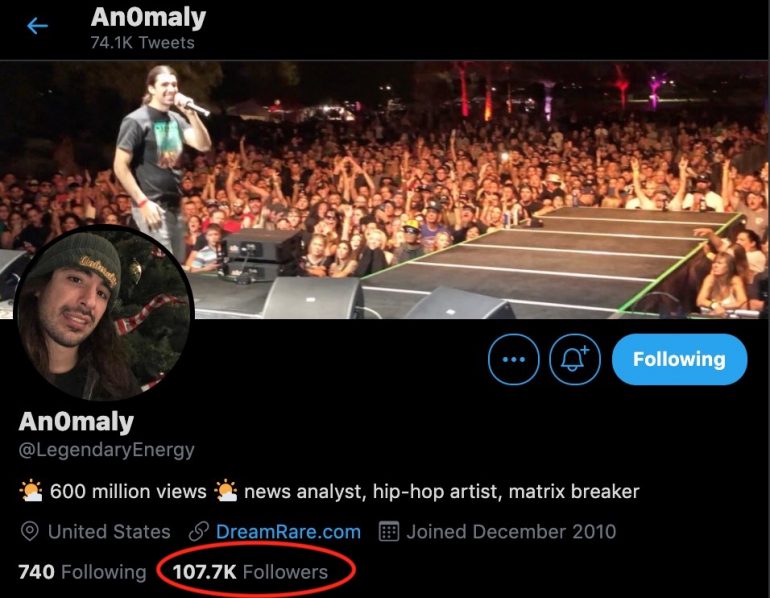 If someone has more followers than Boulder Colorado has residents, he’s not easily dismissed as an internet lightweight.

He’s hard to nail down politically. He doesn’t pull punches from the left, but he doesn’t pull punches from the right either. For example, he’s had some withering criticism for Trump, not for the boilerplate reasons you’d hear from the left or NeverTrumpers, but because he thought, for example, that Trump failed to defend the Constitution effectively enough during COVID shutdowns, and with respect to the Second Amendment.

That gives you an idea of where he’s coming from. Not a partisan, exactly, but more or less sympathetic to the values of the right.

You might expect that an ‘equal opportunity offender’ would have something to say about the party presently in power. You would be correct. But the Big Tech censors didn’t like it … not at all.

Here’s what he did.

When Jen Psaki claimed that the current crop of COVID vaccines were FDA approved, An0moly did some very straightforward digging and came back with the government’s own numbers.

As we all know, because of the nature of Operation Warp Speed and of the problem it was created to solve — lives hanging in the balance, we were assured, and an economy that would be stalled until we could defeat this invisible enemy — we were not willing to wait for the usual process to unfold.

What does a government do when the urgency of the situation won’t allow us to wait years and years for medical trials to run their course?

It’s obvious, isn’t it? In a situation like that, they do the very thing that Anom0ly mentioned in his video.

This is the video they are now censoring, threatening & restricting my page over.

They hate the truth.
pic.twitter.com/uBuYIkvD53

He even explains his ‘why…

Our ‘why’ is similar.

We think every person should have the right to informed consent; to be treated as if they are adult enough to weigh his or her own risk tolerance deciding if the cost/benefit equation is worth it.

Don’t blow sunshine up our ass for the ‘greater good’ so you can dupe a credulous public into taking the actions YOU have decided are best for us.

Fauci did that when he told us masks are no good for the public… and then he admitted he was lying.

He meant it at first, and decided it was advantageous to lie now.

You see, when someone (like Little Lord Fauci) deliberately uses an appeal to authority to intentionally dupe people — and gets caught in a lie — it becomes impossible to know for certain which statements are the ‘noble lies’ told to cow us into obedience, and which are told to us in good faith.

And when Big Tech joins in and censors fact-checkers giving us straightforward facts?

They only prove that their motives and ‘fact-checks’ can’t be trusted either.

And like Anom0ly mentions in his tweet… sets up potential grounds for a legal challenge. These ‘fact checks’ aren’t being done in good faith… and by Justice Thomas’ own observations… might not, as such, be protected from the Section 230 shield they have been hiding behind.

Are freedom-loving patriots finally ready to go gloves-off and test the strength of these legal protections now?

New Jersey: While Arresting A Cop For Domestic Violence, Police Discover He’s Running A Meth Lab Too
May 18th, 2021 Sons of Liberty Media

Why is the CDC lying about outdoor covid transmission?
May 18th, 2021 DC Clothesline