It’s been rumored that the most famous transgender woman in America was exploring running for governor. It’s a rumor no longer.

Caitlyn Jenner, former reality TV star and Olympic Gold medalist in (quite literally) a former life, has filed the paperwork to run for Governor in California. Gavin Newsom, the current Governor is facing a recall bid, and could face a real challenge from a celebrity with deep pockets, widespread name recognition, and a rather interesting campaign team.

According to Axios, Jenner, a Republican, has assembled a number of GOP operatives including quite a selection of Trump alumni.

Jenner was assisted in assembling the team by Brad Parscale, a personal friend who was also Trump’s former campaign manager and successfully ran his social media campaign in 2016. To date, Parscale has not taken an official role in Jenner’s campaign.

The campaign website and WinRed donation page are set to go live today.

I’m in! California is worth fighting for. Visit https://t.co/a1SfOAMZQ3 to follow or donate today. #RecallNewsom pic.twitter.com/9yCck3KK4D 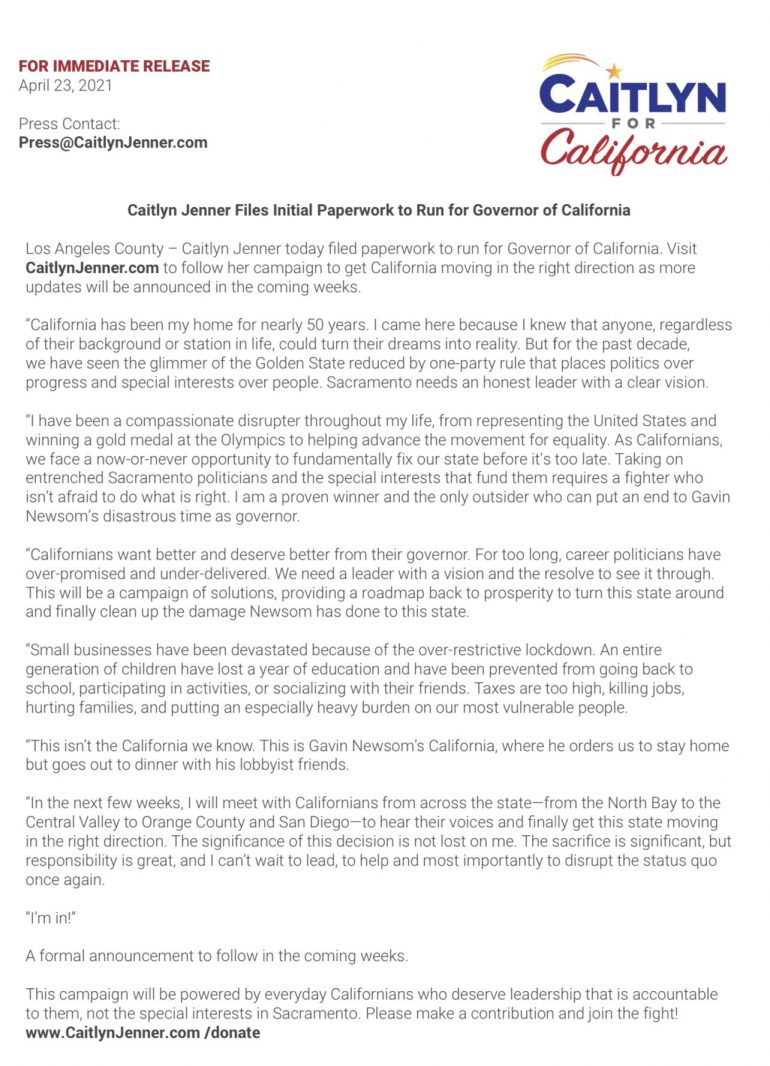 In a statement, Jenner said, “for the past decade, we have seen the glimmer of the Golden State reduced by one-party rule that places politics over progress and special interests over people,” adding, “Sacramento needs an honest leader with a clear vision.”

Jenner said that Californians “face a now-or-never opportunity to fundamentally fix our state before it’s too late.”

Jenner is positioned as the “fiscally-conservative, socially-liberal” outsider candidate that will take on “entrenched Sacramento politicians and the special interests that fund them.”

In the letter, Jenner slams Governer Mousse-ilini for his COVID lockdowns that have devastated small businesses in the state while also taking a dig at his little jaunt to The French Laundry.

“This isn’t the California we know. This is Gavin Newsom’s California, where he orders us to stay home but goes out to dinner with his lobbyist friends,” states the letter.

Things just got quite interesting in California.

It’s important to note that Republican in California means something much different than Republican in a die-hard red state. The “Buckley Rule” coined by Bill Buckley is that we should support “the rightwardmost viable candidate” available. In this case, that just might be Caitlyn Jenner. Weird, I know.

I’m old enough to remember that there was a whole lot of laughter when Schwarzenegger tossed his hat in the ring during the recall of Gray Davis in 2003…right up until he won and became the “Governator.” And yes, he was a disappointment in many ways to “conservative” values, but…he kept Cali from going completely off the leftwing deep-end.

So…would you vote for Caitlyn Jenner?