‘Enemy of the people’ is a verboten term because it invokes 20th-century authoritarians. In that case, we’ll need some other term to describe the media’s willful endangerment of entire communities.

There is a difference between reporting events and reporting narratives. Reporting facts will have a journalist explain who did what to whom, without particularly looking for how that incident fit within a larger story.

To use a relatively harmless example, Rush Limbaugh pointed out years ago how many SUVs were explicitly mentioned in traffic accidents… which brought greater attention to an SUV being present. Which in turn made SUVs seem to have a higher than average likelihood of being involved in such incidents. I seem to remember him even putting together a parody song about it.

In a far less harmless example, the deliberate emphasis on altercations between black Americans and the police has the same magnifying effect. There are people who genuinely believe that there is a rampant problem of police murdering black people for sport, to the point that they believe there is a greater chance of being shot dead by a cop than of dying in a car accident, despite stats to the contrary.

Even the data looking at race in the context of police-involved fatalities do not support that assumption.

But Democrats, and activists, and the media have deliberately worked hard to magnify that narrative… even when they knew it wasn’t true. How else can you explain a ‘news’ paper knowing a year and a half ahead of a election, what political angle they were planning to use in every story about the sitting President?

The media went so far as to deliberately ignore true facts that would have taken some of the strength away from, for example, the BLM ‘white people are dangerous racists’ narrative.

PART 3: Project Veritas Shows CNN Is Deliberately Stoking The Fires Of Racial Strife (VIDEO)
Did they really think we could tell ourselves lies without paying a price for it? We’ve ginned up hatred toward the police. Then our media and Democrats turned a blind eye when ‘protesters’ assaulted them, wounded them, and firebombed vehicles in which they sat… while demonizing them as systematically racist, denouncing various individual interactions as proof positive of racism — without a shred of supporting evidence — and encouraging the public to treat them with contempt.

What did they THINK would happen next? It was exactly what most of us predicted:

No police officer should work in a jurisdiction where they do not have the support of those they work for. Beginning today, I will no longer recommend young people consider the NYPD as a career. https://t.co/eX85GZB9vn

The members of the NYPD grew so disenchanted with their jobs in 2020 that over 5,300 uniformed officers either retired or quit, an astonishing 75% increase over the year before, amounting to 15% of the total number of officers on the force. The impetus for the officers quitting seemed to be the death of George Floyd and the unrest that followed; between May 25 and June 24, 2020, a whopping 272 officers left the force in one month.

…The Mayor and City Council are absolutely trying to abolish the police. They’ve kept our pay absurdly low. They’ve ratcheted up our exposure to lawsuits. They’ve demonized us at every opportunity. And they’ve taken away the tools we need to do the job we all signed up for, which is to keep our communities safe.

Now the NYPD is spending money on slick recruiting ads to replace the experienced cops who are leaving in droves. City Hall should just admit the truth: police abolition-through-attrition is their goal. They won’t stop until the job has become completely unbearable, and they’re getting closer to that goal with every passing day. — DailyWire

That’s just the numbers in NYPD. The same scenario is playing out in big cities everywhere.

We know what follows a cratering in active police protection, don’t we? The risk/reward equasion for criminality shifts in the bad guy’s favor… and so: 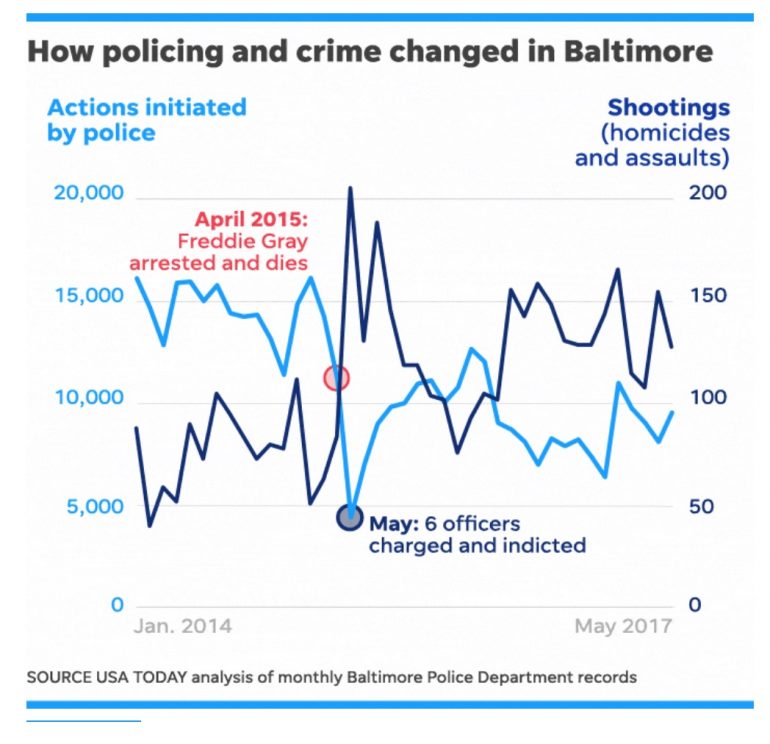 The following references a survey taken back in 2017:

One glaring problem with their insistence that cops were not reluctant to use force or be as proactive is that the cops kept insisting this was indeed the case. A survey from 2017 states that:

More than three-quarters of U.S. law enforcement officers say they are reluctant to use force when necessary, and nearly as many — 72% — say they or their colleagues are more reluctant to stop and question people who seem suspicious as a result of increased scrutiny of police, according to a new study published Wednesday by the Pew Research Center.

The wide-ranging, national survey — which includes feedback from 8,000 officers and sheriff’s deputies — quantifies just how pervasive the issue has become in departments across the U.S. in the aftermath of a series of controversial deadly encounters between police and African-American suspects. –NationalReview

The incentives have not moved in the favor of vigorous enforcement.

Like so many kinds of ‘death spiral’ the cratering of policing is not a problem that’s easily bounced back from once it’s happened. Look at what happened in Baltimore, when they realized that they needed more police, not fewer. HEY BLM: Baltimore And Treyvon’s Mom Agree, We Need MORE Cops, Not Fewer