We are constantly told by the Corporate Media, activists, and celebrities that law enforcement officers target black people and kill them. Well, let’s take a look at the actual numbers, shall we?

Now, before I dive into the numbers here, I don’t want anyone to think that this article says that there are no racist cops or that racism isn’t a factor in some police interactions with individuals. Cops are people. People are flawed. You will find all manner of evil in any group in society. The point here, though, is that public policy is being pushed based on the idea that there is rampant racism in police interactions and this is causing the “disproportionate” deaths of black men.

At least, that’s what Black Lives Matter, the multi-million-dollar not-for-profit activist organization that has a presence all over the world claims. Well, that and pushing for unionization of Amazon employees in Alabama, pushing for Medicare-For-All, supporting expelling GOP members of Congress who voted against certifying the 2020 Presidential election results, among other “global action” items.

Besides overt Marxism, BLM is primarily about black men killed by cops. The organization was even criticized for not properly addressing the plight of black women in their everything-but-the-kitchen-sink movement. Even Breonna Taylor’s death wasn’t embraced by the national BLM organization as early as the death of George Floyd and other black men had been.

The thing is, the data does not support the idea that black men are being gunned down by police at a higher rate than white men. In fact, the actual data shows quite the opposite.

Here’s what you’ll see there.

Between January 1, 2015, to the time of this writing, 6,211 people have been shot and killed by police. That number includes both men and women. 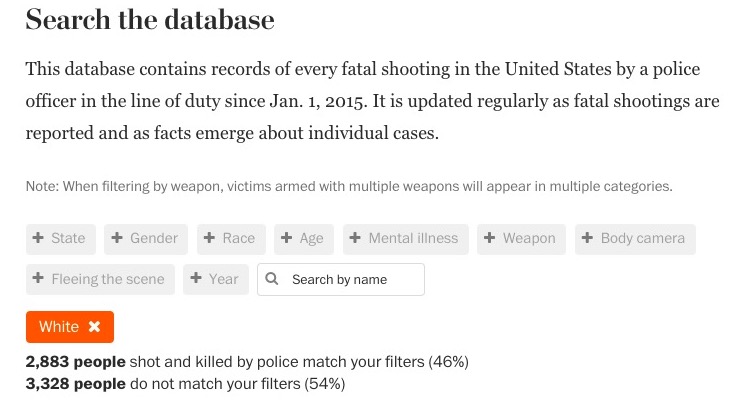 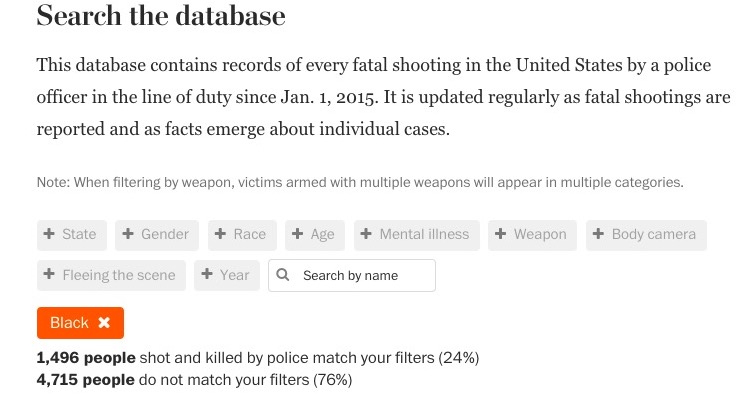 Now, the argument is that there are innocent black men who are being killed for doing X “while black”. LeBron James had tweeted after the awful death of Ahmaud Arbery, “We’re literally hunted EVERYDAY/EVERYTIME we step foot outside the comfort of our homes!”

Ok, so we can’t exactly search the database for people just going about their lives, so let’s take a look at males who are unarmed and not fleeing. There are 197 of those. 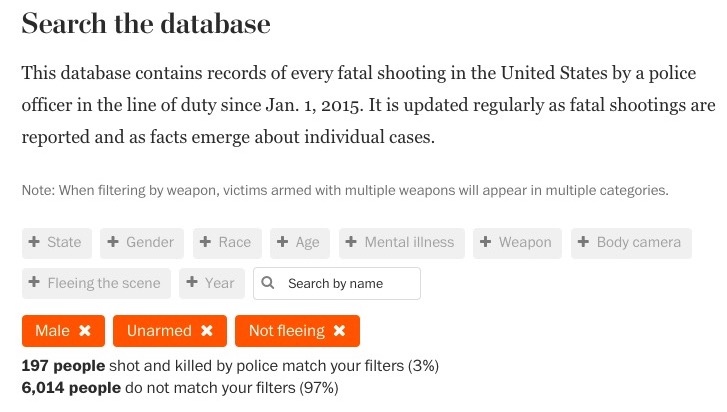 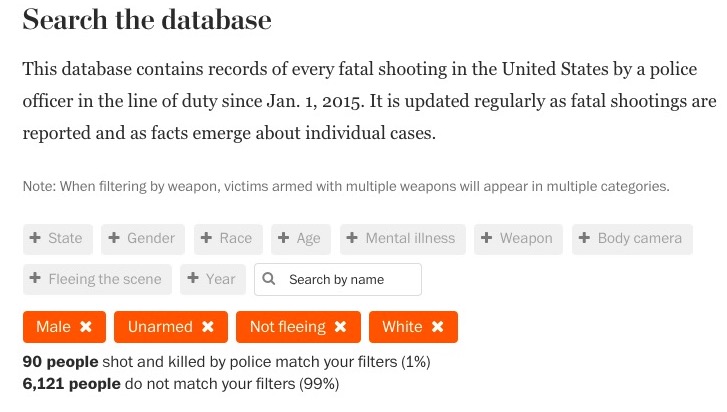 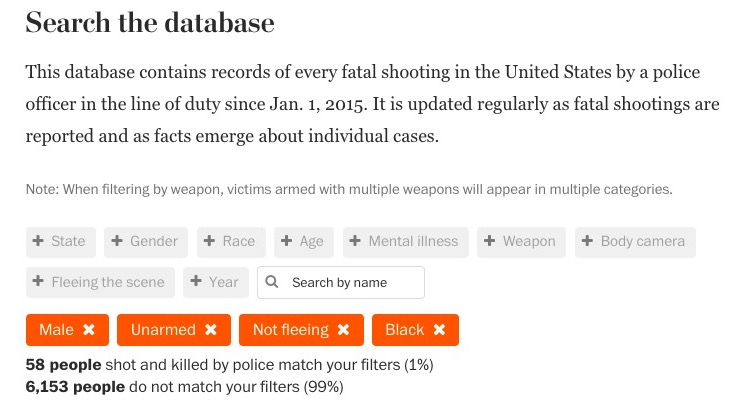 Now, let’s look at it year by year using those same categories.

In 2020, there were 23 police-involved shootings that match the parameters. Of those, 7 were black, but 12 were white. 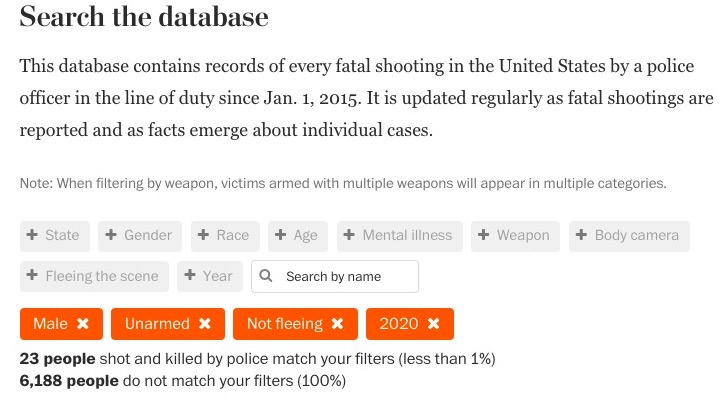 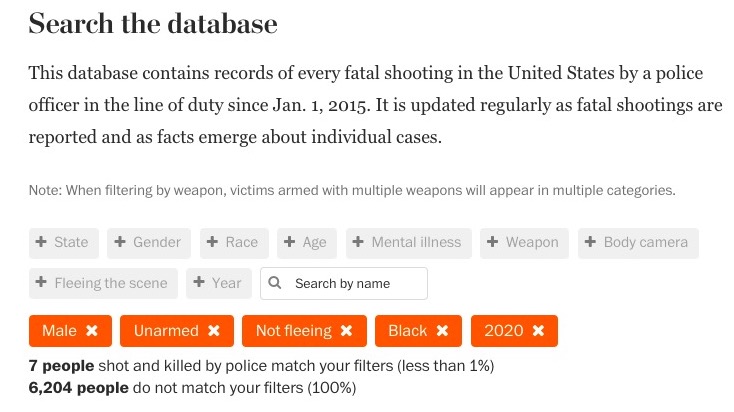 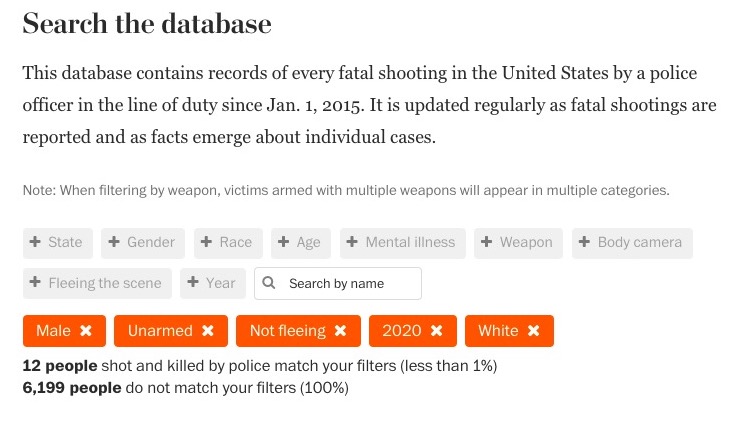 According to the data, unarmed white men not fleeing the scene are killed at a higher rate than unarmed black men not fleeing the scene except for 2015 where 20 black men were shot and killed while 19 white men were killed. Now, remember, I’m just using these criteria because of the claim that innocent black men are being targeted because of their race. If you play around with the filters, you’ll see similar results in almost every category.

Here is a chart that I made that shows the visual. 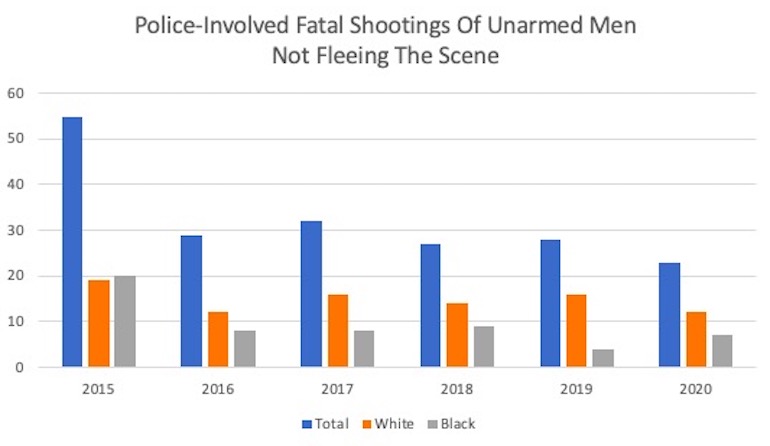 I’ll break it down here so you can see the actual numbers:

Now, I am well aware that the argument is that the number per capita is disproportionately higher for black men because they are more likely to interact with police despite being in the minority. I am also well aware that it is considered racist to point out that there is a real problem with crime in black communities, and that it is widely believed that poverty is a direct result of slavery and racism.

I’ll let the incomparable Thomas Sowell, who is much smarter than I am, address this.

Geez, no wonder the race-grifters don’t like that guy!

What’s interesting is that even the Washington Post admits that the number of police-involved shootings has remained steady throughout the years that they have been tracking. In a country of 330,000,000 people, there are approximately 1,000 police-involved fatalities in a given year and there’s very little variation. Whare is that in the reporting? 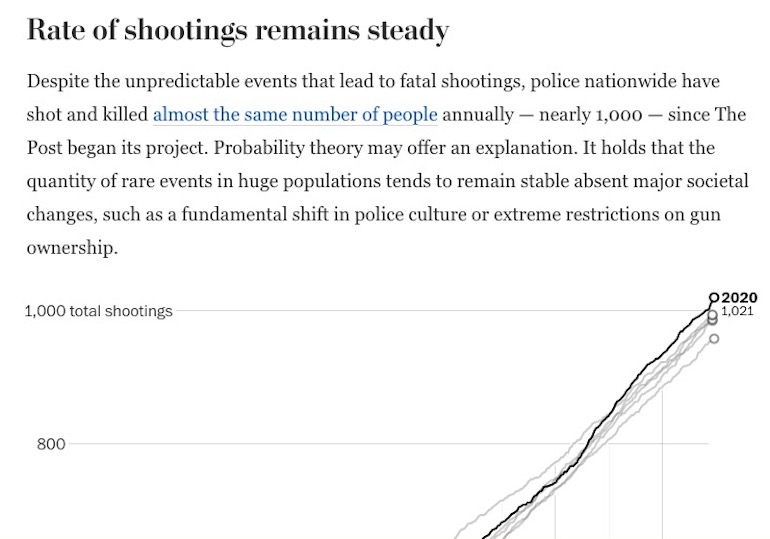 This is the media’s fault for not correcting this idea that “systemic racism” in police forces is causing the “disproportionate” deaths of black men. There was literally the same number of people killed (17) between May 25 and June 8, 2020, during the George Floyd riots as unarmed black men killed by police in 2020. And there were more people killed in the riots after June 8.

A similar database, The Officer Down Memorial Page, catalogs the number of police officers who have died in the line of duty. (This includes natural causes, by the way.)

They died while protecting the rest of us.

Shouldn’t they be remembered? Shouldn’t people “say their names”?

You can chalk it up to confirmation bias or cognitive dissonance, or perhaps they just don’t want to be wrong about a perceived injustice.

But the defund/dismantle/abolish the police movement is based on this data and the Corporate Media isn’t doing a damned thing to correct it. They know where they can get the data. They’re not neutral. They’re picking a side. It’s deliberate. Over here from the cheap seats, it looks like the side that they’re taking is against law and order and one that is actively pushing racial division.

Is this the sort of world Martin Luther King Jr. dreamed of? I don’t think he would have wanted a distortion of data to promote a “defund the police” movement that will make black communities less safe. Many residents of black communities want more policing, not less.

But you can count on the Corporate Media to continue to push the agenda that they want no matter what the consequences. After all, “fear sells,” right?