So-called ‘sanctuary cites’ have openly flouted the law of the land, welcoming illegal immigrants to act with impunity while actively hampering law enforcement from upholding the law.

One State tried to stop this practice, sending a bill through both houses at the state level, but the bill was stone dead once it was vetoed by that state’s Democrat governor.

That was then. Now they have a Republican governor, and the bill has gone up for his signature again. This time, it has been signed.

Congrats to Montana for drawing this line in the sand, creating a law that cannot be easily ignored by pro-illegal immigration activists.

The bill, HB200, passed the Senate on March 15 and has now been signed into law. The legislation prohibits local jurisdictions from adopting sanctuary policies and penalizes jurisdictions if they choose not to comply. Similar legislation was previously vetoed by former Democratic Gov. Steve Bullock in 2019.

“We are a nation of laws, and immigration laws will be enforced in Montana. Criminal, illegal aliens who pose public safety threats to our communities have no sanctuary in Montana,” Gianforte told the Daily Caller before signing the bill.

What makes this one promising is that it actually has teeth. There is a consequence for failure to comply in the one language that all politicians seem able to understand. MONEY. 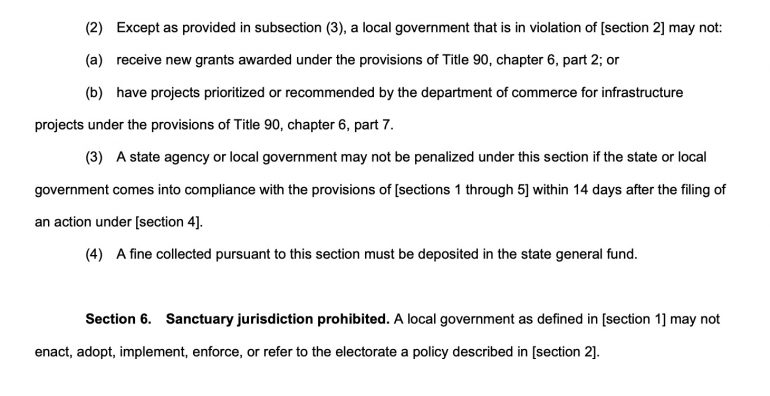 Not only will the state fine any town or city failing to comply — in 5 day increments — they are also missing out on new funding from the State.

Does your state have any laws like these on the books?

Give your local elected politicians some feedback and let them know you’re thinking about them.