You’d think that a person whose job it is to study human nature would have a little more self-awareness.

On Sunday, April 4, Jason Sudeikis won the award for Outstanding Performance by a Male Actor in a Comedy Series for his role as Ted Lasso in the Apple TV series of the same name.

I’ll be frank here — I have not seen Ted Lasso. Although a show about soccer isn’t exactly my speed, the clash of cultures aspect does intrigue me. The trailer at least, makes it look like it would be fairly entertaining if this kind of thing is your cup of tea…

If a 3-minute trailer can be trusted, Sudeikis seems to have nailed his character and really got into his head. That’s the job of an actor, but doing it well is accomplished by a good actor.

Interestingly, being able to examine a character and determine his motivations, actions, reactions, and think like him doesn’t seem to translate into being able to do the same with yourself.

Sudeikis, who made a name for himself by wearing hoodies on awards shows this year, decided to make a statement with the shirt he wore for the Screen Actors’ Guild awards. He, like so many other actors, decided to place his politics front and center.

Showing up in style! Jason Sudeikis has made statements with his sweatshirts this awards season, but for the 2021 SAG Awards on Sunday, April 4, the Ted Lasso star switched things up a bit.

Instead of opting for a tie-dye tracksuit, hoodie or even a suit and tie, he decided to get dressed up in a sweater — and one with a social justice saying to boot.

As he accepted the SAG Award for Male Actor in a Comedy Series, he gave viewers a glimpse at his sweater, which had “My Body My Choice” written in white…

…Thankfully Stylish did some digging and it turns out that while Sudeikis didn’t go for a black tie getup, he still rocked designer for the occasion.

His navy wool sweater cost a pretty penny — it’s a $1,100 top from Gucci that was designed to champion “support of reproductive rights.” The blue wool top features ribbed-knit cuffs and hem. 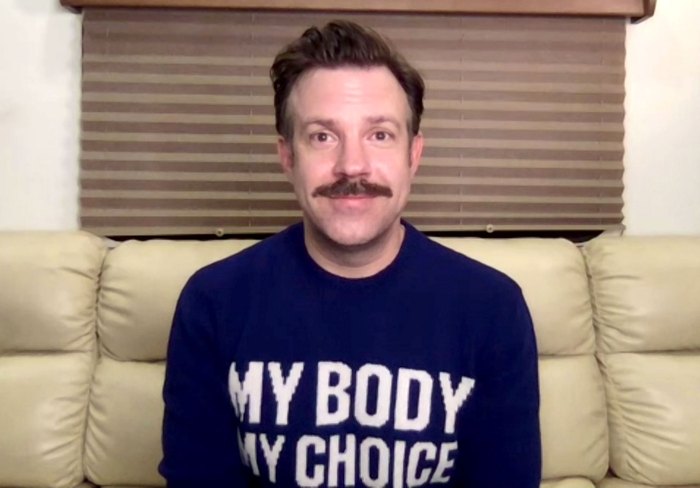 It’s so stunning and so brave for Sudeikis to come out and agree with pretty much all of Hollywood on the slaughter of the pre-born. He’s pushing his politics while wearing an overpriced designer sweater. Great move, normal guy from Kansas City.

The Great Moment In Leftist Double-Think came when Sudeikis — while wearing the $1,100 pro-abortion “My Body, My Choice” shirt by Gucci — began his acceptance speech by thanking…his mother. Sudeikis was grateful that his mom, Kathy, took him to the theatre when he was growing up. He then thanked his father, Dan, for taking him to the movies. He’s so grateful to have loving, supportive parents…and he said that while wearing a pro-abortion sweater.

This level of double-think couldn’t be scripted, it could only happen in real life.  And it did.

SUDEIKIS: Oh, boy! Man oh man — are you kidding me? Uh, Wow. Thank you to all my fellow actors. I want to thank my mom for bringing me to plays and musicals in Kansas City. Every touring company that came through, whether Phantom of the Opera or La Cage aux Folles. Uh, I want to thank my dad for taking me to go see movies. He took me to see Beverley Hills Cop when I was 9 years old and I knew at that point I wanted to be a black from Detroit. I’m gettin’ there. And again, I thank my fellow castmates because they make me better because I just — again have to keep up. Thank you. Again. It’s very amazing. Appreciate it.

He’s totally unaware, isn’t he? Absolutely blissfully ignorant of his shirt not matching his words.

Good work, comedy actor, for not even realizing that you’re promoting the value of a loving, supportive family while wearing a shirt that says children are expendable.

It’s truly something to behold.

And Hollywood actors wonder why we don’t take them seriously.

Dear Hollyweird: Here’s a message for you about what normal people think of your politics… 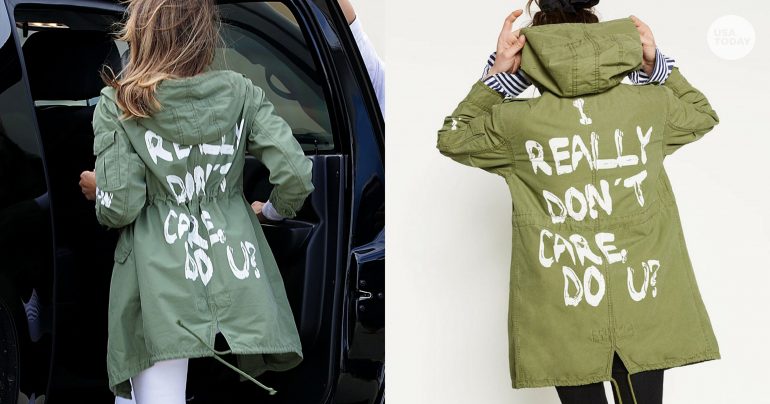