Woke Baseball is moving the All-Star Game from a majority-black city to a majority-white city because they bought the “Jim Crow 2.0” lie. Great work MLB!

The way that the lies about the Georgia Election law have infected corporations who are now virtue signaling is just astounding. Not a damned one of them stopped to actually learn what the law said.

Perhaps the worst offender in the virtue-signaling has got to be Major League Baseball.

They’ve decided to move the much-anticipated 2021 All-Star Game from Atlanta, Georgia to Denver, Colorado to appease the woke masses who are railing against the allegedly racist, somehow “oppressive” election reform measures passed by the Georgia state legislature.

As the editorial staff at National Review pointed out, MLB doesn’t even seem to know why they oppose Georgia’s “Election Integrity Act 2021” — MLB hasn’t said what specifically that they object to other than the parroted mealy-mouth generalizations that were pushed as talking points by partisan activist Democrats like Stacey Abrams and their lapdogs in the corporate media.

If MLB is suddenly passionate about the intricacies of the nation’s voting laws, it could have provided one specific alleged outrage in Georgia that caused it to make this move. Was it the newly extended voting hours? The decision to keep drop boxes permanently after their adoption on an emergency basis last year, only not at permanent pandemic levels? The requirement that voters write a driver’s license number or other identifier on absentee-ballot envelopes (when Ohio, the state where the last All-Star Game was played, has a similar rule)? The prohibition on people giving water within 150 feet of a polling station to people standing in line, although drinks can be given to poll workers to distribute and water stations made generally available?

What is particularly interesting is that MLB, in an appeal to oppose a “racist” law, has moved the game from Atlanta, 51% black to Colorado, which is is 9% black.

BREAKING: Coors Field is expected to host the 2021 All Star Game! pic.twitter.com/OW5yzDj1tq

America’s “national pastime” is now depriving black-owned businesses in Atlanta and environs revenue after a helluva year with pandemic lockdowns and rioting following the death of George Floyd.

It turns out that Colorado also has some rather “restrictive” rules for voting if the new law in Georgia can be considered “restrictive.”

Democrats and their corporate allies are lying about Georgia’s new voting law.

And they’re conveniently ignoring blue states, like Colorado and Delaware, that have even stricter voting regulations. pic.twitter.com/Rra0CJ0pJb

This image was floating around on social media with a quick debunking of the most common lies spread about the Georgia election bill. 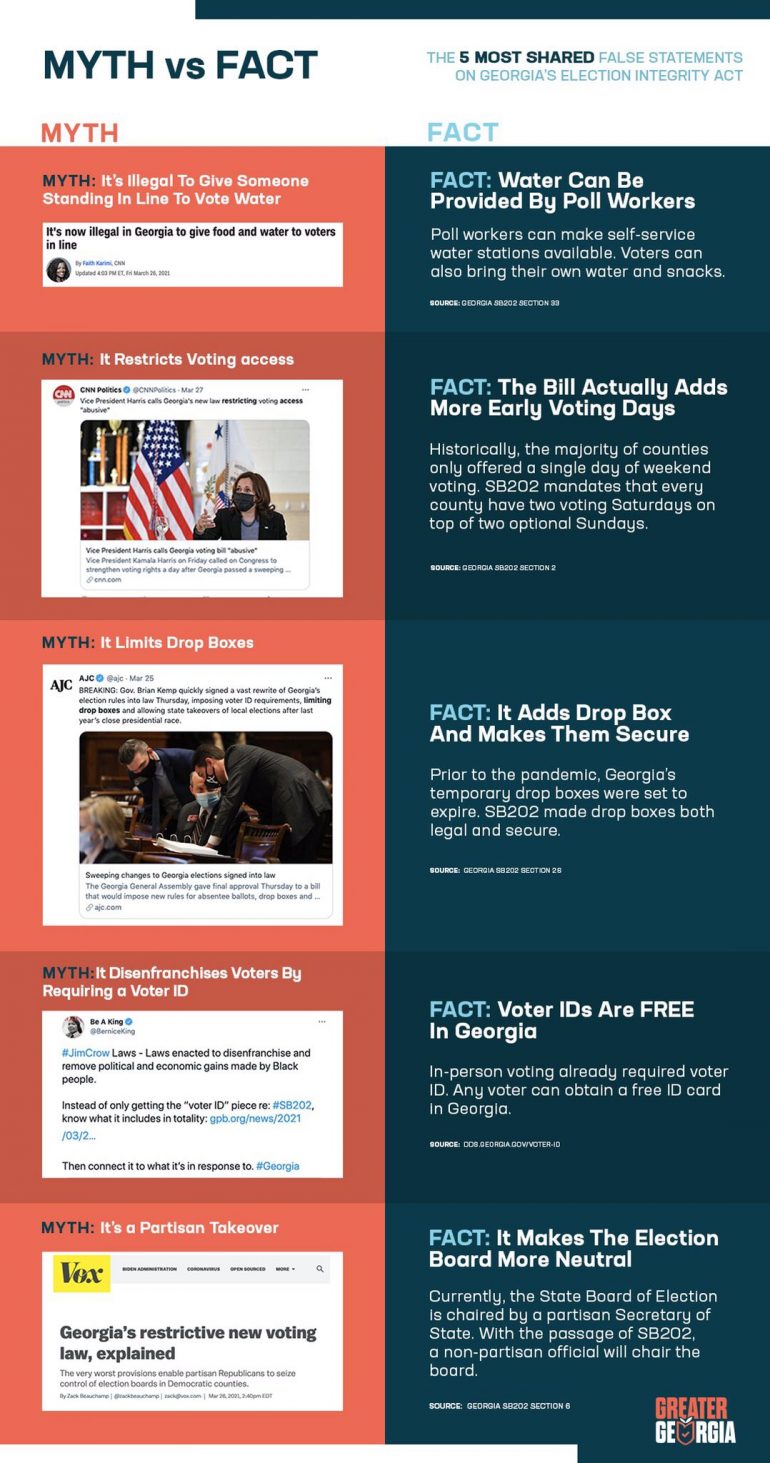 So the difference between Jim Crow on steroids and not Jim Crow at all is 2 days @MLB pic.twitter.com/RI4lxkQcKF

MLB is moving the allstar game to Colorado, which requires photo ID to vote in person, requires signature verification for mail in ballots (which Georgia got rid of), and prevents campaign workers from giving food/water to voters within 100 ft if they’re wearing campaign apparel pic.twitter.com/HwYByz0ye3

Colorado: Voter ID, 15 days of early voting, Poll times from 7:00 am-7:00 pm, signature verification required on absentee ballots, use of drop boxes, prevents electioneering by campaign workers in the form of giving food or water to voters within 100 feet of a polling station.

Georgia: Voter ID, 17 days of early voting, Poll times from 7:00 am-7:00 pm, signature verification not required for absentee ballots — alternatives like a driver’s license number can be used instead, use of drop boxes, prevents electioneering by campaign workers in the form of giving food or water to voters within 150 feet of a polling station.

Admittedly, Colorado sends out ballots to all registered voters, which is used by the majority of Coloradans, and that is something that isn’t being done in Georgia.

Of course, it’s also not done in New York where the MLB is headquartered…are they going to boycott New York next?

The muckety-mucks over at Major League Baseball are a bunch of hypocrites.

You wont get audited this year BUT don’t cheat!
May 14th, 2021 The Joe Messina Show