[Editor’s note: Reading this on a mobile device? Did you know that moving to the next ClashDaily story is a simple as swiping to the right or left?]

To federal Dems, it’s only ‘evil’ when they can blame the other side for it. And with a corrupted media and big tech shielding them from criticism, why worry about allegations of hypocrisy?

There are two lessons that can be learned here by the political right. See if you can spot them.

Bonus: That lesson shows us how to do more than talk, but how to take action in a way that even Nancy has to listen.

Maxine Waters said something outrageous, even by the low bar of her ‘standards’ which interfered with a criminal trial. Even the judge said that her words disrespected the independence of the judicial branch, and constituted a breach of her oath of office. By his own statement, if the jury convicts Chauvin, Maxine’s words alone might be grounds for him to appeal.

Outrage, demanding that Nancy do something about it. 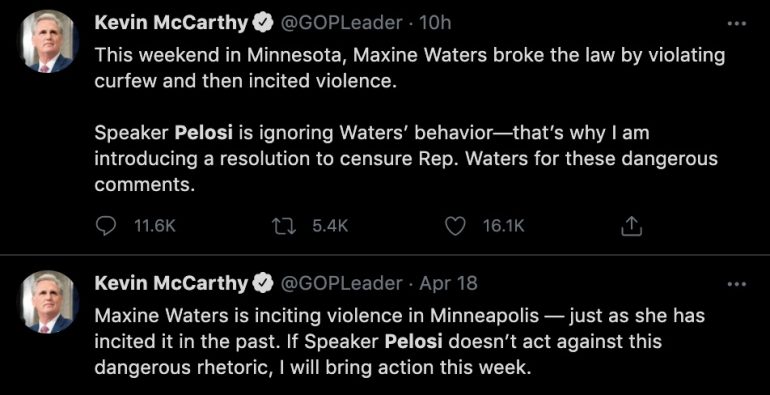 News flash, Republicans. She has no intention of ‘doing something’.

Does anyone think that being called a ‘hypocrite’ moves the needle for someone who has shown, this year more than ever, that she only cares about the bare-knuckled exercise of political power, mandated and public opinion be damned? Especially when she’s got the media and big tech working as leg-breakers to destroy her opponents?

She has only one consideration. Who’s going to stop her? If the answer is ‘nobody’ then why should she care?

The same woman who dramatically clutched her pearls about what a grave threat Trump posed to the democratic process because he used the word ‘fight’ STILL has this on her personal Twitter bio:

Her actions have given us reason enough to believe that everything she says is to achieve a political agenda, and nothing she says should be taken at face value.

This is a recurring pattern. (If you hadn’t noticed.)

Two years ago, a Republican said something that had racial overtones, and the Republican Congressman, whose remarks they were, joined with the voting against himself in censuring himself and removing himself from any committee appointments.

Just a few weeks later, when some explicitly anti-Jewish statements were made by Ilhan Omar, Pelosi refused to censure her or put any consequence at all on Ilhan, instead giving a vague message denouncing racism in a general and generic sense, not the specific comments of the Democrat at the heart of the controversy.

This year, Pelosi used her power and majority in the targeting of a Republican congresswoman, Marjorie Taylor Greene, for social media statements that had been made long before she ever ran for office, over beliefs she no longer holds, and over which she has made public statements.

MTG was stripped of any committee duties, etc.

We now find ourselves in a position where a sitting congresswoman from a party that has been telling us all to obey draconian stay-at-home orders crossed state lines so that she could break a curfew, use her position to interfere with or intimidate participants in a criminal trial, and encourage a city that was already committing acts of criminal violence to become more confrontational.

Later that same night, someone shot one of the National Guard troops trying to keep order.

But Pelosi will stand defiantly in defense of the indefensible. The only thing to which she would respond is something that would threaten her political power. 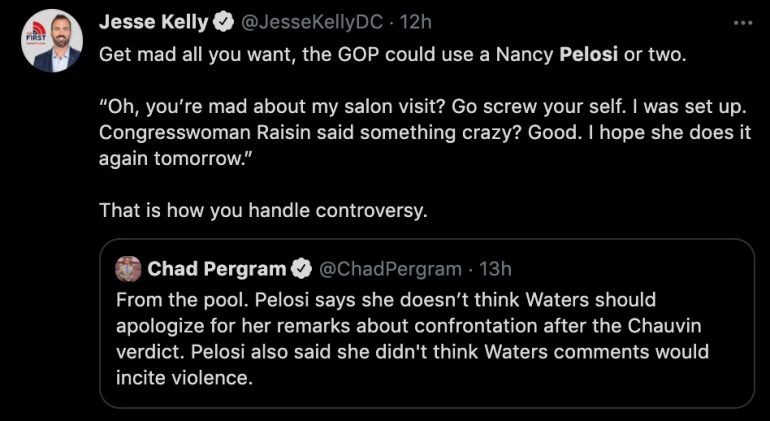 That’s actually one of the lessons to be learned by the GOP. Congress isn’t about being polite and civil.

This has been an exercise in raw political power. Look at what they have the audacity to be pushing through when they have the slimmest of possible majorities in the House and literally NO majority in the Senate, save what they have because of the vice-presidential tiebreaker.

They punish their enemies and cheat them every possible way they can. (Even in the first impeachment trial, they cheated Republicans out of rights the minority should have had, and kept exculpatory testimony from being released.)

They reward their friends, and protect them, even when they don’t deserve protection, because they care more about the big agenda wins and crushing their enemies. No wonder they let Nadler, Schiff, and Swalwell get away with their corrupt stupidity and reward it by putting them in positions of influence. They play dirty, sure, but they push the Dem agenda forward.

But let one Republican tweet gets some negative press, and RINOs start running for the exits, looking for a reporter to whom they can denounce its author.

Don’t give the Democrats an inch.

Wait a minute… didn’t we have someone who already did that? And gutless RINOs like Romney and Flake couldn’t wait to throw him to the wolves… for the greater good, of course.

To recap, the rules of the game they are playing, whether we like it or not:

This gives us our side an opportunity… if we don’t blow it.

We have the words of a judge calling her out for her actions as contrary to her oath of office. She broke a curfew to do it, at a time when Democrats are trying to get people to comply with stay-at-home orders.

We have some political power of our own — if we are willing to exercise it. We can withhold quorum until this issue gets addressed. If Pelosi fails to penalize Maxine for breaking the law and encouraging others to do the same, we should insist on a new leadership vote, since she has lost confidence.

This would be a great opportunity for moderate Dems to take back a position of influence in their own party. They could be offered opportunity to help set a moderate agenda that properly represents the balanced will of parties with political parity, not the iron fist of one woman with an enormous lust for power.