This is bad news for anyone hoping the latest conflict between Israel and Hamas would be swiftly and easily resolved.

Hamas has stepped up their attacks over the border and has incurred Israeli casualties. On the other side, some of the top intelligence brass of Hamas has been killed in a strike.

Here are some of the most recent updates from IDF. 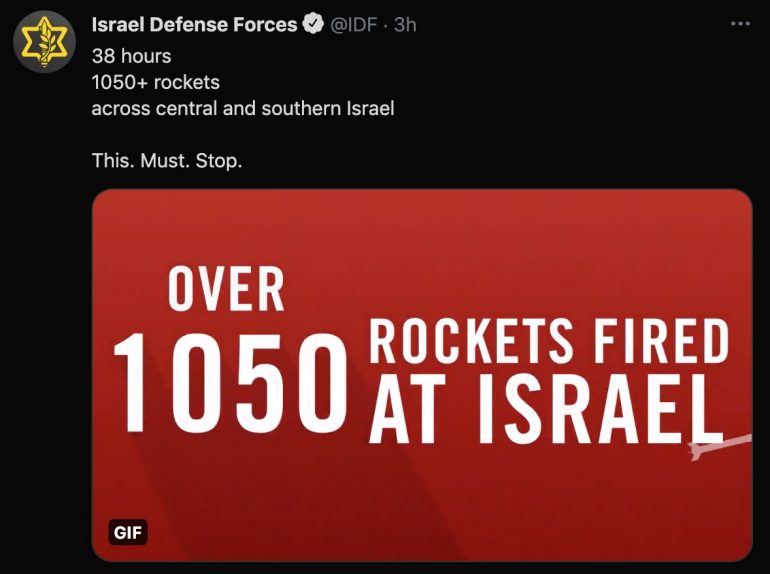 Both soldiers and civilians are among the dead in the most recent attacks.

Hamas fired a Kornet anti-tank guided missile (ATGM) towards vehicles near the southern Israeli community of Netiv Ha’Asara on Wednesday morning, after a night of intensive rocket barrages towards the center of the country.

…A Kornet anti-tank guided missile (ATGMs) was fired towards a jeep shortly after the warning was lifted, severely wounding those inside. One of the wounded has since died, Magen David Adom Director-General Eli Bin told Army Radio. The terror group then fired mortars in an attempt to prevent the wounded from being evacuated.

…Over 850 rockets crossed into Israeli territory after being launched from Gaza, and another 200 fell inside the Hamas-run coastal enclave. Several rockets have made direct hits on buildings and cars in Israel, killing five Israelis.
Two of those killed were Khalil Awad, 52, and his daughter Nadin, 16, Arab-Israeli residents of a town near Lod, who were killed after a rocket scored a direct hit on a car in Lod early Wednesday morning. — JersualemPost

The escalation ramped up on both sides. Here was Israel’s response to Hamas.

“Yesterday and today, the IDF attacked hundreds of Hamas and Islamic Jihad terrorist targets in the Gaza Strip,” Netanyahu said in a statement to reporters. “We have eliminated dozens of terrorists, including senior commanders.”

One of the top leaders killed in Israel’s strikes Tuesday was Fathi Faik Sharir, commander of the Hamas anti-tank missile unit, IDF announced earlier in the day. — FoxNews

It’s all well and good for Biden’s administration to call for both sides to show restraint, but let’s not forget where these rockets are coming from.

Ordinary Iranians on social media are saying this is how our money is being wasted as the regime ruling #Iran continues to fund Hamas’ rockets and missiles.pic.twitter.com/KTJVCyPqwl

That’s right. Joe’s BFF in Iran are providing the firepower that is fuelling this crisis.

And HOW did both Hamas and Iran get the money to play these games?

Joe gave it to them.

Direct hit on an Israeli-Arab home in Lod. Two seriously injured, one of them in critical condition. https://t.co/CT3RGcq213

What else do they have dreamed up?

Is Joe ready to kick John Kerry to the curb and realize their old way of doing things has accomplished absolutely nothing for a very, VERY long time?

Or his he hellbent on proving Robert Gates right?

We ARE talking about the one guy in the room who voted AGAINST shooting Osama Bin Laden in the face when the opportunity presented itself.

Biden’s tough talk is nothing more than made-for-TV trash-talking. When the chips are down, he can’t deliver.

Black Father Slams Illinois Schools for ‘Teachings Kids How to Hate Each Other’ with Critical Race Theory
June 19th, 2021 Flag And Cross