If cyber-bullying is prohibited on social media platforms, then why hasn’t Chrissy Teigen been banned for repeatedly violating their terms of service?

Simple — she’s one of the “pretty people” and she’s married to John Legend. It doesn’t seem to matter that she’s written some very disturbing things about children and cyberbullied teens wishing that they’d kill themselves. She still gets a free pass.

Candace Owens blasts Hollywood for protecting “predators” like Teigen and lumps her in with Harvey Weinstein and Jeffrey Epstein for her decade of “publicly victimizing women.”

On Friday, Owens tweeted, “People wonder how people like Harvey Weinstein & Epstein were able to victimize people for years despite the fact that ‘everybody knew’. It’s the same reason Chrissy Teigen has been platformed despite publicly victimizing women for over a decade. Hollywood protects predators.” Owens added the hashtag #SurvivingChrissyTeigen in reference to the “Surviving R. Kelly” docuseries exposing allegations of abuse of women.

This followed Owens’s Instagram Live video on Thursday about the appalling way that Chrissy Teigen’s “mental derangement is funny.”

Here’s what Owens wrote along with the Instagram live video:

How does any corporation in the world sponsor or deal with a woman who tells TEENAGERS that she fantasizes about them being dead?
@chrissyteigen told a 16 year old that they should commit suicide.

How is she not beyond cancelled by now?

She is a deranged human being who should be wiped from the internet by Facebook/Twitter standards.

You can watch the full video here.

Owens continues to demand that corporate partnerships with Teigen discontinue because of her extremely disturbing behavior harassing children.

Rather than answer the question as to why they are allowing child predator Chrissy Teigen a platform, @vrbo is limiting their comments on Instagram.

This corporate partnership is unacceptable. https://t.co/nYvSrRCEL8

Chrissy Teigen’s pattern is she finds young, vulnerable women who are struggling in the public eye and she sets out to destroy them for no reason other than they appear weak. #SurvivingChrissyTeigen

#SurvivingChrissyTeigen should be a documentary.

Insane how many celebrities have quietly reached out to me thanking me staying on this story.

She has been a media-sanctioned predator for a long time. https://t.co/0razVt681Y

Everything about Chrissy Teigen’s record on social media indicates mental derangement but telling a 16 year old girl that you fantasize about her being dead?

That takes the cake.

Why does @Target sponsor this trash? pic.twitter.com/PjWy4E4zIz

Owens is right. Teigen should have been “cancelled” last year when her disturbing “joke” tweets about children were unearthed. She was so worried about being a victim of the “cancel culture mob” that she eggs on that back in July 2020 she deleted over 60,000 tweets and blocked over 1 million people on Twitter.

Apparently, she didn’t delete enough of them. They’re still turning up.

ClashDaily reported on Target pulling Teigen’s cookware line right about the time that it was revealed that she had been cyberbullying then-16-year-old Courtney Stodden, who recently revealed that she realized she was “groomed” to be a child bride when she married 50-year old actor Doug Hutchison in 2011.

Did Cancel Culture Boomerang, Hitting A Hollywood Elitist In The Wallet Or Nah?

The timing, it turns out, was coincidental, but it raises the question…why should Chrissy Teigen benefit from any sponsorships after admitting that she was an “attention-seeking troll” that would harass teens on social media?

It wasn’t just public tweets, either. In an interview with The Daily Beast that brought Teigen’s bullying to light, Stodden said, “She wouldn’t just publicly tweet about wanting me to take ‘a dirt nap’ but would privately DM me and tell me to kill myself. Things like, ‘I can’t wait for you to die.’”

Michelle Carter was convicted of manslaughter after urging her boyfriend to kill himself via text messages and he followed through. Why does Teigen get a pass? Because she’s “joking”? A combination of public and private messages to a teen wishing them dead appears to be a classic case of “cyberbullying” but not if you’re married to John Legend, apparently.

Teigen has recently publicly apologized to the now 23-year-old Stodden in a series of tweets. 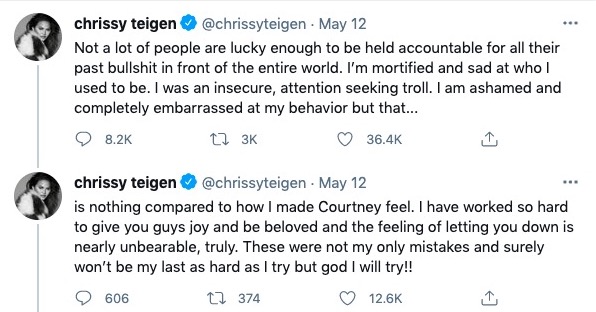 Yeah…no. That’s not how Teigen views cancel culture. Back in 2019, she urged her millions of Instagram followers to cancel their Equinox & SoulCycle Memberships because of a Trump fundraiser.

She should be banned from social media platforms because it’s part of her shameless self-promotion, and not that she’s not a very nice person, she actively urged teens to kill themselves. She is also an advocate for “cancel culture” so it’s only right that she should be held to her own standard.

Just look at a few of her now-deleted tweets.

Here’s what she said about the show “America’s Next Top Model.” 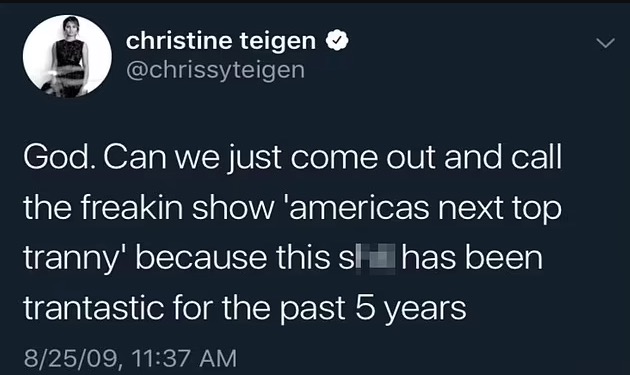 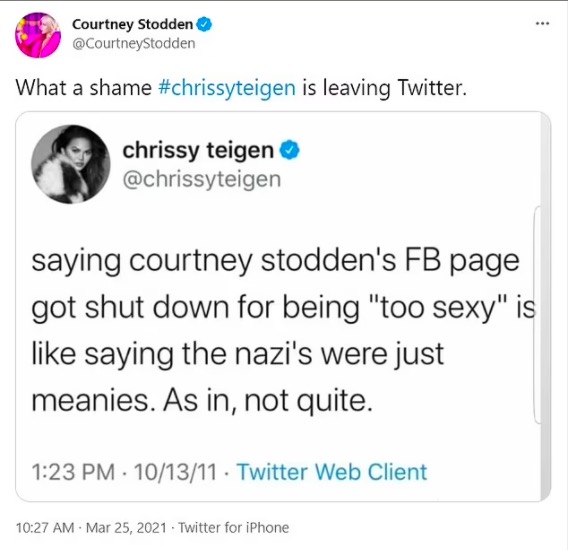 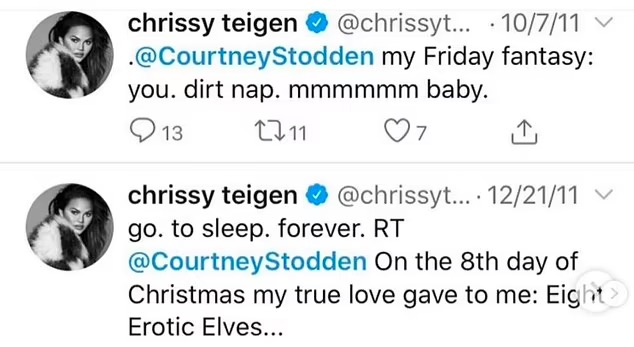 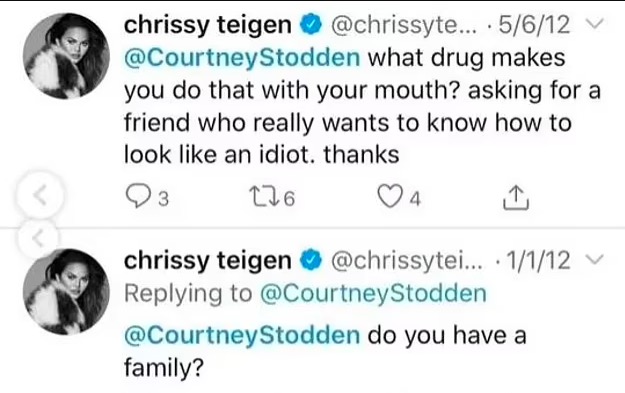 The thing is, Teigen is also a snowflake who has admitted to requiring medication for her mental health issues. She even wanted President Trump to pay her medical bills because she had to go on stronger medication (or something) because she just couldn’t handle that he was President.

Perhaps some time away from the limelight would do her some good. It would do the rest of us some good, that’s for sure!