This is just insane.

A journalist for Rebel News in Canada received two tickets totaling $1440 over the weekend for reporting on anti-lockdown protests.

Efron Monsanto heads out with a camera on the weekends and talks to the dozen or so protesters in downtown Hamilton, Ontario, a city just south of Toronto located at the tip of Lake Ontario and about an hour and a half drive away from Buffalo, New York.

He says that he continues to report on the anti-lockdown protests because the Corporate Media in Canada won’t, and the government is financially intimidating people for protesting. That sounds news-y.

The reason I keep going back is simple: the reaction from government agents — in this case Hamilton police and municipal bylaw enforcement officers — is completely insane. It’s generally a small showing of just under a dozen attendees, and every week they are financially intimidated — detained and ticketed, forced to go through the legal process of fighting back against these unjust fines handed out for protesting.

This week was different, however. The protesters made it a point to socially distance, an attempt to prevent any sort of rationale for the revenue agents and their armed enforcers to resort to handing out $880 tickets to everyone in sight. Sadly, this didn’t matter, and it is very clear what the intentions are for ticketing peaceful demonstrators. It’s pure intimidation.
Source: Rebel News

Monsanto has been ticketed before at these anti-lockdown protests. Just one week earlier, he was handed an $880 fine for reporting on the protest.

This time, he was given two tickets for the same thing — shaking hands with a protester.

That’s literally what the citation was for.

TWO TICKETS for a total of $1440 for simplying reporting on a Freedom Rally.

They actually said it was for “shaking hands” with one of the attendees. This is the third week of attempted intimidation. I will never back down.

They are being malicious ticketing twice for the same offense. I’ll be back to show our viewers the otherside of the story. pic.twitter.com/qlwqSLzpJq

On the same weekend, around a thousand pro-Palestinian protesters gathered in Hamilton chanting the genocidal “from the river to the sea” chant and the police didn’t use the same intimidation tactics as they do every weekend with the anti-lockdown protests. (Gee, why the double standard?)

Ontario has been doing the Lockdown Hokey Pokey for the better part of a year, but the last six weeks have been the most restrictive yet. The April 8 provincial “Stay at Home” was modified on April 16 and gave police sweeping powers to question why people were outside of their homes. Only “essential” businesses are open and many products are not available to purchase in-store, but are available for curbside pickup. Schools are closed for in-person learning, and gatherings are limited to members of your own household. Some jurisdictions have mandated mask-wearing outdoors.

The Financial Times has an interactive map showing the lockdown restrictions around the world throughout the pandemic. The following chart shows that as of May 18, 2021, Canada is one of the most restricted places in the world. 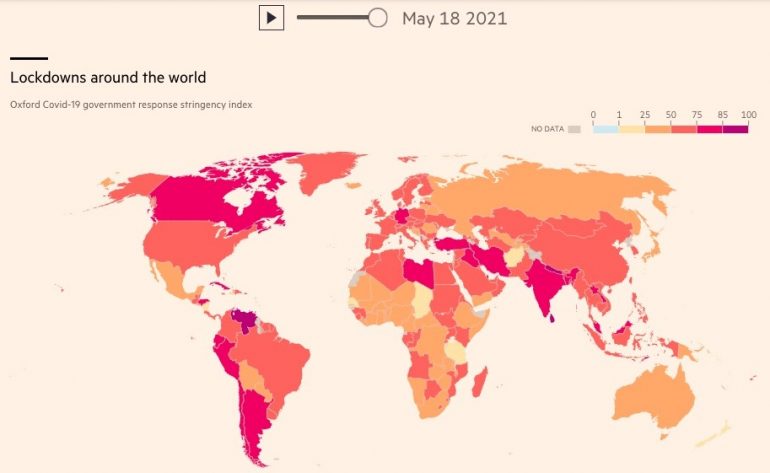 Some Canadians (far too few) have had enough of the lockdowns, but because of bungled vaccine acquisition by the Trudeau government and the poor early roll-out of the limited doses available by the Ontario government, the restrictions are continuing. There are medical “experts” in Ontario pushing for the complete elimination of the Wuhan Virus, which is an unbelievable stance.

The Ontario government’s “Roadmap to Reopening” indicates that restrictions could be extended throughout the summer unless vaccination rates hit between 70-80%. Some people want the province reopened so badly that they want officials to “round up” people who haven’t been vaccinated.

Remember, Canada’s vaccine supply was so bad, they extended the time between first and second dose to up to four months and medical experts have been pushing the idea through the state-funded media that mixing doses from different manufacturers of experimental mRNA vaccines is “rooted in Science™.”

No wonder people are pushing back in Ontario.

But the government is pushing back using financial intimidation and now they’re targeting journalists for reporting on it.

What the hell happened, Canada?!