Media types and the usual suspects on the left were ‘big mad’ about Israel’s airstrike on a building in which the international press had offices. But were they right to be angry?

A building in Gaza was knocked down as part of the ongoing reprisal by Israeli forces against a massive barrage of rockets being fired at civilian targets. Israel’s ‘Iron Dome’ defenses have done a great job knocking many of the rockets out of the air, but like anything else in life, 100% certainty is not guaranteed.

AP, among others, was pretty upset about that attack, as you can see from this screenshot of their tweet. 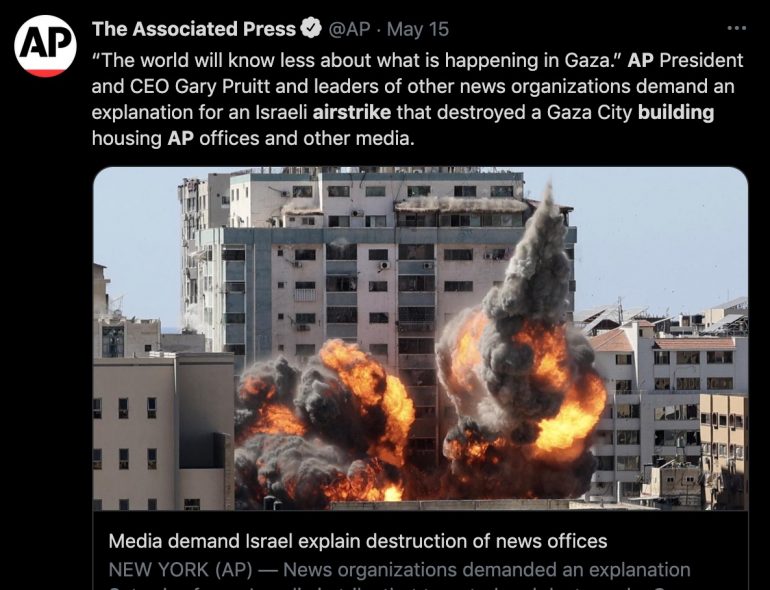 How do they justify calling themselves reporters if they are blind to what’s happening under their own noses? Other tenants of that building knew what was really going on there.

Why did the AP (and anyone else there) continue using a building where a terrorist organization was using the press as human shields?

Joe Biden was brought up to speed on what was going on.

Israel shared intelligence with the US showing how Hamas operated inside the same building with the Associated Press and Al-Jazeera in Gaza, officials in Jerusalem said on Sunday.
Officials in more than one government office confirmed that US President Joe Biden’s phone call to Prime Minister Benjamin Netanyahu on Saturday was, in part, about the bombing of the building, and that Israel showed Biden and American officials the intelligence behind the action.
“We showed them the smoking gun proving Hamas worked out of that building,” a senior diplomatic source said. “I understand they found the explanation satisfactory.”
Prime Minister Benjamin Netanyahu confirmed the source’s remark, when asked about The Jerusalem Post’s reporting in an interview with US TV show Face the Nation.
“We share all the intelligence with our American friends,” he said. “The intelligence we had is about an intelligence office for [Hamas] housed in that building that plots and organizes terrorist attacks on Israeli civilians. It is a perfectly legit target.”
Netanyahu also remarked that there were “no deaths whatsoever” from the strike on the building, because of measures Israel takes to avoid harming civilians, including giving an advance warning. —JPost

Netanyahu even took time to use small words so that even journalists can understand why Israel are wearing the white hats in this conflict, and Hamas is, well, the criminal terrorist group that most of the world agrees they are.

The building they knocked down was used by Hamas as an intelligence office for the Palestinian terrorist organization used to plot and carry out attacks against Israeli civilians.

Israeli PM Benjamin Netanyahu schools CBS on the targeting of the shared facility between the media and Hamas. "We, unlike Hamas, take special precaution to tell people to leave the premise, and we make sure everyone is gone before we take down those buildings." pic.twitter.com/LjA5BRnodW

Imagine a news service sharing a building with a major satellite office for the Kremlin, where all the tenants know what was going on, but the media claims to be in the dark?

The fact that nobody died in that attack because they were given advanced warning should tell you everything you need to know about who the good guys are in this conflict.

For the full context’s sake, you can find the full transcript of the interview here.