Don’t you want to fork over $76,000 per year to have your kid lectured by their university why they probably shouldn’t be called a “Freshman” in their first year?

The “Woke” Language Police are really working overtime to make everyone change their racist speech. Sometimes, they’re even categorizing things as “problematic” that just aren’t a problem at all.

Brandeis University, a private institution just outside of Boston and ranked #42 among U.S. universities, has recently put out a list of “oppressive language” that should be avoided because they can hurt people’s feelings. The list is curated and maintained by “students who have been impacted by violence or who have worked with others who are healing from violence, as well as students who have sought out advanced training for intervening in potentially violent situations.”

Brandeis makes it clear that the list isn’t mandated, but it’s a “tool” to “share information” to those unfortunate ignorant souls who continue to use these words and phrases without recognizing the harm that they are doing by inviting a friend for a “picnic” lunch.

The website states, “This list is meant to be a tool to share information and suggestions about potentially oppressive language. Use of the suggested alternatives is not a university expectation, requirement or reflection of policy.”

The “Oppressive Language List” is divided into five categories:

First up, the elimination of all figurative language. Sorry, poets. You’re done.

Oh, and don’t try using a “trigger warning” — that just invokes the imagery of guns, and well, that’s just not ok, apparently. 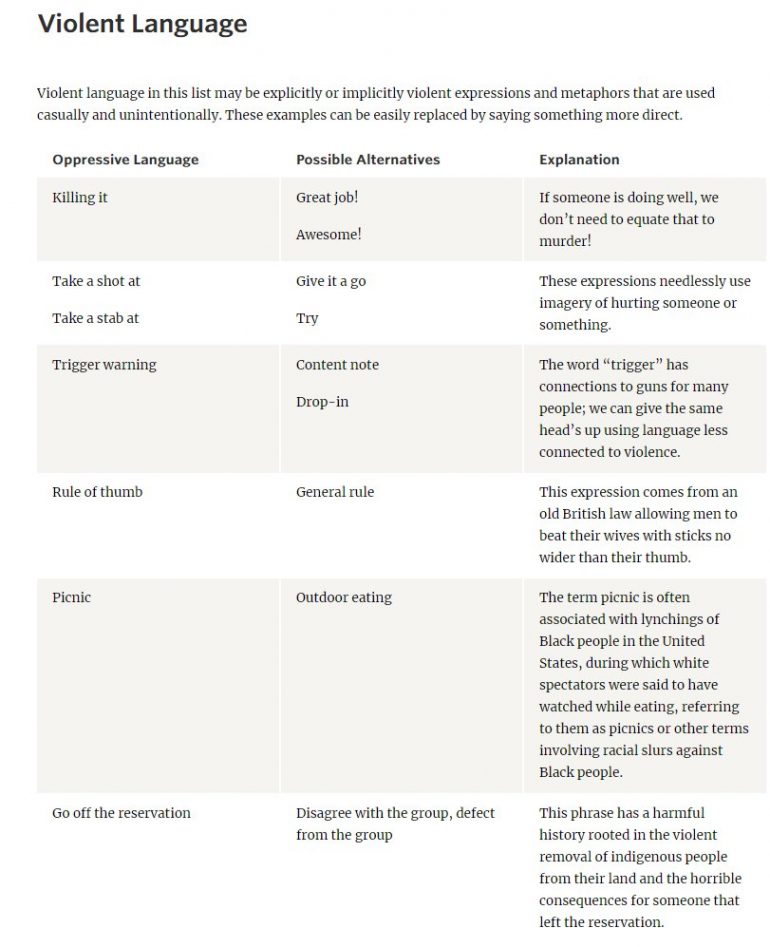 Note that the word “picnic” has been removed after novelist Joyce Carol Oates mocked Brandeis for their list and noting that the word “lynching” itself was not included.

The “rule of thumb” entry is based on a commonly-held misconception about the phrase which was actually just about a form of measurement and not about wife-beating.

The lists just get more and more bizarre with words like “victim” and “survivor” getting the boot in favor of the much wordier, “person who has experienced…” or “person who has been impacted by…”

Also on the chopping block for cancellation is the slang, “you guys” which was a staple in my high school days. 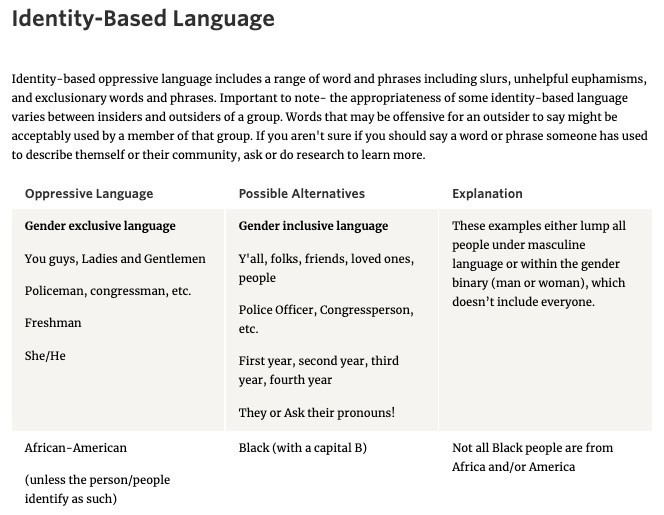 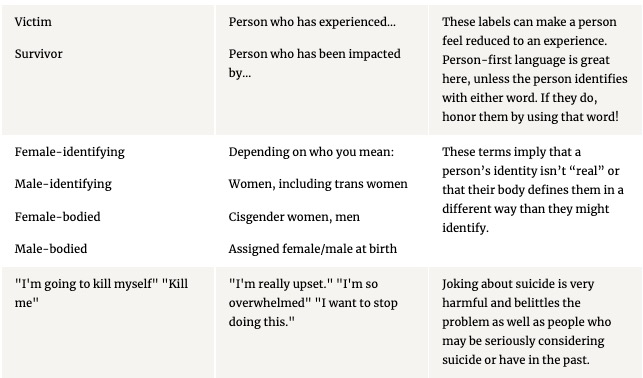 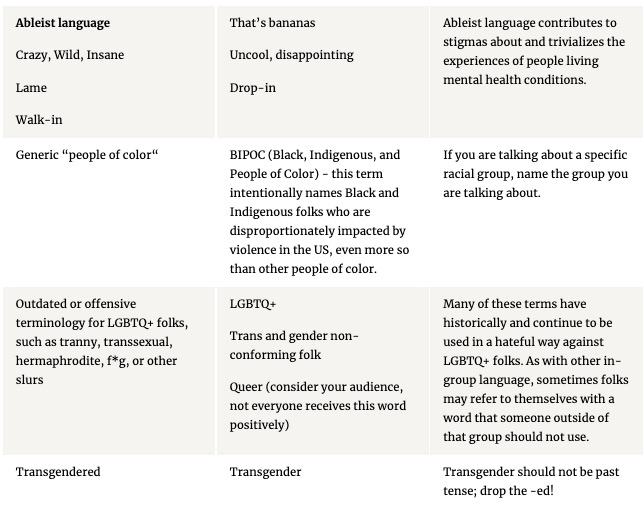 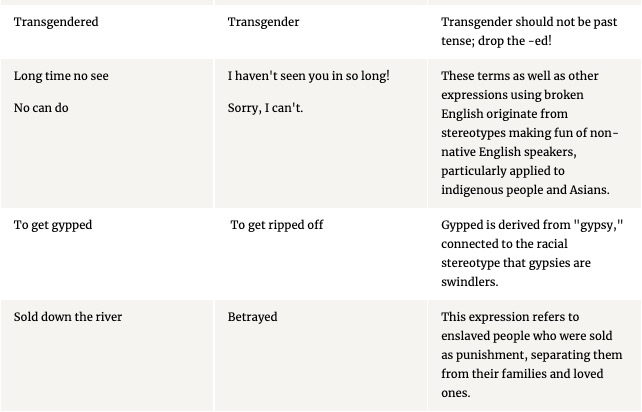 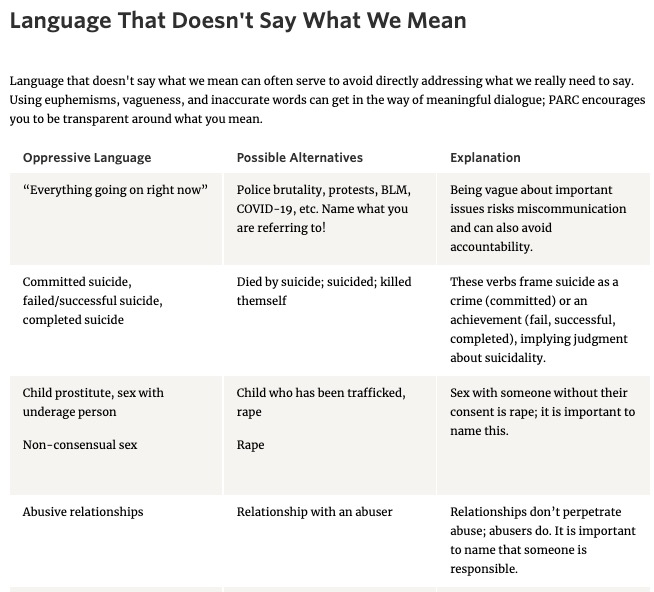 My favorite one, however, is the suggested term for “homeless person” — you should use “person experiencing housing insecurity.” Really? Housing “insecurity”? That actually seems cold and dehumanizing to me. This isn’t just about a shelter from the elements, here. There’s something different between just a place to put your head and a home. It hits a bit harder when you realize that people have nowhere to call their own home. 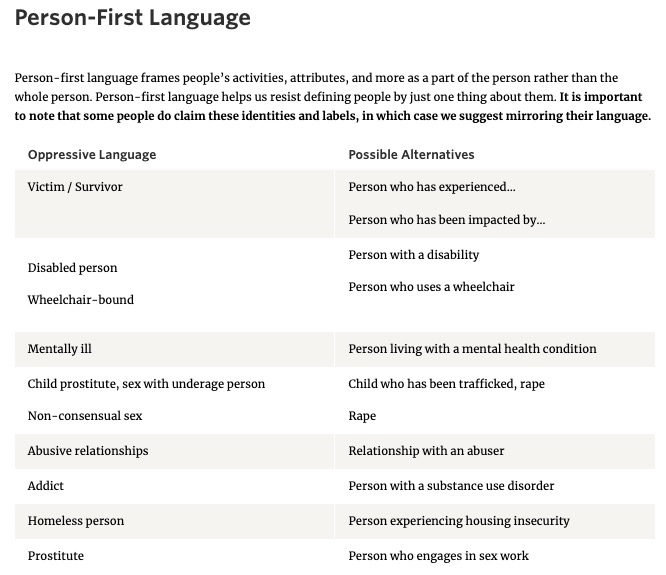 It’s quite the scheme that these universities have made for themselves. They’ve been marketed as the only way to secure a good, decent future, but it costs a small fortune to attend and you’re loaded with debt when you get out — unless you’re one of the lucky ones who have the cash on hand to pay for it. It would be quite the summer job to rake in the $76K needed every year for tuition…and if you could manage that, then what the heck is the point in going to university?

The thing is, now that everyone and their dog needs a degree to do just about anything, they’re also more about indoctrination into leftism than education for employment.

It’s past time for us to find an alternative to the corrupt college and university system that just sucks money away from people and leaves those who don’t have it in debt. That doesn’t mean “free college” is a good idea. It isn’t. It’s already outrageously expensive because the government backs loans that are risky. Can you imagine how much it would cost if they could just suck right off of the government teat while keeping their endowments? You can just bet that the cost would go up exponentially, and taxpayers will be footing the bill. And that, as they say, is “bananas.”