Merrick Garland will not ever sit on the Supreme Court. We now know exactly what kind of a bullet we dodged because of that decision.

When Eric Holder was Obama’s AG, he called himself Obama’s ‘wingman’. The media (and other Democrats) never batted an eye at that moniker, yet they were very upset when they accused Bill Barr of being nothing more than an extension of Trump’s will.

With a Democrat back in the Oval Office, they’ve all gone back to not objecting to an AG that carries out the Partisan politics of his President.

Merrick Garland has made it very clear that he does not approve of States auditing the elections. (Not that it’s any of his damned business.) He has gone farther still. He has made vague threats against anyone doing a recount, that the Feds will be breathing down their necks, looking for any sign of wrongdoing on which they can pounce.

The current recount is being held in Arizona, and the AG there took that threat personally. He fired back with a notice of his own in an open letter written directly to the former future Supreme Court Justice Merrick Garland.

He did more than that. He took his federal counterpart to school. 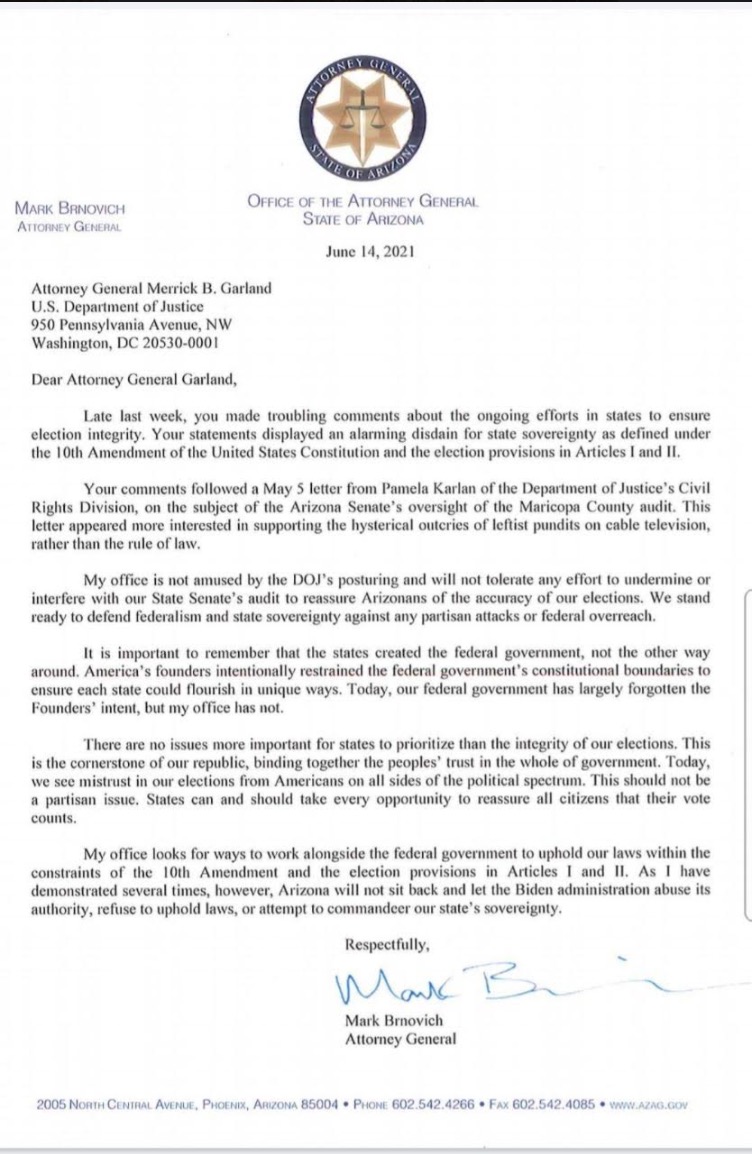 In case you are unable to read this image on your device, here is what it says:

Late last week, you made troubling comments about the ongoing efforts in states to ensure election integrity. Your statements displayed an alarming disdain for state sovereignty as defined under the 10th Amendment of the United States Constitution and the election provisions in Articles I and II.

Your comments followed a May 5 letter from Pamela Karlan of the Department of Justice’s Civil Rights Division on the subject of the Arizona Senate’s oversight of the Maricopa County audit. This letter appeared more interested in supporting the hysterical outcries of leftist pundits on cable television rather than the rule of law.

My office is not amused by the DOJ’s posturing and will not tolerate any effort to undermine or interfere with our State Senate’s audit to reassure Arizonans of the accuracy of elections. We stand ready to defend federalism and state sovereignty against partisan attacks or federal overreach.

There are no issues more important for states to prioritize than the integrity of elections. This is the cornerstone of our republics, binding together the peoples’ trust in the whole of government. Today, we see mistrust in our elections from Americans on all sides of the political spectrum. This should not be a partisan issue. States can and should take every opportunity to reassure all citizens that their vote counts.

My office looks for ways to work alongside the federal government to uphold our laws within the constraints of the 10th Amendment and the election provisions in Articles I and II. As I have demonstrated several times, however, Arizona will not sit back and let the Biden administration abuse its authority, refuse to uphold laws, or attempt to commandeer our state’s sovereignty.

They can only abuse such power as we the people PERMIT them to abuse. Every tool we have to push back can and should be used.

How serious is Arizona on this point? Here’s a clue.

You will not touch Arizona ballots or machines unless you want to spend time in an Arizona prison. Maybe you should focus on stopping terrorism. The Justice Department is one of the most corrupt institutions in the USA.https://t.co/Jl2pKNpfJR

These are the kinds of never-surrender patriots America need to see more of, taking bold stands.

Looking for inspiration? Want to be emboldened by the example of others who stood against all odds in the past, and had their names literally written in history? Look no further than this. It features the ladies but is an inspiration to all of us.