The White House should just admit it — the “Bad Orange Man” announcing his trip ahead of the “Border Czar” shamed her into finally going. We all know it’s true.

Vice President Kamala Harris going to visit the southern border is a no-win situation for her brand. Despite what Democrats say, the sharp uptick in border crossings is a direct result of the Biden-Harris administration pulling back on Trump-era border policies. They call it a more “humane” way of dealing with the thousands of illegal border crossers every month.

Unfortunately, the Biden-Harris “humane” immigration policy has incentivized violating immigration law and put many vulnerable people at risk by relying on human smuggling cartels to transport them across the border. We’ve seen the complete disregard for human life by these cartels who have pack desperate people into vans like sardines, abandoned children at the border, let people die on the journey, and are known for raping the women and girls that are crossing illegally.

Harris doesn’t want to be anywhere near it and have to look those people wearing the “Biden Let Us In” shirts in the eye and hear the horror stories that Border Control Agents will relate to her. That’s why she decided to rub elbows with the leaders in Mexico, and the Northern Triangle countries dealing with “root causes” that are impossible to mitigate rather than head to the border and admit that it’s inhumane to simply allow people to risk their lives to cross the border that is now largely controlled by cartels. It’s shameful, actually. How is it compassionate to legal immigrants?

Just a few days ago, Rep. Henry Cuellar (D-TX) had sent a letter inviting Vice President Harris to the border, but he was (essentially) ghosted.

Now that Trump announced that he was going to the border suddenly Harris has discovered that it’s urgent to see what’s going on down there.

Harris’ first official visit to the border is set for Friday, according to reports, just days before Trump visits with GOP Gov. Abbott. Harris has been heavily criticized for not visiting the southern border in the three months since being tasked with leading the White House border response by President Joe Biden.

Harris earlier this month visited Guatemala and Mexico, but her visit there came under scrutiny for her flipping to the Trump administration mantra, warning those seeking to migrate to the United States: “Do not come.”

Abbott has announced a number of border response measures in Texas, which he said will “do the work of the federal government.”

And, Republicans have long noted Biden and Harris’ refusal to go to the border is a function of them not wanting to hear the reality of what locals, law enforcement, and border agents will tell them, ostensibly: restore the Trump administration measures you had unwound since taking office.
Source: Newsmax

In a statement released by his Save America PAC, Trump took credit for the Vice President’s sudden decision to visit the Southern Border.

After months of ignoring the crisis at the Southern Border, it is great that we got Kamala Harris to finally go and see the tremendous destruction and death that they’ve created – a direct result of Biden ending my very tough but fair border policies.

If Governor Abbott and I weren’t going there next week, she would have never gone! 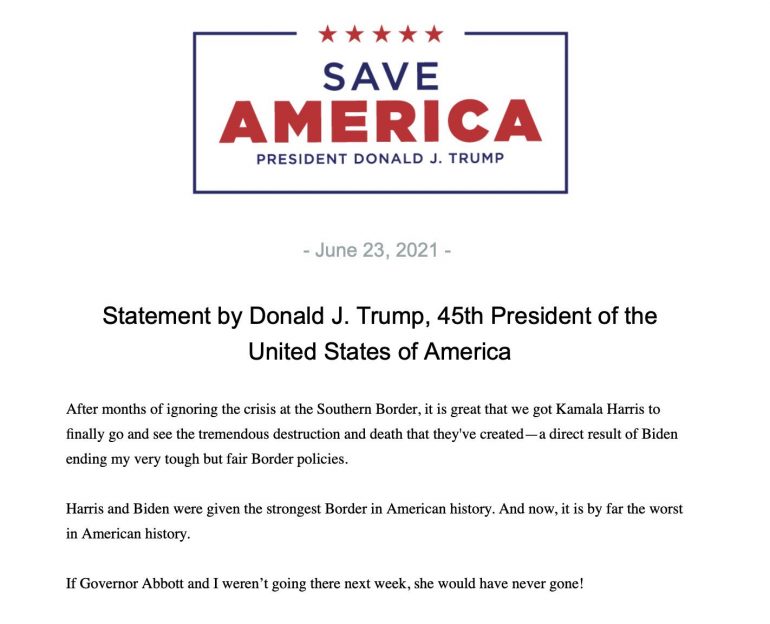 He’s probably right about that.

She was absolutely obnoxious with reporters when they would ask her if she was going to the border.

Now she has been shamed into going.

Later on Wednesday, another statement was issued. This one focusing on how awful the situation at the southern border currently is under the Biden-Harris administration.

There has never been, in our Country’s history, a Border catastrophe like what is currently taking place at our Southern Border. All Biden had to do is leave it the way it was, by far the strongest Southern Border our Country has ever had. Millions of people will now be streaming into our Country unchecked, unvetted, and unknown. Other countries are emptyinging their prisons with their worst criminals flowing itno our Country. Drugs, gangs, and fugitives are pouring in every day. Hospitals, schools communities, and police are overwhelmed. This is far more than a crisis — our Country is being destroyed! 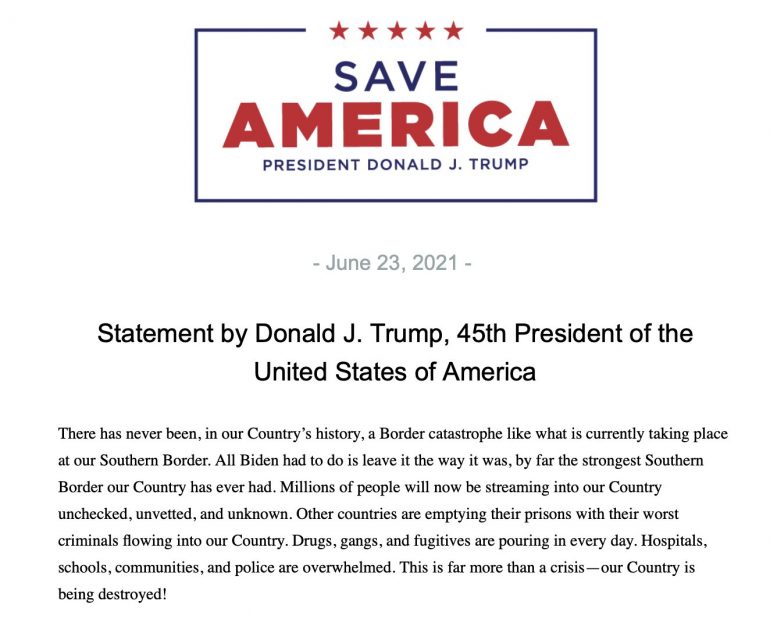