At some point, even something as simple as the law of probability itself should make a rational person ask questions… right? Are we there yet?

Our readers are pretty well informed, and many would still remember the infamous ‘tarmac meeting’. Think back.

It happened during Barack’s final year as President. Trump was emerging as the GOP leader, Hillary had run almost unopposed, and there was an open investigation into Hillary’s email.

Anyone could have told you ahead of time how that investigation was going to play out. The findings were rigged from the start, the infamous Strzok/Page texts said as much, even before Hillary had been deposed.

But for some reason, Bill Clinton found himself in an ‘unscheduled meeting’ with Loretta Lynch on an airport tarmac, in which they discussed ‘grandchildren’ away from witnesses for about 20 minutes.

As far as questions of political ‘quid pro quo’ go, there was a lot on the line in this meeting. Hillary had already promised that Lynch could keep her job if she won the Presidency, while Hillary obviously had a lot to gain if that investigation quietly ‘went away’ before November.

The Tarmac Meeting story hit headlines after it was broken by one reporter by the name of Christopher Sign.

The 45-year-old television news man who was the first to report of a secret meeting between former President Bill Clinton and then-Attorney General Loretta Lynch that was held on her private jet in 2016 has died of an apparent suicide.

Police in Hoover, Alabama, said they received a 911 call at 8:13am on Saturday of a person down at a home on Scout Trace.

First responders arrived at the home and found the body of Christopher Sign, a former University of Alabama football player and veteran broadcast journalist with Birmingham’s ABC TV affiliate WBMA-LD.

News of Sign’s death, which is being investigated by police as a suicide, was reported by AL.com. –DailyMail

Co-workers were shocked by the news, remembering that they were joking around at work only the night before. He leaves behind a widow and two young boys.

There are a couple of reasons this story seems suspicious.

First, the death threats Sign had received after breaking this story, a story which later grew to become a book.

Before returning to Alabama to become an anchor, he was a local ABC 15 TV Arizona reporter when he broke the stunning story of the tarmac meeting in June 2016.

‘We knew something had occurred that was a bit unusual. It was a planned meeting. It was not a coincidence.’ Sign told Fox and Friends in February 2020 ahead of the release of his book Secret on the Tarmac.

…Sign said his source witnessed the rendezvous unfold from the moment Clinton arrived at the airport.

‘He then sat and waited in his car with the motorcade, her airstairs come down, most of her staff gets off, he then gets on as the Secret Service and FBI are figuring out “How in the world are we supposed to handle this? What are we supposed to do?”‘ Sign told Fox.

…’My family received significant death threats shortly after breaking this story,’ he told Fox. ‘Credit cards hacked. You know, my children, we have code words. We have secret code words that they know what to do.’

He added that his work had nothing to do with right or left-wing politics, but about what is right and wrong.

In May last year, Sign told a Real Clear Investigations team: ‘To this day I have never found a single person who claims or corroborates any story that Bill Clinton played golf on this particular trip … I feel strongly the former president did not play golf on this visit.’ — DailyMail

The other reason this is suspicious would be the sheer number of people whose lives have — for whatever reason — intersected with the Clintons, only to come to an early and tragic end.

It’s happened so frequently that it even became a meme. 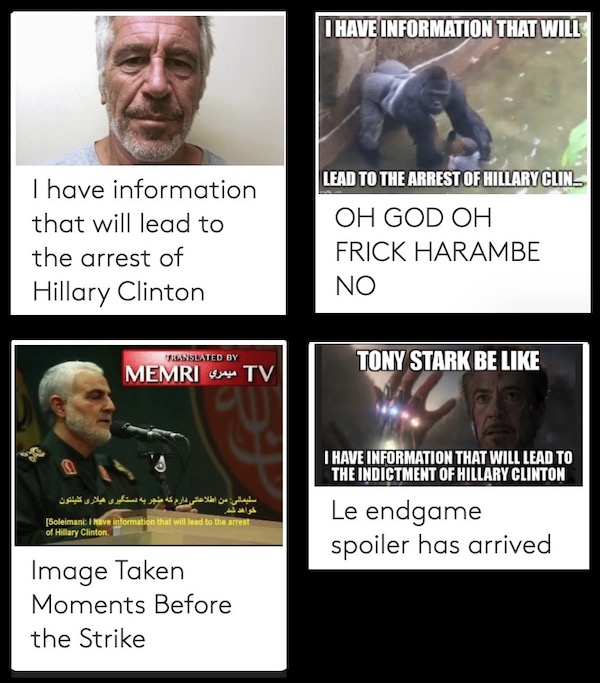 From time to time, even ClashDaily has published the list of people who have come to untimely deaths, often ruled as suicide, when they happened to have something to say that would incriminate one or both of the Clintons.

Is it possible that there are entirely reasonable explanations for each and every person on that list? Without a doubt. But the longer the list gets, the longer those odds become.

How long does a list like that need to get before the jokes about coincidences stop being funny, and start adding up to real suspicion? Even if the suspects are not the Clintons themselves, perhaps some kind of people working in the shadows to protect their larger interests?

Ask yourself: what is a reasonable number of unexplained suicides for that paradigm shift to happen? Five? Fifteen? Twenty-five?

Because even before this story came across our desk, the tally of names whose tragic and violent deaths happened at times that proved potentially advantageous to the Clintons is up over 50. For point of reference, the names and circumstances were listed here:

Clinton ‘Suicides’: You Can Add Two More Names To That List Of Suspicious Deaths

Even if forty or forty-five have perfectly innocent explanations. How many unexplained dubious ones would it take before they add up to a genuine problem?

Are we there yet? How many more would it take?