The comedian presented his thoughts on the possibility that the coronavirus originated in a Wuhan lab and rankled a few very touchy scientists…and Stephen Colbert.

Monday marked the return of The Late Show with Stephen Colbert to the Ed Sullivan Theater with a full-capacity live audience (who had to show proof of vaccination) for the first time since March 2020 and the “15 Days To Slow The Spread.”

It also marked actual humor returning to The Late Show for the first time in years.

Colbert’s guest was Jon Stewart, an executive producer of the show and former host of The Daily Show, which turned out to be Colbert’s big break.

Stewart, a vocal leftist, just says what he thinks. Colbert kicks off the interview by talking about how life has changed in the past 15 months and how he had to shift to filming from his home.

Colbert then says that early in the pandemic, Stewart had lamented how science hadn’t progressed much in handling a pandemic because the same advice for the 1918 Spanish Flu was the same as it was in 2020 — wear a mask and wash your hands.

Colbert asks, “How do you feel about the science now, though?”

Stewart responds, “I think we owe a great debt of gratitude to science. Science has, in many ways, eased the suffering of this pandemic which was more than likely caused by science.”

Colbert pushes back and asks if Stewart thinks that there’s a chance that it came from a lab and if there’s evidence, he’d like to hear it.

Colbert says that the lab could have been in Wuhan because coronavirus outbreaks occur in Wuhan. Except… the bats linked to the coronavirus lived 1000 miles away from Wuhan, there were no bats in the wet market, and the lead researcher in Wuhan, Shi Zhengli, warned about a deadly “Frankenvirus” test years ago.

Stewart says that he thinks that one day, science will kill us all.

After his appearance, some blue-check scientists on Twitter were very upset about how he was spreading a conspiracy theory.

Chief among those was American neurophysiologist and radio host Dr. Kiki Sanford, who weighed in before watching the segment. 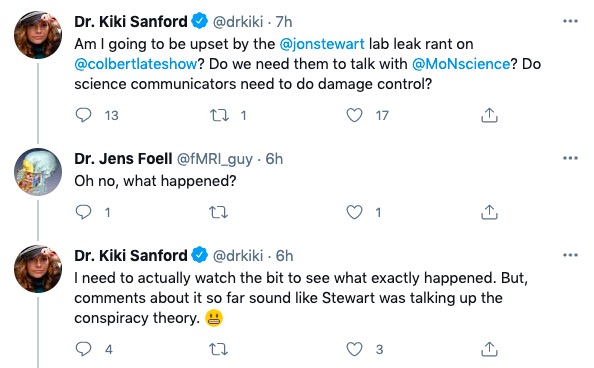 She then watched the segment and still says that he’s “promoting a conspiracy theory.” 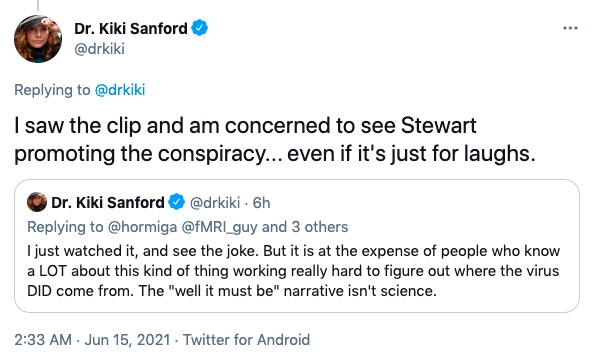 Nsika Akpan, co-creator of PBS’s ScienceScope, who was tagged by Sanford in her tweet, said that he thinks that Stewart is “satirizing both sides of the natural origins-lab leak debate.” He then says that the “lab leakers” are already cutting clips of the segment. 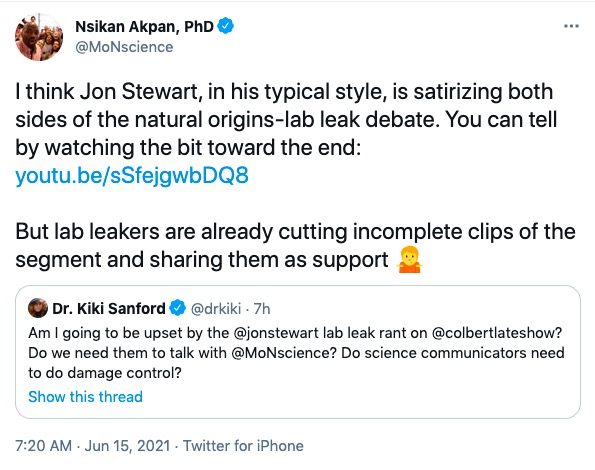 You saw both clips of Stewart’s appearance posted to YouTube by The Late Show — you decide. Was Stewart satirizing both sides? Perhaps it appears that way after watching the first clip and Colbert’s comment about the Daytona Herpes Lab, but Stewart continues discussing how scientists mess with things that they don’t quite understand.

Here’s the thing that those scientists aren’t saying — there’s no “scientific consensus” on the natural origin theory.

Back in January, evolutionary biologists and professors-in-exile, Bret Weinstein and Heather Heying, who have been examining the science behind the coronavirus, treatments, and vaccines for over a year now, appeared on Bill Maher’s show. They said that the lab-leak theory is a legitimate hypothesis and should be examined. Maher says that it’s almost a conspiracy theory to not think that the virus came from a lab.

There are some other interesting tidbits from this clip…

At the 5:08 mark, Weinstein says that there is something unusual about SARS-CoV-2 in that it can not just jump from animal to human, but it can also be passed human-to-human from the get-go. Maher responds that they have a “third trick” — the mutations of the virus and asks about variants being milder than the original virus. Heather responds by saying that you might expect a lab-leaked virus would behave differently than a wild-type virus.

Weinstein then at the 7:17 mark enumerates certain conspicuous traits to the virus:

For more information on the lab-leak theory, Vanity Fair of all places has a thorough investigative report about the possible origin of SARS-CoV-2.