You would never guess this by the left’s conspiracy of silence about all things concerning our Southern Border, but Mexico has been faced with a serious pandemic outbreak.

Mexico City tried the same approach to resolving the spread that had seen some success elsewhere. And if you notice the fatalities have been way down since peaking in late January, early February, something is working. 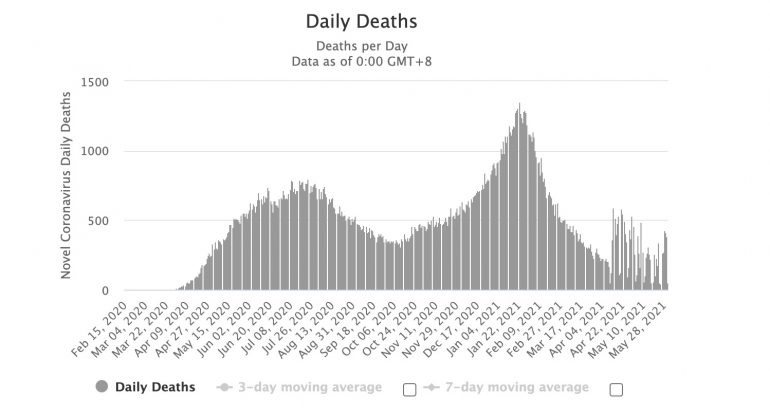 Earlier this month, as WND reported, a significant decrease in cases in India coincided with the national health ministry’s promotion of ivermectin and hydroxychloroquine treatments.

In Mexico City, after a spike in cases in December, the city’s Ministry of Health created a home-treatment kit for residents. The city’s metro population is 22 million. —WND

The home testing kit was just one tool in the toolbelt. With mass vaccinations not a viable solution to the problem they had at hand, they looked for viable treatments… and tracked their results in a massive study.

The Mexican government then began a study to track the impact of the early treatment of COVID with ivermectin on the city’s population.

The study tracked 200,000 people, dividing in two cohorts — those who received ivermectin and those who did not.

Through a phone-call-based monitoring system and hospital data on admissions for COVID-19, the researchers found a reduction of between 52% and 76% in hospitalizations for those who took ivermectin compared to those who did not.

He found that excess deaths in the city dropped sharply only a few weeks after the ivermectin treatments began. — WND

If this sounds vaguely familiar, it should.

This is the same treatment (not vaccine, but TREATMENT) that was spoken of by experts who had addressed Congress last fall. Sites like ours that actually reported on it were censored in several ways.

First, the Tech Tyrants throttled our reach, downranked us in web searches, and penalized anyone sharing articles in Facebook Groups — even if that group was our own.

After that, Google targeted our revenue by cutting us off from our advertisers, warning us that some of our articles were not in compliance. Failure to remove them would mean we would no longer have access to the revenue required to keep the site operative. (They later hammered our ad revenue anyway.)

Articles in which Medical Doctors discussed the efficacy of low-cost treatments that could (and, in this instance, DID) save lives were not deemed ‘Covid-compliant’ by the Internet overlords.

Remember way back about five minutes ago when the Left couldn’t stop saying that abortion was a medical decision ‘between a woman and her doctor’?

How exactly did we get from there to the point where some Silicon Valley fact-checker with a political ax to grind gets to limit what life-changing medical information (and studies) you do and do not get to hear about?

Should it not give us pause to realize that our ‘follow the (political) science’ so-called ‘experts’ have been proven wrong again and again through this pandemic, while so-called Third World countries who have no shiny new billion-dollar patents to produce and whose main interest is to stop stacking their relatives’ bodies like cordwood seem to have done a better job of finding actual medical solutions?

Instead of a 1/6 Commission, how about we open up a Covid-19 commission and find out why so many medically valid conversations were shoved completely out of the public square?

Are we so interested in the ‘novel’ and the Big Pharma gravy train that our experts push that to the exclusion of everything else? Were financial interests involved in any of these decisions?

With everything else heading to the courts these days, it sure would be interesting to see how many families whose deceased loved ones might have benefited from inexpensive treatment options whose existence and feasibility was deliberately suppressed feel about holding our censorious overlords to account.

Politicians and media talking heads have been so busy trying to hang every death around Republican necks that nobody’s stopped to ask how many might have died because of Big Tech’s propaganda arm.