As you read this, think about the COVID narrative we were spoon-fed for the last year and a half… and ask yourself who does and does not deserve the public’s trust.

Remember all the things that were dismissed as ‘disinformation’ by the ‘fact-checkers’, Big Tech monopolies, and the ‘scientific experts’ — literally bankrupting and silencing many of the dissenters who dared to ask the wrong political questions along the way?

Keep those people in mind as we learn about what’s in the (multiple) terrabytes of information delivered in a treasure trove to the US military intelligence by a former top operative from China.

It reads almost like the plot of a Tom Clancy Cold-War era spy novel… with even higher stakes.

Here’s a Cliff’s Notes version of the Big Idea. 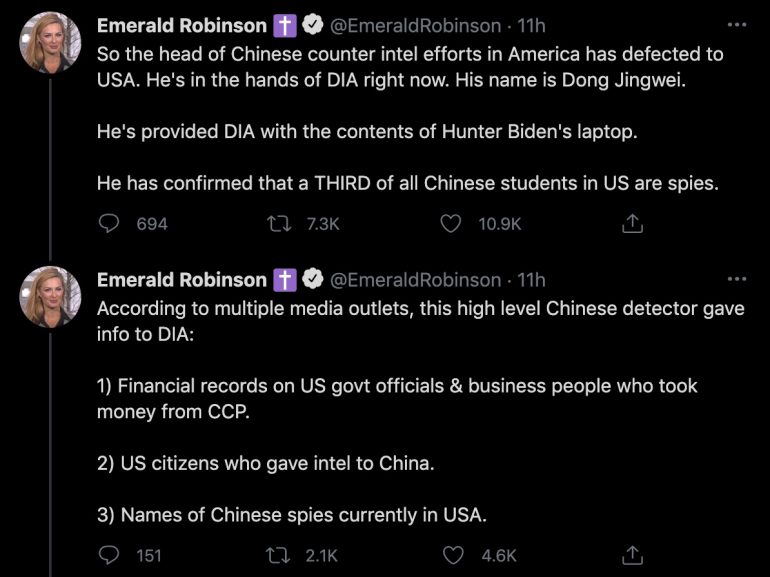 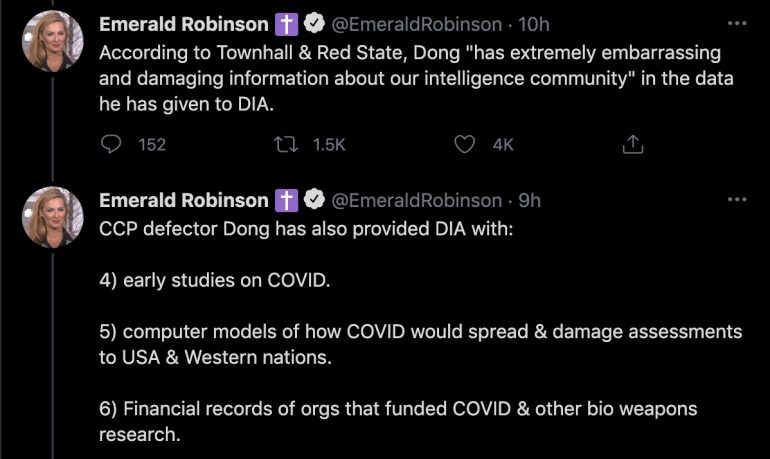 Have YOU heard the regular ‘mainstream’ news outlets in the West reporting on Dong Jingwei? Or are they only quick to pounce on stories that push a narrative that advances the Left’s causes? 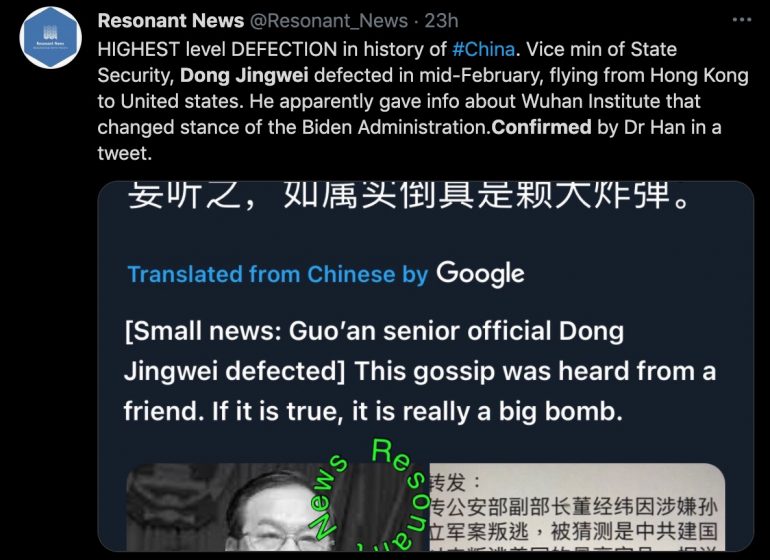 Dong Jingwei is believed to have fled to the US with his daughter Dong Yang on February 10, according to Spy Talk.

He made a name in China’s secret service, known as Guoanbu, and was head of counter-intelligence, or spy-catching, after being promoted to the post of vice minister in April 2018.

If the reports are true, Dong is the highest-level defector in the history of the People’s Republic of China. —DailyMail

He brought terrabytes of information with him. What did that include?

There’s a LOT of information with him, including — interestingly for anyone concerned about foreign powers exercising blackmail leverage against the current President — Hunter’s Biden’s Laptop.

Experts quoted in the Spy Talk piece essentially say that the defection is just a rumor and that rumors happen all the time, but that if it’s true it’s a big deal but “not game-changing.” Based on conversations with sources familiar with the information Dong has already provided and its quantity and reliability, that’s simply not the case. Not only does Dong have detailed information about China’s special weapons systems, the Chinese military’s operation of the Wuhan Institute of Virology and the origins of SARS-CoV-2, and the Chinese government’s assets and sources within the United States; Dong has extremely embarrassing and damaging information about our intelligence community and government officials in the “terabytes of data” he’s provided to the DIA. —RedState

RedState made an interesting list of bullet point about some of the information and how compromised American institutions are to Chinese influence operations. Notice the curious things this list says about COVID, including some interesting phrases like ‘models of predicted … spread and damage’, ‘S-ARS-CoV-2 and OTHER biological warfare research? Was this a bio-weapon? And just how certain can we that the release was unintended? How many of our ‘trusted experts’ who sounded an awful lot like shills for the Communist Chinese Regime were actually compromised if not outright traitorous?

In addition, Dong has provided DIA with the following information:

Early pathogenic studies of the virus we now know as SARS-CoV-2
Models of predicted COVID-19 spread and damage to the US and the world
Financial records detailing which exact organizations and governments funded the research on SARS-CoV-2 and other biological warfare research
Names of US citizens who provide intel to China
Names of Chinese spies working in the US or attending US universities
Financial records showing US businessmen and public officials who’ve received money from the Chinese government
Details of meetings US government officials had (perhaps unwittingly) with Chinese spies and members of Russia’s SVR
How the Chinese government gained access to a CIA communications system, leading to the death of dozens of Chinese people who were working with the CIA

China has cracked the CIA? Seems like a problem.

Remember how Joe Biden once laughed at the idea of China ‘eating our lunch’?

He continued, “I mean, you know, they’re not bad folks, folks. But guess what: they’re not competition for us.”

“I hear these stories about how China is going to eat our lunch. Give me a break!” he said.

A White House readout of the president’s call with Xi asserted that Biden expressed “fundamental concern” about China’s “coercive and unfair economic practices” and also spoke about the governments’ crackdown in Taiwan and human rights abuses in Xinjiang.

But Biden also agreed to work with China when it was in America’s interests. — Breitbart

While Biden was busy pretending there was no threat from China, and calling Trump’s suspicion of the CPP’s handling of the pandemic origins and the coverup of its origins in Wuhan ‘racist’, what were our supposed ‘experts’ doing?

They were running interference for the Chinese Communist Party, assuring us that any talk of a lab-leak origin was most certainly disinformation and a conspiracy theory. Strange how they never mentioned that, from the very earliest days of the outset, the likelihood of a lab leak was a consideration on the table.

Some of the scientists on a recently-revealed February 2020 phone call thought the virus that causes COVID-19 could have been engineered, Dr. Anthony Fauci, who convened the call, said in a new interview.

“It was a very productive back-and-forth conversation where some on the call felt it could possibly be an engineered virus,” Fauci, the director of the National Institute of Allergy and Infectious Diseases, told USA Today. —EpochTimes