Hardly a day goes by when we don’t have our own elected officials finger-wagging us about the dangers of white domestic terrorists, or institutional racism, or white privilege. If ‘race’ is such critical news, why was this not reported?

Media biases are revealed as much by what is NOT reported as by what IS reported. Ever since the New York Times editorial staff decided to view every story for the next couple of years through a lens of race, there has been a laser focus on bad things done by white guys to non-white people, this is being used to back up racialized policy coming from our own Federal Government where there is a threat of ‘whiteness’, and a problem of ‘systematic racism’ that requires massive government initiatives to solve.

They claim to care about hate crimes. Fortunately for us, this is a testable hypothesis. In our current heavily charged racialized news cycle, what happens when someone who is non-white has committed violent acts against strangers for explicitly racial motives?

A black man accused in a 20-hour, two-state shooting spree that wounded five strangers told cops he was motivated by race and intentionally targeted “military-looking” white men he believed wronged him, police said.

Roberts is also accused of shooting a white man in the back at a hotel in Phenix City, Alabama, the Columbus Ledger-Enquirer reported.

Detective Brandon Lockhart testified Monday that Roberts told police following his arrest that he “had to have” one victim who was shot in the back as he got into a car under the Oglethorpe Bridge in Columbus.

Ok, so we have a black man, with a grudge against white guys, who has been shooting strangers. Will the ‘hate crime’ angle of the story be pushed in this case?

We’ll have to wait and see. But this doesn’t make it look likely.

Liberal newspaper Austin @statesman says it refuses to print the description of the mass shooting suspect for ideological reasons. The at-large suspect is described by police as a slim black male with dreadlocks who wore a black shirt. pic.twitter.com/7Ec3GSdQCP

Identifying his race would be harmful in perpetuating stereotypes?

That principle should either be applied across the board to suspects of every ethnic background or not at all… especially now we are entering territory where our own government institutions have embraced the idea of equating immutable characteristics — like white skin — with negative traits like ‘privilege’, ‘oppression’, ‘unconscious racism’, or even the new pejorative with ever-shifting meaning ‘whiteness’.

That concludes the ‘news’ portion of this story. Let us now consider the implications.

The media has become curiously selective in the stories they tell. Have you heard the networks talk up the shooting and homicide stats in Chicago? The HeyJackass site (highly recommended) now has them looking like this: 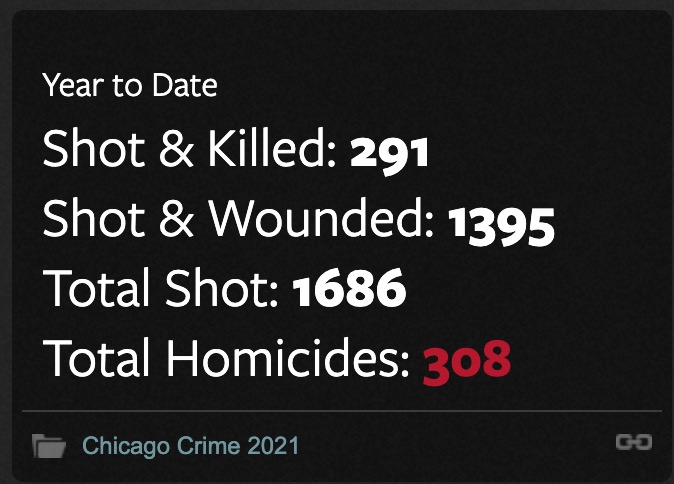 But since they mainly represent urban crime stats, don’t push any kind of a helpful narrative for either the media or the administration they aren’t deemed newsworthy. But if some random white guy commits a crime against some non-white guy, he ofte gets immediately elevated to the national headlines as a symptom of a ‘bigger problem’.

There is an obvious hazard in framing a society in terms of perpetual victim and perpetual oppressor.

It provides a moral framework where hatred of the ‘other’ is permissible, and even just.

If our own media is teaching people that you can tell the good guys from the bad guys by the color of their skin, shouldn’t we at least entertain the possibility that the ‘experts’ in academia, the government, and our media setting up the preconditions in our country for many MORE violent acts of vigiliantism like this one?

Maybe we should go back to MLK’s idea of how Americans with different skin colors should judge each other… by the content of our character.

Because we are all works in progress, whatever our epidermis looks like.