Can you still claim citizens have a right to protest when activist goons know they can descend on peaceful protests they dislike so they can intimidate protesters or get them disbanded as ‘unlawful assemblies’?

The spa in which young girls were made to endure the sight of a naked penis because trans concerns take priority over all others in the current political climate was the site of a public protest.

At issue was a dispute over whether young girls should be made to find themselves in such a vulnerable and uncomfortable situation.

The issue behind the protests, which got a lot of play in the news in recent weeks was summarized this way:

The Wi Spa has been the site of a prior protest and clashes after the viral video was uploaded several weeks ago. In the clip, a woman, who some said is African-American, is heard complaining to the Wi Spa’s staff that a biological male walked into the women’s section and exposed himself to girls. The customer reportedly identified himself as a transgender woman.

“He is a man,” the woman is heard saying. “He is not a female. There are girls down there, other women who are highly offended by what they just saw and you did nothing. You sided with him.” —EpochTimes

It was an issue in which words and ideas could — and should — be the arena where these disagreements get hammered out. But the counterprotesters had a very different agenda.

Their clash with cops was caught on video by an independent reporter on site.

Police wasted no time in dispersing the crowds. 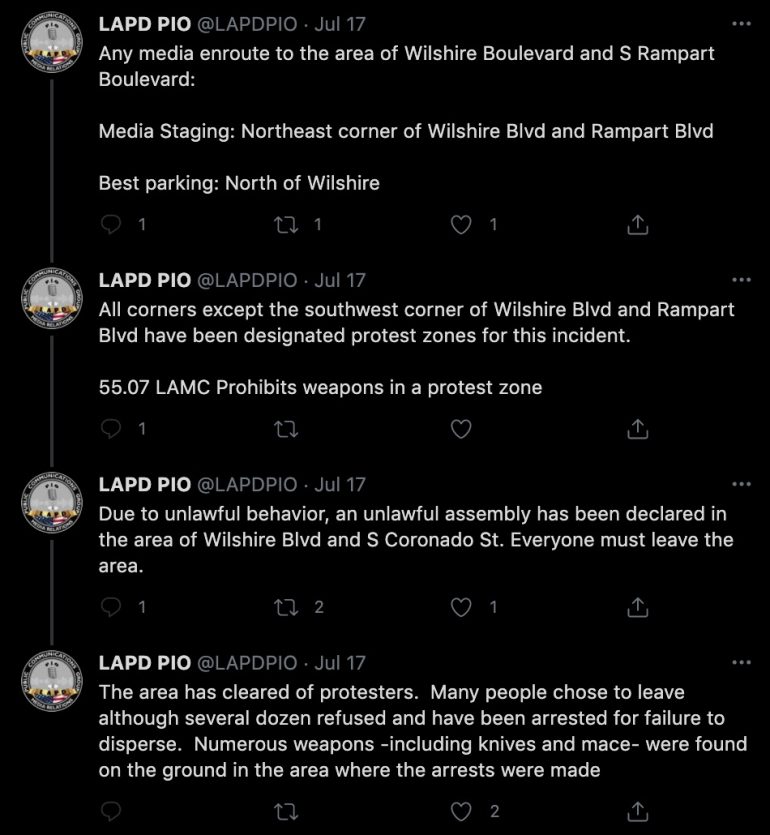 At a protest near Wilshire Bl & Rampart Bl, 2 groups clashed. Smoke bombs/projectiles were thrown at ofcrs & a dispersal order was issued. Several dozen people were arrested. Numerous items in violation of 55.07 LAMC were found discarded including a stungun, knives, pepper spray pic.twitter.com/exk7vvTfRm

At the end of the day, what are we left with?

The peaceful protesters are sent home, and the thugs dressed in black score a propaganda victory in having the police call an end to the protests of peaceful citizens.

With nobody showing any political chutzpah in defending the rights of ACTUAL peaceful protesters against the thugs who would rather to shout slogans, break windows, and crack skulls … is it any wonder they are getting bolder with every passing day?

But some guy with a MAGA hat, he’s the REAL threat to democracy. Yeah. Sure.