A biracial Harvard-educated doctor claims that she was demoted because of her views on race.

Dr. Tara Gustilo has a degree from Harvard University and graduated from the Mayo Clinic Medical School.

She has been the head of the OB/GYN department — a 32-member team — at the Hennepin Healthcare System in Minneapolis, Minnesota for the past six years. Dr. Gusilo has had excellent job performance reviews and patient satisfaction scores have gone up under her leadership.

For years, she has worked to create a “more holistic, multicultural and inclusive care environment.” A few years ago, she spearheaded an initiative to “understand the birthing traditions and needs” of patients from different cultures. She has supported the concept of “equal treatment and individual respect as a solution to racism.”

Dr. Tara Gustilo filed a discrimination complaint against Hennepin Healthcare System in June saying she was demoted for criticizing the Black Lives Matter movement on her social media page.

The complaint says that she was removed from her position despite rave job performance reviews during her six-year stint as head of a 32-person team.

‘Under my leadership, my department improved my patient satisfaction scores and connected our hospital’s diverse population with the care that they needed,’ Gustilo says in the complaint.

She received ‘one of the highest patient satisfaction ratings of all the doctors at Hennepin Healthcare and in the nation.’

Her problems began last year after the death of George Floyd and the subsequent protests. She noticed that the hospital’s focus was shifting from a standard of “multicultural care” to care segregated by race — black healthcare professionals assigned to black patients.

Dr. Gustilo is biracial and has children that are multi-racial. As the nation — and her employer — began to focus on race and protests erupted, she became concerned about the way that race was being discussed in the public sphere and how this would affect her children. 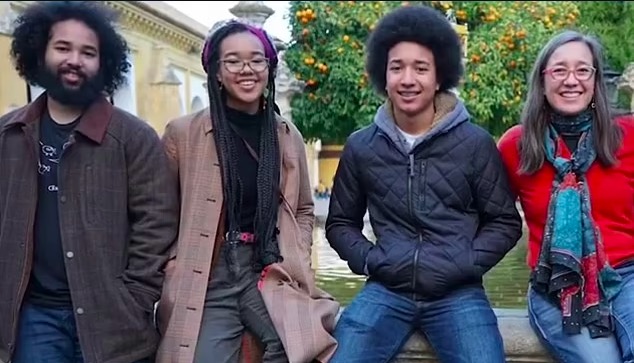 ‘Why are we not teaching that judging by immutable qualities is ridiculous,’ she wrote in one Facebook post dated September 25, 2020.

‘Instead, the approach being promoted is to teach that because a person is white, they are necessarily racist and privileged.’

‘Isn’t this the type of thinking we are trying to eradicate?’

Some of her colleagues took umbrage at her position and determined that she was no longer “fit” to be chair of the department.

‘They contended that my opposition to the growing, racial essentialist philosophy could potentially cause our patients to mistrust our department, create division among staff, and reflect negatively on the hospital.’

Gustilo also alleges that the department began to shift away in recent years from an emphasis on ‘multicultural care’ to one of ‘segregated care.’

She says that the new policy instituted by the department had ‘black caregivers assigned to black patients.’

‘Why would people who claim to fight racism want segregation?’ Gustilo says.

Dr. Gustilo says that the department lied about her performance in order to remove her from her position.

The department moved to demote her by using her perceived incompetence as a pretext, she says, knowing that removing her from her position because of her political positions was illegal.

‘They lied about my performance to burn my professional reputation and get rid of me that way,’ she claims.

Gustilo says she was told she was ‘late to meetings’ and ‘had poor communication skills.’ ‘I oversaw the OB/GYN department for six years without any of these complaints ever being made before.’

When she ‘pushed back’ against her demotion, a human resources manager admitted that she was being punished for her political views, she says.

Dr. Gustilo is now suing her employer for discrimination because of her views. She also claims that her bosses violated her constitutional rights for opposing the hospital’s affiliation with BLM.

Her case has been taken up by an attorney with the Foundation Against Intolerance and Racism (FAIR), which describes itself as a “nonpartisan organization dedicated to advancing civil rights and liberties for all Americans, and promoting a common culture based on fairness, understanding, and humanity.”