Some big changes are coming to COVID testing. Here’s what you need to know.

A major recall was recently announced by the Food and Drug Administration (FDA) on the Innova SARS-CoV-2 Antigen Rapid Qualitative Test because it was never approved for use. The FDA sent a warning letter to Innova in June about marketing their product for commercial distribution without approval.

Rapid Antigen tests are nasal swab tests that could provide a result between 15-30 minutes. They are seen as less reliable than the PCR tests which can take up to 5 days for results.

Innova describes itself as “the world’s largest manufacturer of rapid antigen tests and leader in COVID-19 testing solutions globally.”

According to the FDA announcement, “The FDA has classified the recall of this test as a Class I recall, the most serious type of recall.”

The recall was issued for several reasons:

In June, the CDC issued an alert for testing centers to stop using the Innova SARS-CoV-2 Antigen Rapid Qualitative Tests.

This particular test made by Innova was providing both false positives and false negatives, but at least there’s still that “reliable” PCR test, right?

The Polymerase Chain Reaction (PCR) test has been seen as the “gold standard” in COVID testing since early on in the pandemic. However, some critics have said that it is far too sensitive and risks false positives — especially as the virus continues to spread. This is because “dead” virus that is no longer transmissible could be detected in a sample and register as a positive result.

In a July 2020 interview on an infectious disease podcast, Fauci  warned that the sensitive PCR tests might, if allowed to progress through too many amplification cycles, return a “positive” result when it was actually just detecting “dead nucleotides.”

The World Health Organization earlier this year warned in a medical product alert that PCR tests carry with them the risk of “false positives” because the test might only be picking up small fragments of the virus via heavy amplification.

Earlier this month, the CDC announced that it was going to withdraw the request with the FDA for “emergency use authorization” of the test and begin “transition to another FDA-authorized COVID-19 test” as of January 1, 2022. 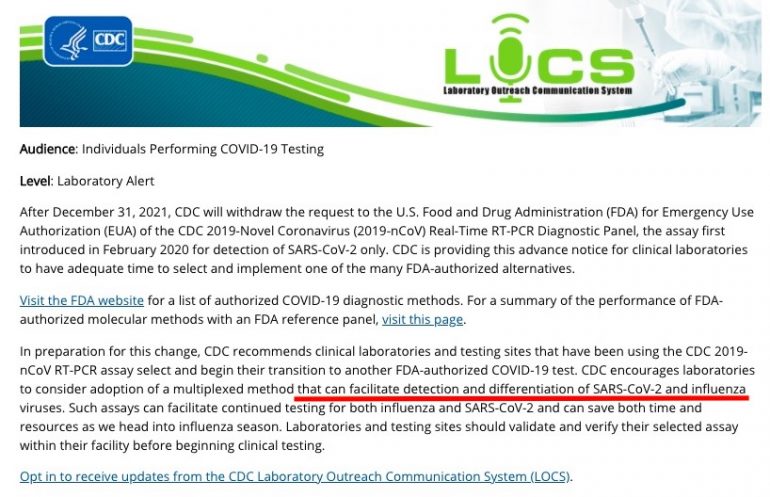 In April, Scientific American reported that the flu had “virtually disappeared” and provided a graph that shows how the flu rate was negligible during the 2020/2021 flu season. 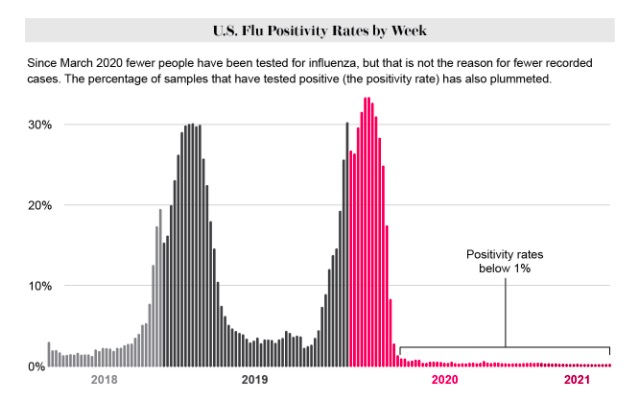 The Epoch Times reports that the CDC has devised a “multiplex assay” test is able to differentiate between SARS-CoV-2 and influenza viruses.

The CDC’s testing tool, the 2019-Novel Coronavirus (2019-nCoV) Real-Time RT-PCR Diagnostic Panel, because it was developed and made available in the very early stages of the pandemic, is only able to detect the presence of SARS-CoV-2 and not other disease agents.

The multiplex PCR tests that the CDC says already have already been granted emergency use authorization allow multiple targets to be simultaneously amplified in a single tube, making it ideal for high-volume analyses of multiple indicators of disease at the same time.

Its Influenza SARS-CoV-2 (Flu SC2) Multiplex Assay, authorized in July last year, is a “real-time reverse-transcription polymerase chain reaction (RT-PCR) test that detects and differentiates RNA from SARS-CoV-2, influenza A virus, and influenza B virus in upper or lower respiratory specimens” from individuals in the acute phase of infection. Currently, none of the emergency use diagnostic tests have been approved by the FDA.

In addition to that, it seems that billionaires Soros and Gates have both joined a consortium to purchase a manufacturer of rapid COVID tests in the United Kingdom.

Billionaires George Soros and Bill Gates are part of a consortium set to buy Mologic, a U.K.-based maker of Covid tests, in an effort to increase access to “affordable state-of-the-art medical technology” around the world, according to a statement released Monday.

The Soros Economic Development Fund and the Bill & Melinda Gates Foundation announced the launch of a new initiative, Global Access Health (GAH), aiming to strengthen the global rollout saving medical technology and the subsequent acquisition of Mologic Ltd, best known today for the deep-nostril technology used to deliver rapid Covid-19 tests. The technology can also be used to test for dengue, bilharzia and river blindness.

The rapid so-called lateral flow tests offer an early-warning screening for Covid-19 and have been used around the world as an aid to help reopen shops, bars, sporting events and workplaces by giving an early warning result for people who may have no symptoms but are still infectious and can give the virus to others. In the U.K., lateral flow Covid tests need to be confirmed by a second test before Covid-19 is officially diagnosed.

Ah, yes! The billionaire leftists are cashing in on the COVID bucks. Who could have seen that coming?