When exactly did “15 Days to Slow the Spread” evolve into completely eradicate the virus from existence and turn off your humanity?

Early in the pandemic, governments chose to initiate lockdown measures to prevent the spread of the virus. We were told that it was to prevent hospital systems from being overwhelmed by a new virus that we didn’t know all that much about.

But there were some jurisdictions that really embraced the lockdown measures, and one of them was Australia.

Australia has had some of the most restrictive lockdown measures in the entire world — and that includes less free non-Western countries like China and North Korea.

Australia was celebrating that their approach of stomping on all individual liberties was successful at eliminating the virus.

Authorities in Australia were high-fiving themselves when they were able to have a “relatively normal” Christmas while the rest of the world was locked down.

Let’s recall that Australia is an island that restricted travel and that Christmas is at the beginning of their summer.

Australian officials are now panicking due to a spread of cases deep into their winter season, and despite embracing the asinine “Zero COVID” model which aims to completely eliminate the virus from a country using heavy-handed lockdowns that severely curtail individual liberties, their approach seems to be failing.

Now, more than half of the country is in lockdown. Australia’s population is just shy of 26 million, and according to Worldometer, has a little over 1,400 active cases of the coronavirus. 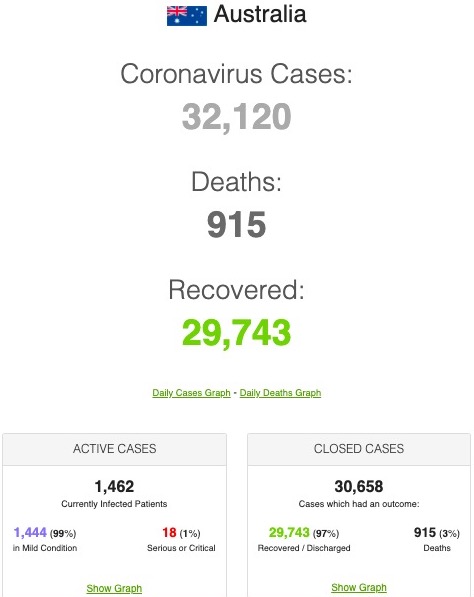 Australia’s most populous state New South Wales (NSW), of which Sydney is the capital, is battling the worst COVID-19 outbreak of this year, with total cases exceeding 1,400 since the first case was reported more than a month ago in a limousine driver who transported overseas airline crew.

NSW authorities reported a slight slowdown in new cases on Tuesday as infections fell to 78 from 98 a day earlier as Sydney and some surrounding areas endure a fourth week of lockdown.
Source: Reuters via MSN

The New South Wales Chief Officer of Health, Dr. Kerry Chant, is encouraging Australians to become hermits and not engage in conversation. She said that even though being “friendly” is human nature, “now is not the time” to be a social creature.

“Whilst it is in human nature to engage in conversation in conversation with others, to be friendly, um, unfortunately, this is not the time to do that. So, even if you run into your next-door neighbor in the shopping center in the Coles — whilst you’re at the Coles or Aldi or any other grocery shop, don’t start up a conversation. Now is the time for minimizing your interactions with others. Even if you’ve got a mask, do not think that affords total protection. We want to be absolutely sure that as we go about our daily lives, we do not come into contact with anyone else that would pose a risk,” said Chant.

Shut up and do as you are told little peasant.pic.twitter.com/ltAXdcp2OQ

So many people on social media have said that this is “temporary” and that “you’ll always have next year.” Really? The North American lockdowns took effect on Monday, March 16, 2020, and were just supposed to be “15 Days to Slow the Spread.” Now we have borders that are still closed, businesses in some places with capacity restrictions, and masks are still mandated in many places.

It’s not looking very “temporary” even with multiple vaccines and an entire year learning about the virus.

There are pushes for mandatory vaccination of children with an experimental vaccine that has had no long-term study as well as those who have recovered from the virus and already have natural immunity. There is a growing movement to enforce “vaccine passports” before we can return to “normal” and vilify those who don’t want to take the vaccine as “anti-vaxxers.”

Nevermind that people that are suffering from the lockdowns — mental health issues, addiction, and severe depression are on the rise. People are suffering in other ways due to their employment situation, isolation, and kids unable to go to school or be kids.

But this “Zero COVID” harpy doesn’t want you to see how you’re neighbor is doing. She doesn’t want you to ask how their depressed teen with an eating disorder is, or if your neighbor whose business got shut down by the government is able to still make that mortgage payment.

Because, to her, the only thing that matters is preventing the spread of a disease that the most vulnerable have been administered a vaccine that is over 90% effective and has a case fatality rate of fewer than 0.5% for every age group other than those over 70 and that is because they’re liable to have more comorbidities.

This lecturing shrew wants you to set aside your humanity because of an airborne virus. And she thinks that’s okay.

But remember, these rules don’t apply to really important people — like celebrities. The most recent outrage was a few days ago when Caitlyn Jenner flew there to be on Celebrity Big Brother while planes fly in empty because of travel caps.

Australia… What has happened to you?