When we spend our time in civilization, it’s easy to forget just how vulnerable we are when we venture out into the wild … until you read harrowing stories like this one.

Richard Jessee does not need any reminding of how dangerous the wilderness can be. He is a gold prospector, and danger is part of the job. But that danger got turned up to eleven when a grizzly decided to take an interest in the Richard and the ATV he was using to tow his gear home from his work site.

The bear pounced on him, and ‘rolled my bike and my trailer over like it was a toy car.’ The ATV sank into the water and took his cellphone with it.

After firing a shot at the bear with his pistol, Jessee was able to escape to his cabin, where the bear continued to attack the cabin walls, windows and doors. “There was no doubt about it: the bear was trying to get into my cabin,” he said. “I don’t know why it was so aggressive. Maybe it had cubs nearby.”
Jessee hid in his cabin for several days waiting for help. He placed a big piece of plywood on the roof reading “SOS,” and waited for someone to see it.
“I wasn’t sure of the days; I was in shock,” he said. The bear returned several times while he waited, harassing him and keeping him awake for several days. After four days, help finally arrived when a Coast Guard helicopter flew overhead.
On Friday, July 16, Lieutenant Commander Jared Carbajal was piloting a helicopter for a mission in Nome and took an atypical route due to cloud and weather concerns.
“We were flying near a lot of old mining sites, and my copilot noticed a guy waving at us,” Carbajal said in an interview with the Nugget.
“He was waving two hands over his head, and that’s usually sign of distress, so we turned to fly over to check it out and make sure he was okay. As we came up, we noticed on top of his roof, he had painted ‘SOS HELP ME.’” –NomeNugget 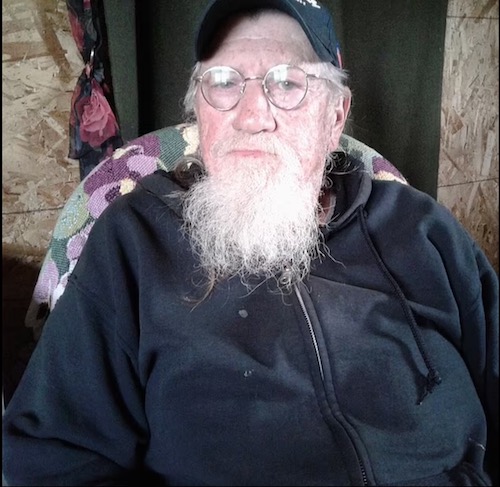 Richard got off easy. He had some bumps and bruises, and a knee injury, but nothing too serious. Oh, and here’s a photo of where he rode out that bear attack. It’s easy to see why he didn’t get a lot of sleep. 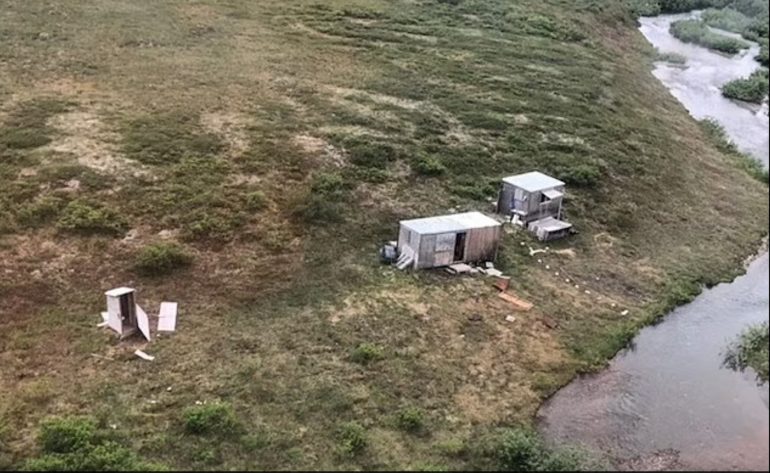 Did he learn any lessons from the experience? Yes, he did.

According to Jessee, there were as many as 25 bears spotted in the area around his cabin.
“The big lesson here is that I shouldn’t go out by myself,” he said. “I’ll never do that again. I’m a very lucky man.”
Jessee has been mining in Nome for the last 21 summers, and his cabin is near several of his friends.

…Jessee’s friends reported him overdue to the Alaska State Troopers on Friday, the same day the Coast Guard crew independently spotted him.
When planning to leave areas with cell phone service, Carbajal [the pilot that spotted him] recommends individuals tell friends and family when they leave, and when they expect to return. He also recommends bringing along a satellite device. –NomeNugget