Tucker Carlson’s reaction to the public confrontation of his views shows what kind of a guy he really is.

On Saturday, the Fox News host was confronted in a bait shop in Montana where a man called him “the worst human being known to mankind” and had someone capture it on video.

Dan Bailey, the man in the video smugly lecturing Carlson was upset about his position on the coronavirus and vaccinations.

Carlson tries to keep the situation from becoming a scene and says, “My daughter is here” and Bailey replies, “I don’t care, man” and continues on his rant.

Let’s not forget that Tucker Carlson had to move to another state because he was being harassed by leftists and the New York Times was preparing to dox his new address. His children have been harassed in public.

Dan Bailey had someone film the interaction at the store in the city of Livingston and shared it on Instagram.

The 22-second clip, which has garnered more than 113,000 views as of Sunday morning, begins with Bailey appearing already engaged in a conversation with the Fox News host.

Bailey has a wide smirk while Carlson appears more withdrawn and whispers, ‘My daughter is here,’ to which Bailey says, ‘I don’t care man. You are the worst human being known to man. I want you to know that.’

As he talks, Carlson notices he is being recorded on a camera and gives a grin.

The Fox News host says, ‘Settle down son,’ to which Bailey says, ‘Son? Don’t call me son,’ before Carlson walks away with Bailey trying to follow him as the video ends.
Source: Daily Mail

In a strange coincidence, the fly fishing store where the interaction occurred was called “Dan Bailey’s Outdoor Co.” and they posted a statement to customers that the Dan Bailey posting the video wasn’t connected to the store at all.

They wrote, “On July 23, a well-known television personality, Tucker Carlson, was affronted while shopping at Dan Bailey’s Outdoor Company. Coincidentally, the person engaging Mr. Carlson was a local resident named Dan Bailey. This person has no affiliation with our business, other than he shares the same name as our founder, who passed away in 1982. To be clear, we treat every customer equally and respectfully. Our staff was professional to Mr. Carlson, as we are with all of our customers.”

The video posted onto Bailey’s Instagram account has had over 260,000 views. It really stands out from his other photos of him enjoying the outdoors with family, friends, and dogs.. It appears to be one of two “political” posts on his feed, the other being a photo of a “F**k Donald Trump” sticker with the caption, “I can’t say I disagree… #peopleofdenverhavespoken.”

Bailey captioned the video, “‘It’s not everyday you get to tell someone they are the worst person in the world and really mean it! What an a**hole! This man has killed more people with vaccine misinformation, he has supported extreme racism, he is a fascist and does more to rip this country apart than anyone that calls themselves an American.” 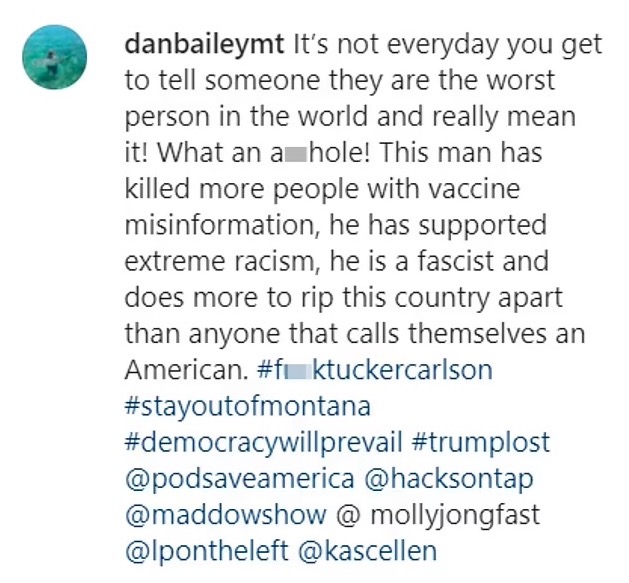 This guy just wanted 15-minutes of fame and used Tucker Carlson to do it.

By the look of the grin on Carlson’s face, he knew that was precisely it, so he tried to leave once he saw the camera.

Not cool confronting a guy in a bait shop. He’s just there because he loves to go fishing not talk about politics or public health mandates.

Carlson has said in interviews that he loves fly fishing and finds it relaxing.

Back in 2013, he was spotted fishing in Central Park by a YouTuber that goes by @JoeyBoots and the interaction was really interesting.

Kinda looks similar to the one with Bailey, doesn’t it?

Now, contrast that with how Chris Cuomo reacted when he was confronted in public and called “Fredo” back in 2019.

But then, it doesn’t seem to have worked very well for Dan Bailey.