For a court ruling that rested its authority on ‘penumbras’ and ’emanations’, the eventual challenge of Roe v. Wade was a question of ‘when’, not ‘if’. That day may now be here.

Why else would the left have invested so much energy into making Roe v. Wade a litmus test for judicial nominees, if not for the fact that it stood on a shaky foundation?

Now, that foundation is being directly challenged by a Mississippi AG as an unconstitutional affront to federalism and states’ rights to enact laws, including laws governing abortion.

The Supreme Court will be hearing a case in the fall concerning Mississippi’s law to ban abortion beyond 15 weeks into pregnancy, except in cases where there is a medical emergency or severe fetal abnormality.

Lynne Fitch, Mississippi’s first female AG, filed a brief with the court in which she defended the law, but went further than that.

On July 22, Fitch filed another brief with the court, this time explicitly asking for Roe v Wade to be overturned. “The national fever on abortion can break only when this Court returns abortion policy to the states,” she wrote. Fitch added, “The Attorney General asks the Court to consider the policy and cultural shifts that have occurred in the 30-50 years since Roe and Casey and argue that the precedent set in these cases shackle states to a view of facts that is decades out of date.” She concluded, “It is time for the Court to let go of its hold on this important debate.” —MEAWW

The sixty-page brief (link here) gives not just one line of argument to make their case, but several.

Places like CNN are just dropping some of the more spicy pull quotes from her brief. But since we appeal to our readers’ minds, and not just their emotions, here’s a screenshot of the outline of that argument to give our readers a sense of the shape those arguments are taking. 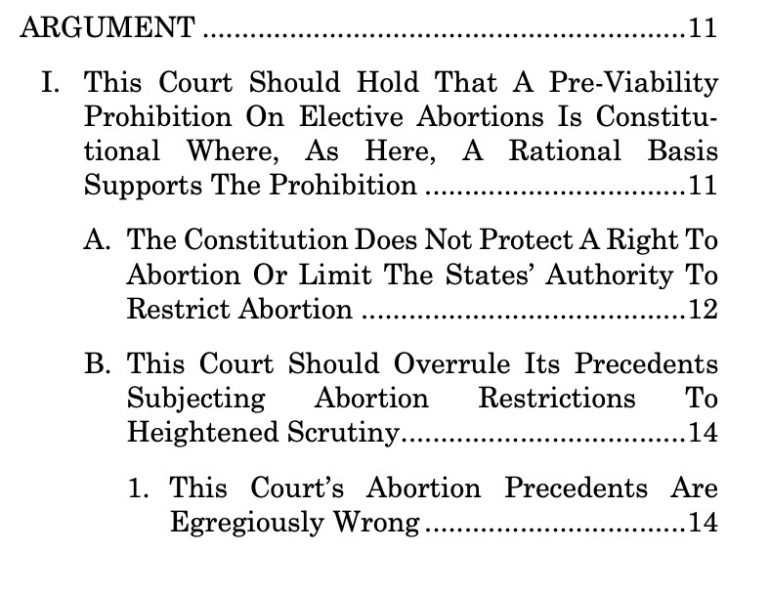 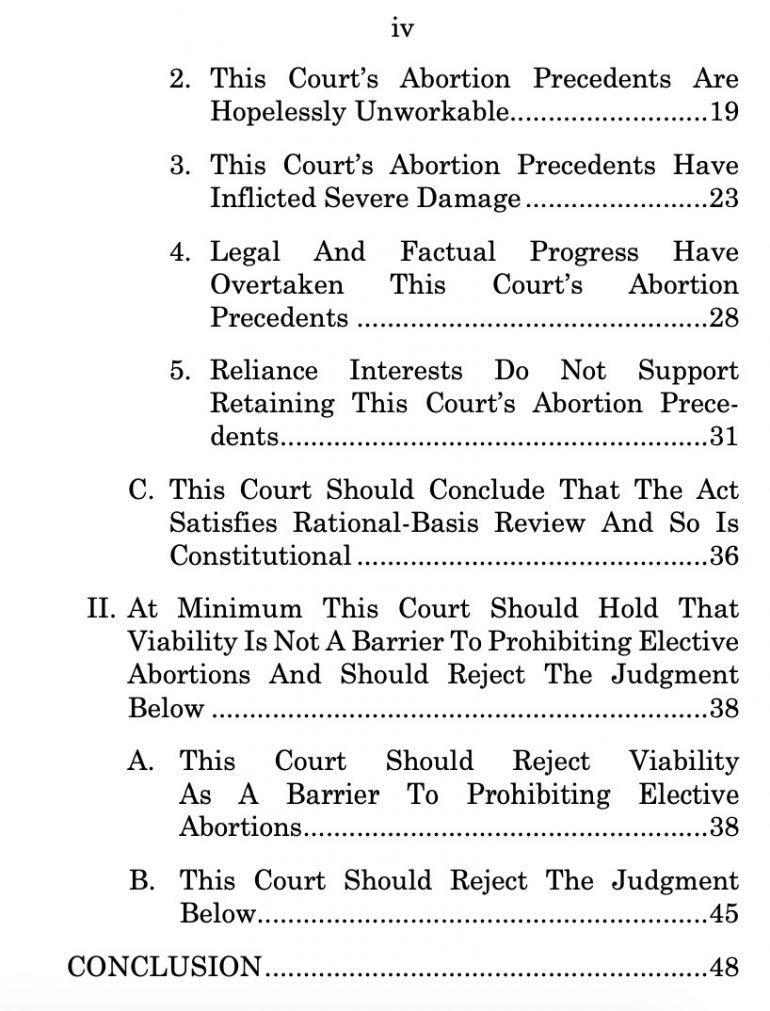 Here is the text under the heading, SUMMARY OF ARGUMENT.

I. This court should hold that a State may prohibit elective abortions where, as here, a rational basis supports doing so. The Constitution does not protect a right to abortion or limit States’ authority to restrict it. On a sound view of the Constitution, a state law restricting abortion is valid if it satisfies the rational-basis review that applies to all laws. Rational-basis review is not applied to abortion laws because this Court’s precedents suject such laws to heightened scrutiny. This Court should overrule those precedents. Those precedents are grievously wrong, unworkable, damaging, and outmoded. Reliance interests do not support retaining them. This Court should conclude that the Act rests on a rational basis and so is constitutional. The Act reasonably furthers valid interests in protecting unborn life, women’s health, and the medical profession’s integrity. The judgment below should be reversed.

II. At minimum, this Court should reject viability as a barrier to prohibiting elective abortions and reject the judgment below. A viability rule has no constitutional basis, it harms state interests, and it produces other severe negative consequences.

After all, Justice Thomas has already been openly critical of Roe v Wade, calling it ‘grievously wrong for many reasons’.

The pro-abortion crowd will be, predictably, incensed.

Roe v Wade is about far more than just the ‘reproductive rights’ of a woman they claim to care so much about. Abortion is a way to avoid the unwanted consequences of irresponsible casual sex on one hand and a cash cow of absolutely titanic proportions for leftist causes on the other.

Planned Parenthood dropped Millions of dollars into the Virginia Governor’s race that elected Klan-man/Blackface yearbook guy. And why do we remember him as the guy with the scandalous yearbook? Because it took a scandal about him wearing blackface to change the channel from his damning public statements about infanticide.

The Dems will scream and cry about the suffering of women. But we remember their damning silence in refusing to acknowledge the Gosnell atrocities.

We at ClashDaily have been impressed with the stand she is taking on this issue.

Will she win? You never know who’s going to win any fight until the victor is declared. But she’s got the moxie to get in the ring. We respect that.